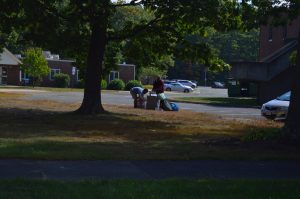 The familiar sight of students and parents contending with piles of college supplies looked a little different this year with COVID-19 taking away the typical large move-in crowds. (PETER CURRIER PHOTO)

WESTFIELD- Students finally moved back into Westfield State University this weekend after the campus had been largely vacant since March due to the COVID-19 outbreak in the state.

Move-in day at the university is typically associated with large crowds of students and parents filing in and out of their respective dorms, usually all in one day.

This year, however, COVID-19 changed the feel of the day, and the campus was mostly quiet in comparison with years past. The move-in process was spread across three days with students being assigned a certain day to move-in to avoid crowds as much as possible.

Signs were posted across campus advising students and parents of the guidelines that must be followed through the whole semester. Those include mandatory mask wearing outside of one’s room, social distancing wherever possible and hand washing as often as possible.

While move-in day is typically a day of excitement at Westfield State, students reported a feeling of nervous excitement, but also relief to be able to get back to something that resembles normal.

Jensen Giroux, a sophomore who moved into one of the suites on campus Saturday afternoon, said that the process to move in was going much more smoothly than she anticipated. She said that even when students were on campus in March as the outbreak spread throughout Massachusetts, she never felt like she wasn’t safe.

Students have been remote learning for the first month of the semester, the only state university in Massachusetts to do so. While the remote learning period may have been necessary to get the campus ready for students, Giroux said she is ready to be back in a classroom.

“I think it’s time. I feel like I was teaching myself a lot of information. I’m just working for the test and I definitely need an in-class setting,” said Giroux.

Nicholas Lecce, a freshman moving into a college dorm for the first time, also said he was nervously excited, but mostly to be moving into a new place. He too, was taking part in remote learning for the first month of school, which he said he did well with. He did choose to have four of his five classes be online.

Lecce’s father, Nick Lecce, said that he was excited for his son to officially start the college experience.

“I’m excited for him. It’s a new chapter in his life. Hopefully he does well,” said Nick Lecce, “So far everything has been nice, people have been friendly here. Clean, organized, there are signs everywhere about washing your hands. You’re doing everything you can to deal with COVID.”

The first day of in-person learning at WSU is TSept. 29.

As students went through the move-in process, they also took part in an onboard COVID-19 testing system. Students are scheduled to be tested three more times throughout the semester for asymptomatic testing. Tests will also be available for students if they believe they have been infected with COVID-19. Those who test positive will either be asked to quarantine at home or to quarantine in one of the designated dorms on campus for two weeks or until a negative test can be produced.