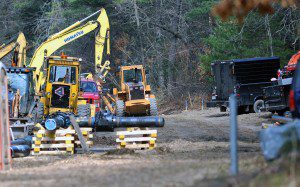 WESTFIELD – The growth of electric and gas services are tied to the current economy, with little growth in one and historic growth in the other.
The municipal utility currently serves 17,477 electrical customers and 9,681 natural gas customers.
Westfield Gas & Electric General Manager Dan Howard reported to the Municipal Light Board last night that growth in the number of new electrical customers is at a 10 year low, a trend that the utility expects to continue, while the number of new gas customers is hitting a “historic” high.
Howard said electric service expansion is directly related to new growth, especially residential growth, which has been hit by the economy. The department is projecting that only 24 new electrical services will be added this year compared to the 10-year average of 61 new customers. The highest growth period of that 10-year average were the first five years, when the average was 70 new services, peaking in 2004 at 80 new customers.
Howard said the projection is that new electrical services will continue to decline for the next five years.
“This expectation directly correlates to the continued slow down of new home building in Westfield,” Howard said.
Conversely, the expansion of the municipal utility’s gas service reflects the rise in the cost of home heating oil, a fact that the utility is exploiting through an aggressive expansion of its gas distribution network.
Howard said the department projects capturing 200 new gas customers this year as the expansion of the gas distribution system is pushed out into neighborhoods.
“This is historically one of the busiest years we’ve had on the gas side,” Howard said. “We’ve done a tremendous amount of work over the past five years” to improve and expand the gas distribution system.
The projection of 200 new gas customers this year exceeds the banner years of 2008 when 161 new services were installed and 2011 when the utility added 153 new gas services.
“The construction of single (family) homes is slow, including the sale of existing homes,” Howard said. “The increase of new gas services is due to the high price of oil, as well as new gas main installation in the city and an aggressive marketing campaign.”
Howard said the utility has completed installation of new gas lines in Foxhill Drive, Yankee Circle and Darby Drive and has scheduled installation of new gas mains in Stuart Circle, Butternut Road, Old Farm Road, Country Club Drive, Fern Drive, Rambling Drive, and Rosedell Drive.
Those new gas mains allow the utility to capture residents of those neighborhoods, giving then a second energy option to heat their homes and for hot water, cooking and other home uses.
The Department began that expansion with the installation of the Southwick Gas Lateral Line project, a new source of natural gas off the Tennessee pipeline. That project dramatically increased the utility’s gas supply, which had been limited in the past, restricting expansion of gas service in the city.
The expansion of gas service into unserved neighborhoods followed that pipeline project, substantially increasing the pool of potential gas customers.
Commission Robert Paul asked for a strategy to anticipate future gas demand and expand gas service to areas of the city where new residential and commercial development is expected.
“Where should we be expanding, we have the capital to expand the network, we should be doing that now,” Paul said. “Our long-range (strategic) plan does not reflect customers having energy of choice capabilities, we don’t have the right network, we’re not pushing out, making a capital investment to do that while we’re in position, while we have that capability and capacity.”
Commission Chairman Tom Flaherty said there is a risk to that “if we build it, they will come” strategy. “What if we do build it and they don’t come, how do we answer to our ratepayers for that unused capital expenditure.”
Howard said the department has identified the northeast quadrant of the city, north of the Massachusetts Turnpike and east of Southampton Road, as the area with the greatest potential growth, both residential and commercial, and is already expanding gas distribution in the area of the Barnes Regional Airport.
“We look at every opportunity to serve anybody,” Howard said. “If there is a demand in a certain area, we’ll get service there, as long as the payback is there.”
Paul also asked if the management has identified the largest fuel-oil users in the city with the potential of converting those to gas service.
Howard said that has been a major part of the planning process and that the department has indeed captured the largest heating oil customer, Westfield State University, extending a looped gas main to allow the university to go to a dual-fuel capacity.
The department has also extended natural gas service to the Lane Quarry, which has relied on oil in the process of making asphalt.
“So we have captured those large oil users,” Howard said.