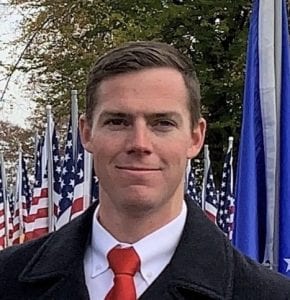 WESTFIELD – The Special State Election March 31 is currently still on schedule as candidates change their campaign tactics in light of COVID-19 restrictions.

John C. Velis, a Westfield Democrat and current state representative, and John F. Cain, a Republican, Southwick resident and Agawam business owner, are both seeking the 2nd Hampden and Hampshire Senate seat in the election. The seat was vacated when former Sen. Donald F. Humason Jr. was elected Westfield’s mayor.

Both candidates’ campaigns have been affected by efforts to limit the spread of the virus.

Velis announced March 13 that he was suspending door knocking efforts.

“I last knocked doors on Tuesday, March 10, and for the first time when I went to shake someone’s hand, they pulled away,” Velis said. “That was a sign to me right away that I no longer need to be even putting the people of this district in that situation.”

Velis said the world is in unfamiliar territory and he was saddened that he had to cease that effort.

“It pains me personally because door knocking and personal contact — I’ve already knocked thousands of doors throughout this campaign – is what I savor the most in seeking public office,” he said. “However, my firm belief is that accessibility of the candidate is imperative when running for office, so in lieu of my face at your door, I can be reached via phone at (413) 285-3047 or email at [email protected]”

Cain announced March 17 he would no longer have direct contact with residents and has decided to utilize mail, social media and other tools to get his message out to the voting public.

“We will be hosting a Virtual Town Hall on Facebook on March 23 and I encourage voters in the district to join,” said Cain. “They can ask questions in the messages and I will respond to them live via their home computer. It is important that people know the differences between my opponent and I.”

Cain also said daily video messages on critical issues will be posted to his Facebook page.

Westfield Election Clerk Marisa Colon said Bill HD-4928  is awaiting a vote by the state legislature that would allow Secretary of State William F. Galvin to amend the election process.

Colon said the bill was first introduced in 2013 and has been amended several times, however, as of press time no vote for special legislation was taken.

Voting places are considered a transition space, not a gathering space, and are currently exempt from Gov. Baker’s orders to restrict gatherings to 25 people or less. Colon noted that there is rarely 25 people in the room during voting, and staff and poll workers would take extra precautions to keep the polling stations clean.

“We will have poll workers cleaning surfaces and pens and machines,” Colon said, “and people are welcome to bring their own pens.”

Absentee ballot application request form can be downloaded at sec.state.ma.us or a letter requesting a mailed absentee ballot can be sent to Colon at [email protected] The letter must contain: Your Full Name, your legal voting address (home address), your mailing address (if different from home address), the State Election date-March 31 or all elections, and it must be signed (cursive font is unacceptable.) As soon as you receive your ballot, follow enclosed instructions. Return ballot either by mail to the City Clerk’s Office or you may drop it into the black Drop Box outside of City Hall by noon March 30.