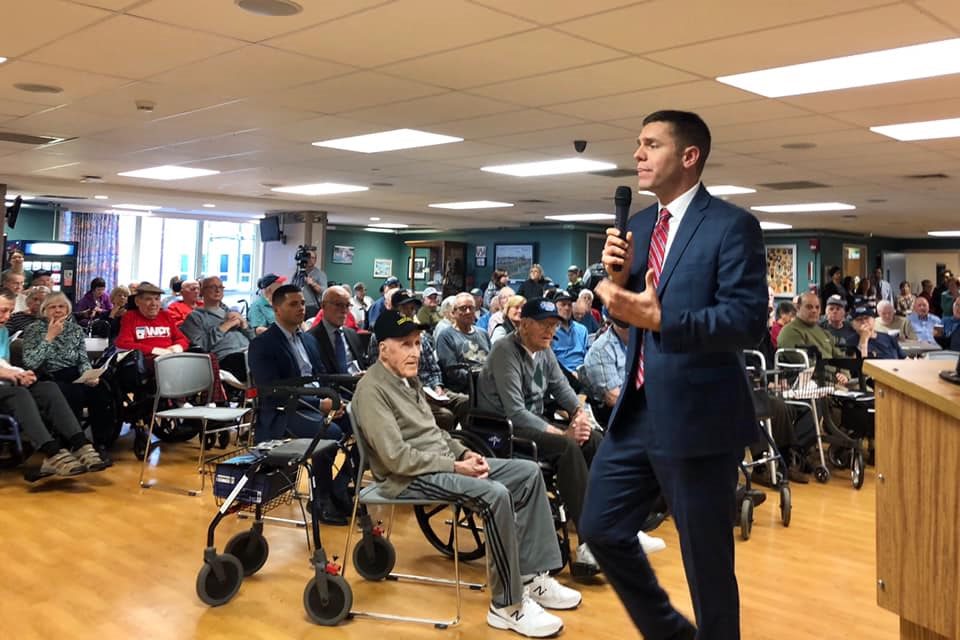 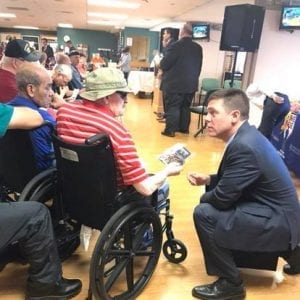 State Sen. John C. Velis speaks to a resident of the Soldiers’ Home at Holyoke in 2017. (JOHN VELIS PHOTO SUBMITTED)

The letter was signed by more than 80 state senators and representatives with significant support from both parties. It asks that the number of beds in the plan be increased and that a formal plan for a behavioral health unit be included.

“I do not believe that the recommendations put forth by the architecture firm, Payette, will meet the future needs of our veteran populations,” said Velis, who represents Holyoke and the Soldiers’ Home. “From a diminished bed count to a lack of preparation for the challenges our future veterans will face, there are many ways that this plan should be improved. A new facility is badly needed, but it needs to have the capacity and resources necessary to be sustainable for years to come.”

One of the letter’s main critiques is that the current proposal for a new facility only includes 192 beds, a decrease from the current capacity of 235. Although resident numbers at the Home are currently under that due to COVID-19’s impact, Velis said that the proposed facility does not paint an accurate picture of what the future demand for beds at the Home will look like.

“Any future military conflicts or possible wars would increase our veteran population levels exponentially. It is also impossible to predict how many National Guard and Reserve members will achieve veteran status in the years to come and therefore be eligible to live at the Home,” said Velis, who noted how many members have been activated in recent months to respond to the COVID-19 pandemic. “2020 was the busiest recorded year for the Guard since WWII, and just this week two National Guard Generals stated that the number of National Guardsmen needs to be greatly expanded to meet their demands.” (https://www.stripes.com/news/us/busiest-year-everfor-national-guard-shows-the-force-should-be-bigger-two-generals-say-1.660357) 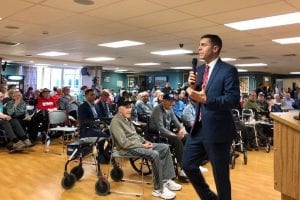 The letter also notes that the Payette’s analysis did not take into account the full extent of the Home’s waitlist. While Payette determined that 41 veterans are currently on the waitlist, Velis emphasized that this determination did not account for many veterans who had passed away or rescinded their application after the tragedies this past spring. The senator also added that it is imperative to remember that the waitlist analysis was conducted during the COVID-19 pandemic and subsequently the application rates observed may be superficially low.

“The Veterans Affairs Demographic Study that Payette relied upon doesn’t take several critical factors into account and it also only projects what the Veteran population will be until 2035,” said Velis, who is a veteran and major in the Army Reserves.

“Veterans are going to be relying on this Home for decades past that point and it is critical that their needs are taken into account,” said Velis. “We’re going to have Veterans coming back with amputations, with traumatic-brain injuries, and with long-lasting burn pit effects. We need to be absolutely certain that the future Home can provide the care they need and deserve.

“I know the Administration and Legislature have the same common goal here, and I hope that our input is considered as we move towards the Construction Grant application deadline,” he added. “When it comes down to it, we need to think about thirty years from now when a family calls the Home to get their loved one in. If the choice is between filling a vacancy or turning a Veteran away, the choice is abundantly clear.”