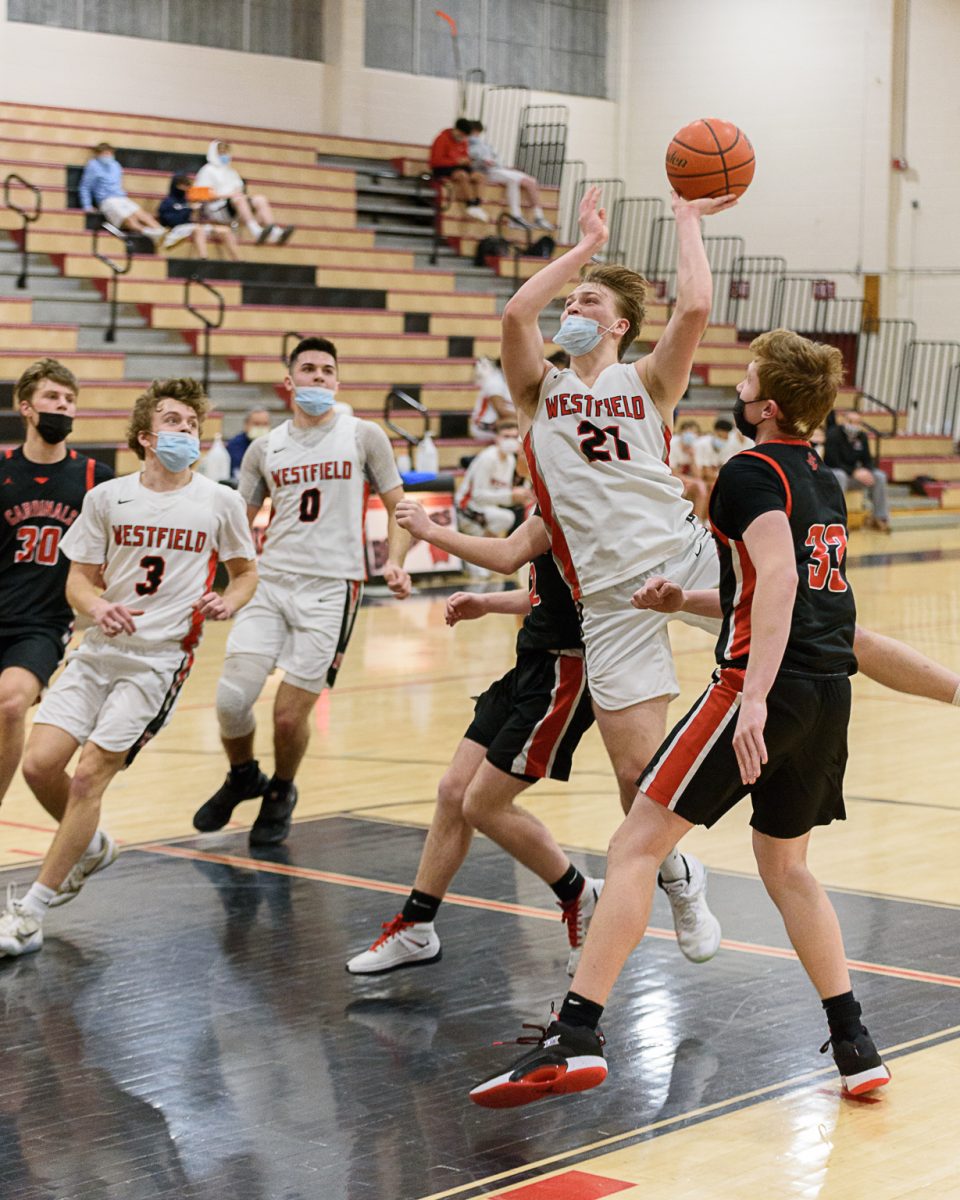 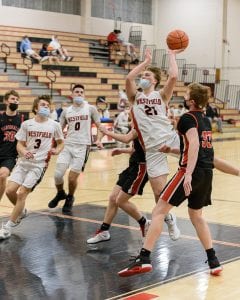 WESTFIELD – While Tuesday’s snowstorm allowed area kids to enjoy some downhill sledding, it was an uphill climb for the Westfield High School boys basketball team.
Pope Francis put together a double-digit lead in the first half and managed to stave off a late Westfield rally en route to a 62-59 win Tuesday in the Whip City. Cam Vedovelli (20 points) and Daijon Davis (15) combined for 35 of the Cardinals’ 62 points.
“They have good players,” Westfield boys basketball coach Josh Balestracci said. “I give all the credit to them. They did a good job tonight.”
Westfield rallied in the third quarter, only to have its momentum stopped twice by and-ones from Vedovelli. Then, when Pope Francis desperately needed a basket in the fourth quarter, the Cardinals turned to Davis, who drove into the paint and was often bailed out by a Bombers’ foul.
Pope Francis made an astounding 22-of-24 free throws with all but three of those made foul shots coming from Davis and Vedovelli. Westfield converted just 9-of-22 from the stripe.
“We didn’t shoot nearly as many (free throws) as them and we didn’t shoot nearly at the clip that they did,” coach Balestracci said. “We had a tough time at the free throw line. We missed a lot – – some of those were front ends of 1-and-1s – – so we could have had opportunities on both sides.”
Nick Anciello led Westfield’s offense, scoring 20 points. Ten of those points came in the third quarter as Anciello attempted to spur a comeback. Bombers’ David Tirrell finished with 14, including two key 3-pointers in the fourth quarter.
Despite trailing for most of the game, Westfield managed to make it a one possession game late in regulation. A two-pointer nearly pulled the Bombers within one point of a tie with 35 seconds remaining, but the shot rimmed in and out.
Westfield was forced to foul Davis, who iced the game with 1-of-2 from the free throw line. The Bombers made a shot just before the final buzzer sounded and attempted to call a timeout but time expired.
“We’ve got to find our skills a little better, continue to develop as ball players and just do the little things,” Balestracci said. “Every day, we just try to get a little bit better. You can’t take anything away from them. The kids busted their butts today.”