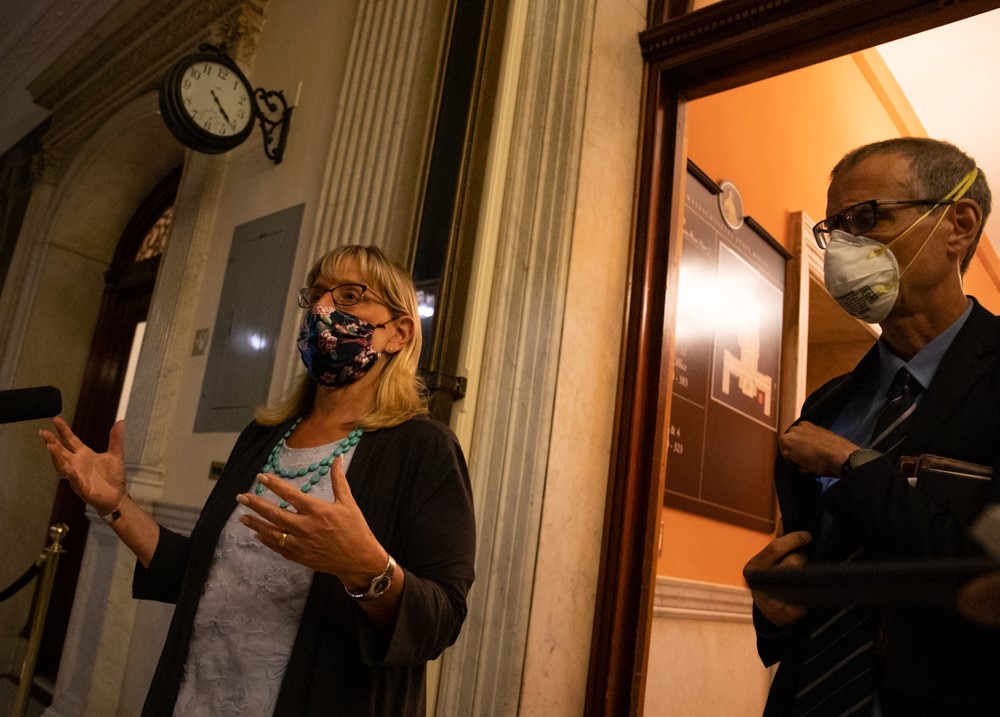 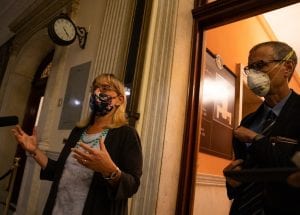 A clock on the corridor wall displayed the time — 4:20 a.m. — while Senate President Karen Spilka spoke to reporters outside the Senate Chamber early Tuesday morning, alongside Sen. William Brownsberger, after the branch passed a wide-ranging police reform bill during a marathon 16-hour session. (SAM DORAN/SHNS)

The vote came just after 4 a.m. following more than 16 hours in session.

The bill, which bans chokeholds, limits the use of tear gas, licenses all law enforcement officers and trains them in the history of racism, among other things, passed 30-7 and is now in the hands of the House of Representatives.

According to State House News, the Senate bill, which was developed after weeks of public protest around the country in response to the police killing of George Floyd in Minneapolis, would impose a new level of oversight on police that has been proposed for years on Beacon Hill, but has failed to gain traction until now.

It would also controversially scale back a legal protection for police and other public employees that currently shields them from civil lawsuits unless there was a clearly established violation of law. Democratic leaders, including U.S. Sen. Elizabeth Warren and U.S. Rep. Ayanna Pressley, weighed in to support the effort of Senate leaders to limit qualified immunity, while the state’s largest police union singled out that provision as one that would leave police officers second-guessing themselves on the job.

Velis said his reason for voting against the bill centered around qualified immunity. He said that portion of the bill needs more research and discussion.

“We don’t have enough information,” he said. “We need to do a deep-dive.”

Velis said he wants to hear from those who would be affected by the bill, including law enforcement, attorneys, judges and more.

“We need to hear from stakeholders. Our job is not to watch CNN or Fox News to get informed, it’s our job to vote in the best interest of constituents. I voted against this because we need to do due diligence,” Velis said.

Voting against the bill were Democratic Sens. Nick Collins of Boston, Anne Gobi of Spencer, Michael Rush of Boston, Velis of Westfield and Michael Moore of Millbury. They were joined in opposition by Republican Sens. Ryan Fattman of Sutton and Dean Tran of Fitchburg.

State House News reports that some senators offered sharp criticism of the process used to develop the bill, while others engaged in a spirited back-and-forth over the legal principles of qualified immunity and the need the act “urgently” to protect Black and other minority residents from discrimination.

“No one is saying that we don’t support our cops,” said Sen. Cindy Friedman, responding to critics who said the bill sought to punish police. But she pleaded with her fellow senators to show the same level of concern for everyone “shot, beaten or kicked” by police because of the color of their skin.

Velis offered an amendment that failed 16-24. The amendment proposed creating a special commission to study and make recommendations on qualified immunity within 180 days.

“This legislation does not eliminate qualified immunity, it rebalances it,” said state Sen. Jo Comerford.

Velis said last fall, while still Westfield’s state representative, he rode along with the Massachusetts State Police Violent Fugitive Apprehension Section and he thought of those officers when discussing the bill early Tuesday morning.

Velis said the day he rode with the Section, officers were searching for subjects wanted for opening fire into a vehicle driving on Interstate 91 in Springfield as well as suspects wanted in relation to a home invasion where a resident was tied up, beaten and set on fire.

“They’re going after very violent individuals,” Velis said. “Every time police kick in a door or pull a car over, it could be their last time for anything. So, from their perspective, I don’t think we looked into [the bill] enough.”

Velis noted he was in the minority among his fellow senate democrats, but he said he votes for his constituents and his conscience, not with a party.

Velis said he does support most of the bill and that thinking about George Floyd’s death pains him. Velis named several victims of crimes by police officers during his plea for an amendment. He also named several officers who died in the line of duty. He said all those people deserve for this bill to be right.

“Anything less than doing this right is a disservice to them all,” he said.