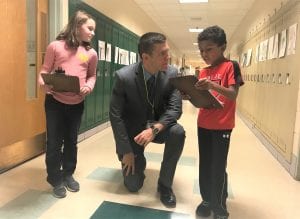 Velis said March 16 that with schools set to reopen April 7, many students would miss the first planned set of tests and would not be able to prepare from home to take them upon return to the classroom.

“To have the MCAS with a lack of classroom time for students to prepare . . . to hold them accountable is absurd,” Velis said.

Velis said he was particularly concerned for the education of students on Individualized Education Plans.

“As the product of special education and an IEP, it’s not fair,” he said. “To have these kids take the MCAS defies logic.”

Velis said Monday morning he would spend much of his day combing through bills related to COVID-19, including special legislation to cancel MCAS this spring.

Velis said once Gov. Baker March 15 announced schools would be closed across the state until April 7, bars would close, restaurants would be takeout only and gatherings of more than 25 people in public were banned, his phone began ringing.

“From about 6 p.m. to midnight I was getting text messages and phone calls from people wondering if they should go to work, and if they didn’t, would they be paid,” Velis said.

Velis said he is concerned about the financial ramifications for families, especially for parents whose children are home and they have no other option but to stay home with them.

Velis said health was the number one priority but he had concerns.

“We need to break the spread,” he said, “but there are consequences. People need to make their car payments, mortgages, pay for childcare.”