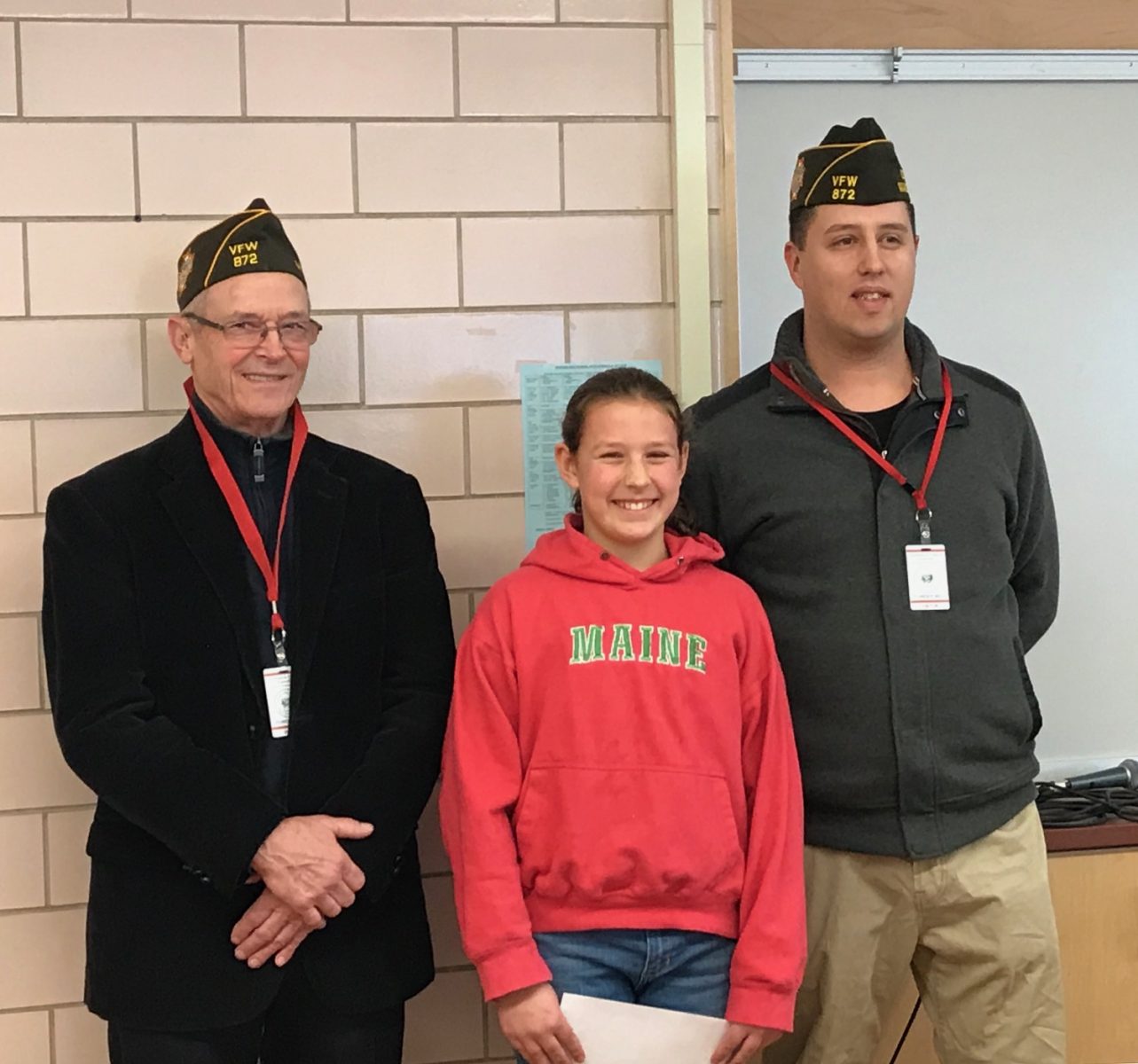 Share
Tweet
Share
Share
Email
Comments
SOUTHWICK – Representatives from Southwick VFW Post 872 handed out two separate awards in the school district on Wednesday morning.
Troy Henke and Donald Morris of Post 872, issued the Smart/Maher Teacher’s Award to Desiree Moriarty, who is a history teacher at the Southwick Regional School. Teaching Advanced Placement History, American Government, and U.S. History, Moriarty was selected as the winner by not only Post 872  but also by District 7 in Massachusetts, which consists of teachers throughout the Western Massachusetts region. 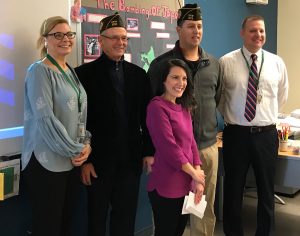 Each year, teachers in each district and state across the country send in their applications to be considered for the award.  The local VFW posts evaluate the candidates and select a winner.
Seeing Moriarty’s strong passion for teaching history and the creative ways she uses to make history exciting and relevant to her students, made an easy decision for Henke to choose Moriarty for the award.
“We were very impressed with Mrs. Moriarty,” said Henke.
Although Moriarty knew ahead of time that she had been selected, she had no idea that members of the VFW and school district officials were coming into the middle of her class to present her with the award.
“I definitely feel really honored by it,” said Moriarty. “I have a passion for this subject.”
After Moriarty was presented with the award by the VFW and posed for pictures, one of her students in the classroom, Cayleigh Ellsworth, was heard saying, “Now I feel motivated.”
In addition to receiving the award, Moriarty was also given a check in the amount of $150 from VFW Post 872 and is   invited to attend the District 7 ceremony, which will take place at the Forest Park VFW Post 7352 in Springfield on March 25. 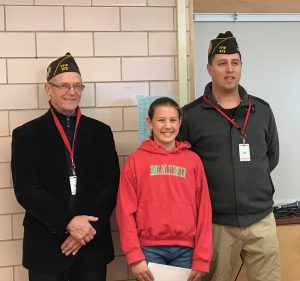 Sixth grader Maggie Cronin was the winner of the Patriots Pen essay contest for Southwick. (Photo courtesy of Greg Fitzpatrick)

The second award that Henke and Morris announced was at the Powder Mill School. A sixth grader at the school, Maggie Cronin received the Patriots Pen youth essay contest award for Southwick VFW Post 872.  Students in grades six through eight in Southwick schools had the opportunity to enter. Each student was required to write a 300 to 400-word essay, expressing their views about a patriotic theme.
Henke remarked that Cronin’s essay was both sincere and thoughtful. Superintendent of Schools Jen Willard praised the student’s accomplishment as well.
I just think it’s exciting for our (school) district,” said Willard.
VFW Post 872 also presented Cronin with a $50 check.
The Patriot Pen essay contest is nationwide, with 132,000  students in grades six through eight entering every year. The student who earns first place for the entire country is given a $5,000 prize and an all-expenses paid trip to Washington, D.C.