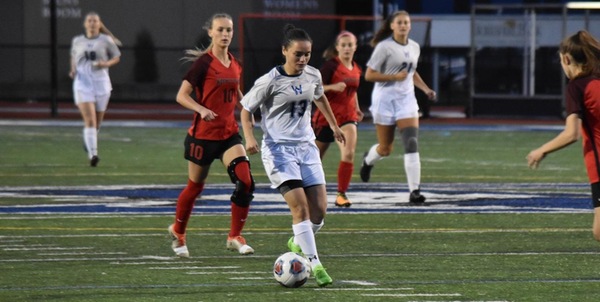 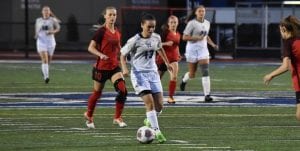 WESTFIELD – Salem State women’s soccer avenged a loss in last year’s MASCAC title game, handing defending champion Westfield State a 2-0 loss in the conference opener for both teams Saturday.
Salem State improves to 2-4 overall and 1-0 in the MASCAC, while Westfield state slips to 2-3-1, and 0-1 in the league.
Katie Brown (Milford, Mass.) had a hand in both Salem State goals, creating the first when her hard shot from the right side was stopped on a diving save by Westfield State freshman goalkeeper Lauryn Davis (Templeton, Mass./Quabbin), but the rebound trickled across the goal mouth and Taylor Capozzi (Lynn, Mass./St. Mary’s) crashed the post at the back side to bury the shot for the 1-0 Vikings lead in the 50th minute.
Brown netted an insurance goal in the 78th minute, running on to Emily Boyle’s (Manchester, NH) long serve and half-volleying the bouncing ball into the upper reaches of the Owls’ net for a 2-0 lead.
Westfield held a 23-9 advantage in total shots and a 9-1 edge in corner kicks, but the Owls were unable to capitalize on their chances.
Salem State freshman goalkeeper Lily Pfefferle (St. Paul, Minn.) drew an impromptu start, and made 11 saves, coming out to aggressively challenge multiple serves into the box late in the game.
The Owls best scoring chances came from senior Bella Eduardo (Springfield, Mass./Chicopee), who was twice robbed by the crossbar. In the first half Eduardo knocked one off the pipe from an oblique angle on the right side, then in the 47th minute after a Salem handball just outside the penalty area, Eduardo delivered a free kick that beat Pfefferle, but richocheted straight down and did not cross the goal line before it was cleared.
Westfield got three saves from Davis.
The Owls will be back on the pitch on Wednesday with a tough non-conference match up at Union College in Schenectady, N.Y. – Courtesy of Westfield State University Sports