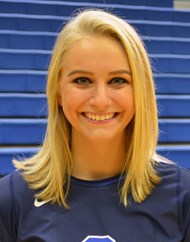 WESTFIELD – Westfield State went 1-2 on the weekend at the Tom Hay Invitational Volleyball tournament at Springfield College. Westfield State lost to the hosts on Friday night 3-0, and fell to Endicott in a tough 3-2 match, before rallying for a 3-2 win over Bard (NY) College in the final match of the weekend.
Westfield State senior hitter Jen Green (Shepherd Hill/Charlton, Mass.) was named to the All-Tournament team.
The Owls dropped the opener to Springfield, 25-9, 25-8, 25-19. Green and Paige Donahue each had five kills for the Owls.
Against Endicott Westfield won the opening set 26-24, lost the second 25-16, won the third 25-23, but dropped the final two by 25-15 and 15-8 scores. Donahue pounded out 13 kills for Westfield, while Lizzie Taylor came up with 24 digs. Brigid Murray handed out 31 assists. Green had six kills and a pair of blocks for the Owls.
Westfield used five sets to beat Bard, winning 25-15, 25-20, 16-25, 24-26, and 15-13 in the decisive fifth set. Donahue hammered 14 more kills with Brianna Starkey adding 12. Natasha Belardo led Westfield with 22 digs.
The Owls improve to 9-11 on the season with the win. Westfield will host a pair of home matches next week, hosting Worcester State in a key conference game on Tuesday at 7:00 p.m., and local rival Western New England in a non-conference match up on Thursday at 7:00 at the Woodward Center. – Courtesy of Westfield State University Sports