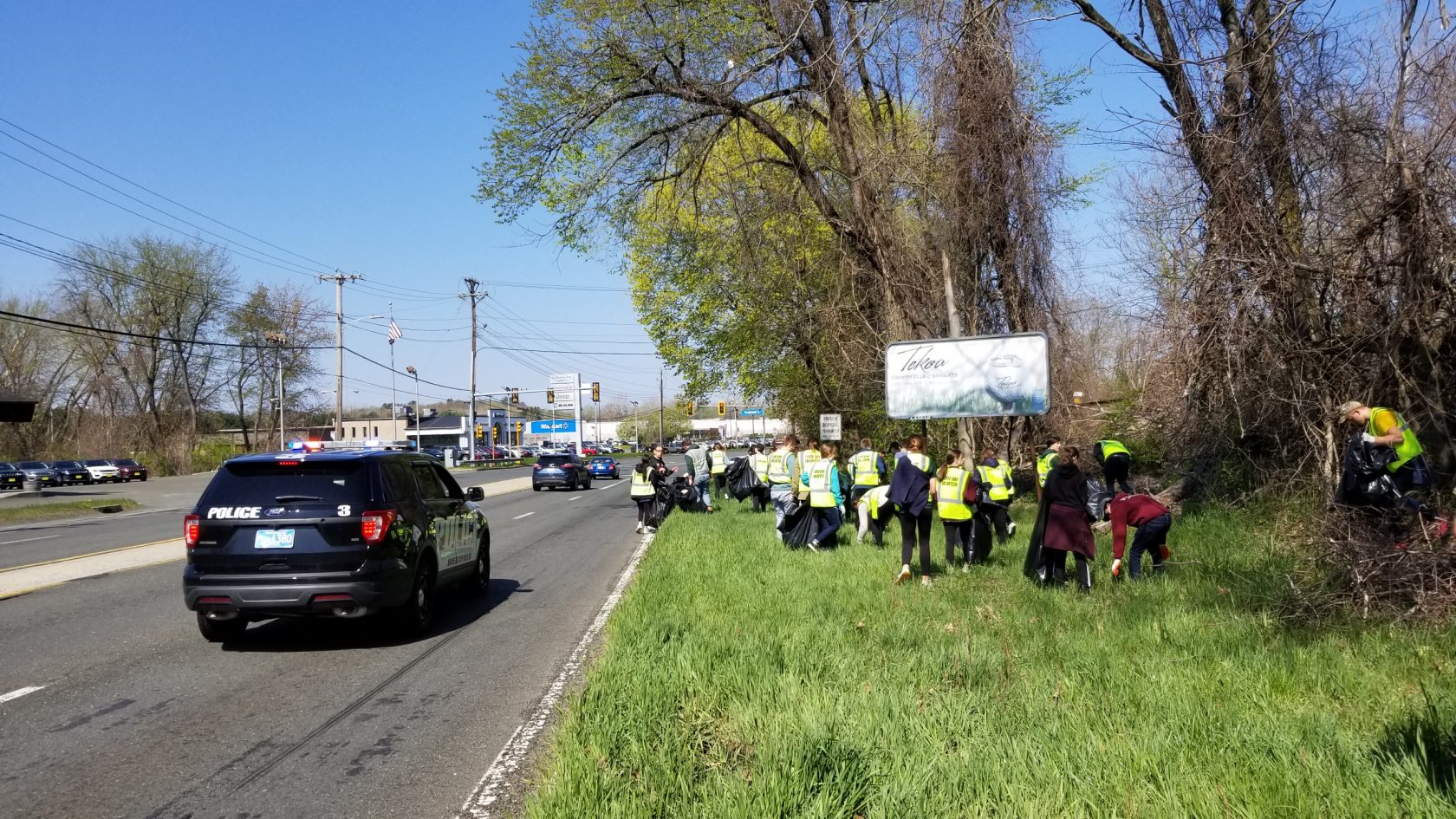 WESTFIELD-The weather was picture perfect for area residents who volunteered their time on April 24 to clean up the riverfront and roadways in the city as part of the Earth Day observation.

“Thank you to everyone who came out to help clean up our city,” said Albert Giguere Jr., chairman of the Westfield Flood Control Commission, on its official Facebook page.

Giguere added it was “awesome” to see so many families, individuals, organizations and city officials turn out to offer their assistance. 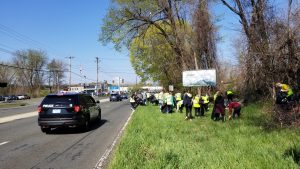 Youth group members from the Full Gospel Church in Westfield picked up trash on Route 20 as part of an Earth Day project. (MEREDITH BORENSTEIN PHOTO)

“The turnout seems to have been one of the largest, if not the largest to date,” said Giguere.

“To my understanding, there were over a dozen used hypodermic needles recovered during the entire city clean-up effort,” said Giguere. “At the Westfield River Levee, I had volunteers mark them with orange ribbon and I secured them safely in a sharps container.”

Giguere said he would personally continue efforts to remove the needles at the levee, and persons noticing needles anywhere in the city can contact the Westfield Police Department on its non-emergency line and leave a message where the needles were seen. 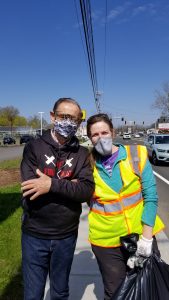 “This work is imperative as most of the litter ends up in our waterways and ultimately in our oceans where it affects water quality, all kinds of wildlife, and aesthetics,” said Borenstein.

Borenstein worked alongside a youth group from the Full Gospel Church, led by Pastor Walter Czerniejewski.

“Pastor Wally was crucial in helping and rallied almost 40 kids to help on Route 20 and on Union Street,” said Borenstein. “We gathered over 10 bags of trash along Route 20 alone, and we had to leave many cigarette butts behind as we had a police detail to try to help us stay safe along the busy road.”

The Hampton Ponds Association is also always active on Earth Day and once again thanked volunteers on its Facebook page for cleaning up the “beautiful shoreline and neighborhood.”

Another major clean-up effort included volunteers helping ArtWorks of Westfield members near the future “Westfield Is Fantastic” mural which will be painted this summer.

“It was a beautiful day to be outside at the river waterfront,” said Bill Westerlind, ArtWorks founder and president, adding that between 25 and 45 people participated in the cleanup, ranging in ages from children with their parents to seniors. 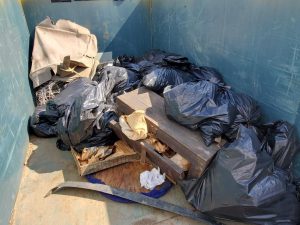 A dumpster was made available to the volunteers of ArtWorks of Westfield who worked along the flood wall near the Great River Bridges as part of an Earth Day project. (SUBMITTED PHOTO)

“Everyone was very happy with the efforts to take care of and improve the river environment,” said Westerlind. “Many of the participants were equally excited to visit the flood wall where the mural will be painted.”

Westerlind noted that everyone who participated in the mural clean up area will be personally invited to the initial mural painting session scheduled for the first Saturday in June.

“It was very exciting and encouraging to see so many people come down to the river and volunteer their time and in some cases their own supplies to clean up and protect the natural beauty of the Westfield River waterfront,” said Westerlind. “The entire area around the twin Great River Bridges offers free open park space and recreational opportunities along the river’s edge as well as a stone-dust walking path called the Westfield River Walk.”

Cheryl Crowe, an ArtWorks board member, shared a similar sentiment.

“I would like to give a big shout to all the many volunteers of all ages and to the parents accompanied by their children teaching them the importance and responsibility of taking care of our environment,” said Crowe. 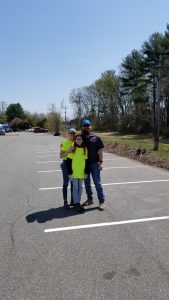 Juli L. Simons, environmental specialist with Northeast Paving, is seen with Hailey Foxe and Frank Secret who were among the crew members Simons organized to help with Earth Day clean-up efforts in Westfield. (SUBMITTED PHOTO)

Crowe also thanked Francis Cain, acting DPW director, for assisting in picking up the collected trash and allowing the use of a dumpster.

“Mr. Cain is very supportive to ArtWorks and to the community as a whole,” she said, adding that Giguere was also instrumental in helping clean up, provide gloves, trash bags, snacks, water and “his many stories.”

“It was an amazing day working together as a team,” said Crowe.

Borenstein noted by the end of the day more than two tons of trash had been collected, including two mattresses, 50 tires, five gallons of oil, and two gallons of antifreeze.