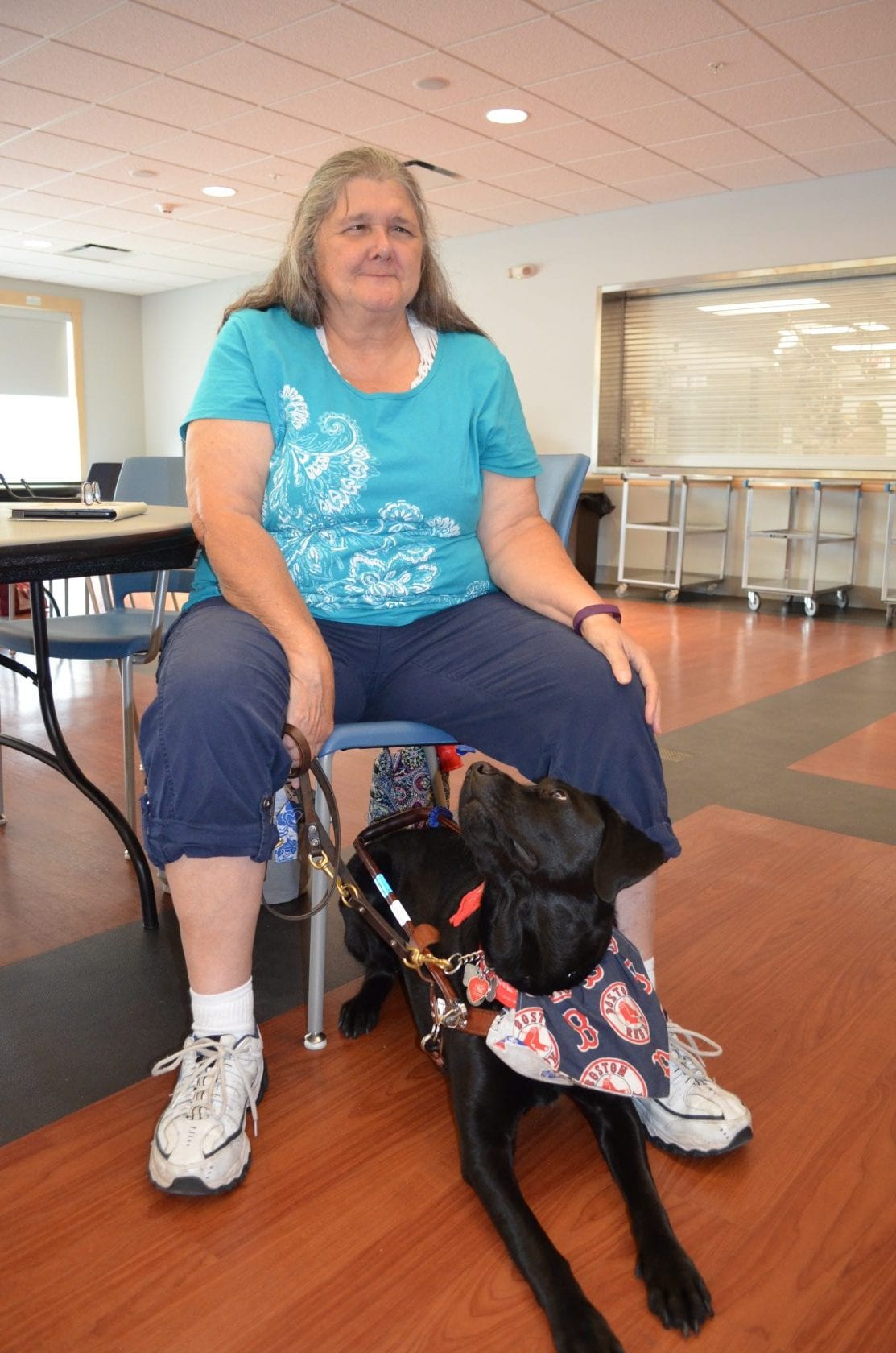 WESTFIELD-Irene Lansing is grateful for Yoshi, her guide dog, and in her quest to pay it forward, she is sponsoring a “wag-a-thon” this month to raise funds for the organization that has given her so much.

Lansing, who is legally blind, was given a “gift” by Guiding Eyes for the Blind two years ago when Yoshi became a part of her life. 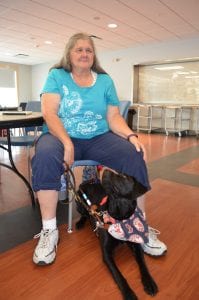 Irene Lansing has a “wag-a-thon” benefit underway to raise funds for Guiding Eyes for the Blind. She is seen with her beloved guide dog “Yoshi.”

“My goal is to raise $2,000 this month for Guiding Eyes for the Blind,” said Lansing, adding she wanted to surpass the $1,440 she raised last year during her first wag-a-thon.

Lansing, a former longtime employee of Walmart on Springfield Road, explained she has been legally blind for five years.

“I was fortunate that through the Massachusetts Commission for the Blind, they gave me information about Guiding Eyes,” said Lansing.

After Lansing was accepted into the Guiding Eyes program, she participated in mobility training over the course of three years with a trainer from the Massachusetts Commission for the Blind so she would be ready for the day she would meet her new partner. That day arrived on Feb. 8, 2017 when she met Yoshi for the first time.

“The first time I met him it was amazing,” said Lansing. “I had some special treats in my hand and when he came over, there was an instant bond and a lot of tears.”

Yoshi, a Labrador retriever, and Lansing were inseparable from that moment on. After three weeks of training at the Guiding Eyes facility in Yorktown Heights, N.Y., Lansing and Yoshi were ready to begin their life together in Westfield.

“It’s a big process,” said Lansing. “I was confident but also nervous when we were going to be by ourselves.”

Fast forward two years and most days Lansing and Yoshi stop by the Westfield Senior Center – for exercise, bingo, and lunch. Lansing also assists the kitchen staff prior to lunchtime by setting up trays and then collecting table items when lunch goers leave.

“I enjoy visiting the senior center because I like meeting different people,” said Lansing, adding senior center staff and friends have already contributed to her wag-a-thon benefit.

“I am the only one walking for the wag-a-thon,” said Lansing, noting her FitBit assists her in measuring her daily miles. “Sometimes I walk four miles, some days a mile, it depends how I feel or how the weather is.”

Lansing is confident she will surpass last year’s money raised because all of the proceeds will assist in the breeding, raising and training of dogs for people who are blind or visually impaired.

“This wag-a-thon is important to me because it costs $50,000 to train each dog,” said Lansing. “This is my way to help them because they have helped me so much.”

Lansing noted that Guiding Dogs launched the fundraising idea last year and she was “right onboard.”

Area residents interested in making a donation to Lansing’s cause this month can send her an email to [email protected] and she will follow-up with a message. For more information on Guiding Eyes, visit guidingeyes.org.

“Many of us sponsor Irene and Yoshi in their efforts to assist others who are visually impaired,” said Tina Gorman, executive director, Westfield Council on Aging. “It takes dollars for Guiding Eyes to train dogs and place them with those who will benefit from their assistance. Last year both staff and senior center participants supported Irene in her efforts to raise money for this most worthwhile cause.”

Lansing is thankful for the continued support she is receiving from city residents, whether it is for the wag-a-thon or her participation in the walks associated with the Westfield 350th birthday celebration.

“Yoshi is very calm when he’s working,” said Lansing. “He tries to get away with things but I correct him and he gets right back in line. For the past two years with Yoshi at my side, I have lost weight, built up muscle, and gained more confidence in myself.”