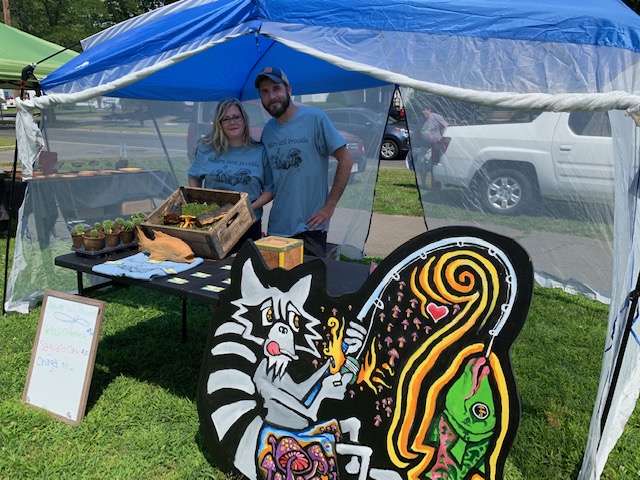 WESTFIELD-While rainy and windy weather hampered sales at the Westfield Farmers’ Market during seven weeks of its spring to fall run, organizers are still bullish on the overall impact the market had for the city.

“We had one day when the total customer count was as low as 20, and others as low as 73 and 79 for the entire day,” said Deborah Randzio, market manager. “Given those numbers, I think we did fairly well to keep our total daily average at 226, right about average. That means that the good weeks were really, really good, but it also explains why we did not experience an increase in visitors this year.” 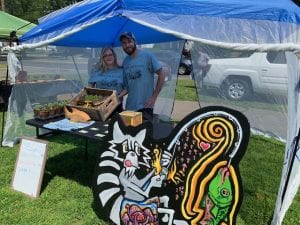 Alyssa Serrenho and Brent Puza of Nature Will Provide were new vendors at the Westfield Farmers’ Market this year. (Lori Szepelak photo)

One of the issues that members cited was the lack of signage throughout the season.

“The city enforced an ordinance and forbid our posting of signs in the tree belts and planters around the city,” said Randzio. “We received permission from the police department to put signs on the posts of some of the local street signs, but there were only a handful of those, mostly in the center of town.”

Also, while city residents were encouraged to post a farmers’ market sign on their lawn, less than eight individuals participated in the endeavor.

“We are working to find solutions to the signage problem for next year,” said Randzio. “Westfield residents are still reporting that they were not aware there was a farmers’ market in town every week all summer long.”

Randzio added that the musicians who perform at the market each week “enhance” the market experience for customers, vendors and volunteers.

“The music is partially sponsored through a grant from the Westfield Cultural Council,” said Randzio. “It enables us to pay musicians to play at the market each week the whole time it is open. The musicians are not paid what they are worth, but they play because they love being at the market.”

Overall, Randzio said the committee is pleased the market provides a community gathering space, and a “safe place to spend time for those who need it.”

In years past the committee had also hosted a winter market, however, since all of the members are volunteers, they decided to take a break since next year’s market season starts with planning efforts in January.

“Our mission is to support local agriculture and to provide healthy food to the community,” said Randzio. “Since farm production is nearly over by November, except for some root crops and baked or preserved items, the winter market had become more of a craft fair than a farmers’ market, and did not really support our mission.”

Looking ahead to next year’s season, the committee is hopeful they will be able to recruit more farms that use organic methods and sell non-GMO products.

“Since our market has among the longest hours in the state, it makes a very long day for farmers by the time they harvest, clean, and package their produce, load their trucks, drive, sometimes an hour or more to the market, spend the day there, and then pack it all up and do it over again the next day for another market,” said Randzio.

Randzio added that the farmers’ “overhead is considerable” when one considers the amount of additional employee hours and vehicles used to attend the market.

“We want to work with the farmers to make changes that make it easier for them to participate,” she said.

Randzio noted “with the change in culture and new ways of shopping,” committee members are also considering offering market goods either for pick-up or delivery next season.

“We would need a volunteer to take on that project to organize it and make it happen,” she said.

Committee members are also looking at the viability of community sponsorship partners who recognize the contributions the market makes to the Greater Westfield area.

“Although we appreciate their generosity, we understand that we cannot continue to rely on the generous donations of individuals or the Westfield Cultural Council grant to supply our financial needs,” said Randzio. “With enough help, both in hours of labor and financial, there is no limit to the ways the market can grow in serving the community.”

For more information on the farmers’ market, including ways to become involved as a volunteer, to purchase market bags, gift coins and gift certificates for future markets, or to review a list or vendors who will take individual orders, visit www.westfieldfarmersmarket.net.

“The market committee would like to thank all of our vendors, customers, and volunteers for your loyalty which made the market successful despite the weather this season, and the Episcopal Church of the Atonement for being such gracious and generous hosts,” said Randzio. “You practice what you preach – ‘All are welcome – all the time!’”