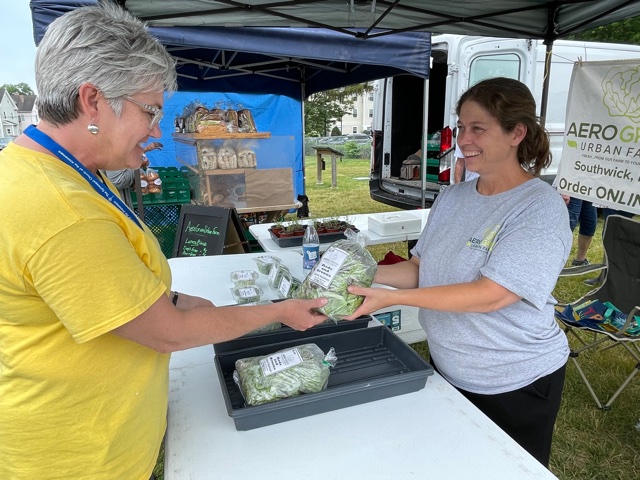 WESTFIELD – For beekeepers Peggy McKinstry and Gary Clark of Sandy Hill Apiary, they enjoy meeting customers and sharing their knowledge about beekeeping each Thursday at the Westfield Farmers’ Market.

“This is a fun hobby and we were looking to do something together in retirement,” said Clark on the afternoon of July 1 on the grounds of the Episcopal Church of the Atonement. 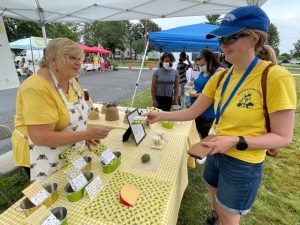 The couple has two beehives and approximately 50,000 bees on their Sandy Hill Road property.

“We will be harvesting honey next week and also hope to have a fall harvest,” said McKinstry, who along with her husband are members of the Hampden County Beekeepers Association. They are among the many volunteers who share their enthusiasm about beekeeping in the Massachusetts state building during The Big E.

McKinstry wears a yellow “Queen” bee T-shirt when she sells her products and Clark wears his “Drone” T-shirt.

“This is Peggy’s business and I’m here to support her,” he said.

Rachel Burke, a Westfield Farmers’ Market volunteer now in her second year, was eager to purchase a package of beeswax wraps from McKinstry.

“I like the beeswax wraps because I’m not using plastic, they are reusable, and they are a nice alternative to a ziplock bag,” said Burke.

Just a couple booths away was Marty Lynch of Blandford who was representing his family’s business – Meadow Burn Farm.

“My son, Brendan, and my wife, Kathleen, actually make and sell the cottage garden blooms and lavender products,” said Lynch, noting Kathleen runs the garden aspect of the business and Brendan handles the sales and tent setups at market venues. 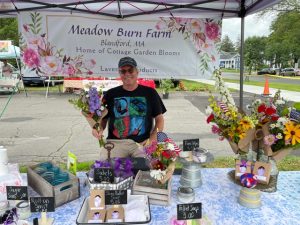 “I also work with Brendan on a separate business called Special Projects!,” said Lynch. “We are a handyman team that offers low rates and quick responses.”

“We are here every week and we are also at the Lee market on Saturdays,” said Lynch.

“This is our second year in business and our first year at the market,” said McGee, noting the response from visitors since the market opened for the season has been “fantastic.”

Renee and Tommy McGee sell “micro greens” which they say are “super foods” – high in nutrients and important for one’s immune system.

“In the next two weeks we will also be selling kale, arugula, spinach, strawberries and mushrooms,” said McGee. “The community rallies around the vendors and I am happy to be here. We feel so welcome.” 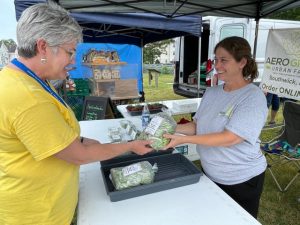 Kadomoto noted that attendance among vendors and visitors has increased each week since the market opened June 3.

“Weather is always a factor on attendance, and we had beautiful weather all four market days in June,” said Kadomoto, noting opening day saw 357 visitors, and in subsequent weeks the visitor totals were 531, 721 and 732. “We count customers on the way in and it averages out to be 585 for each weekly five-hour market.”

Vendor participation started with 14 booths on opening day and increased the following week to 15, then to 18, and then 19.

Kadomoto also stressed other features of the market include free parking, and the musical entertainment which is possible by a grant from the Westfield Cultural Council.

Another vendor offering a variety of micro greens, salad mixes, and gourmet mushrooms is Nick DiSanto of Optix.

“I will be here every week,” said DiSanto, who was offering pink and yellow oyster mushrooms and mixed greens. “The mushrooms are especially good for one’s immune system.” 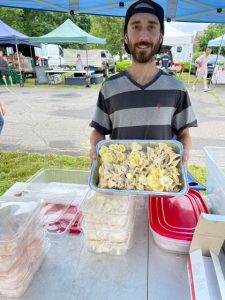 “I will be here every week and will be offering tomatoes, cucumbers and watermelon soon,” he said.

For business owners considering being a vendor there are several options including trying one week to see how the community response and experience is, according to Kadomoto.

Steven Petersen, who is visiting his daughter, Kelly Cavallo of Springfield, set up a market table next to her on July 1. Petersen is originally from Alaska and took up woodworking during retirement. Most of the wood he carves is recycled from a wood pile or recycled from friends who have donated wood to him. 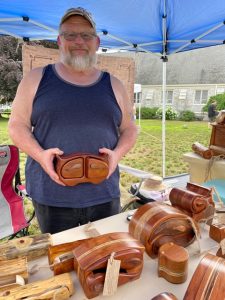 “I offer one-of-a-kind pieces and some people here have asked for specialty items to be made,” said Petersen, who was trying out the market for one day.

Cavallo, whose business is “Be Kind Anyway,” recently moved to the area from Louisiana and is looking forward to her first year of the market in the city.

“My sister-in-law works at Berkshire Bank across the street and said she goes to the market with co-workers each week,” said Cavallo, adding, “This is the one I needed to get into.” 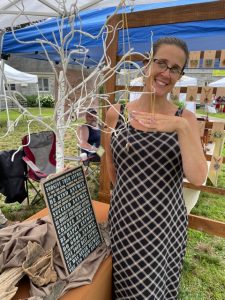 Her earrings, necklaces and bracelets feature intricate designs from flowers in her garden as well as wildflowers she sees.

“I plan to be here every week this year,” she said.

For an updated weekly schedule of vendors, as well as musicians providing entertainment, visit westfieldfarmersmarket.org.

“Some people are starting to do samples again, and visitors are also enjoying the music that is being provided,” said Kadomoto. “We are still matching SNAP up to $5 a week thanks to a generous donor.” 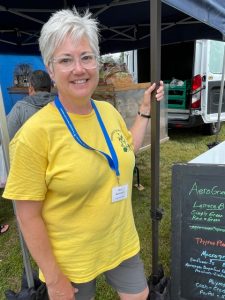 The Westfield Farmers’ Market runs through Oct. 14 on Thursdays, rain or shine.