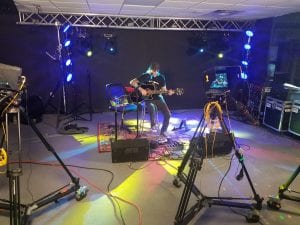 Local musicians and bands are sought for a new local music production that will be recorded in a sanitized studio with producers and musicians in isolated areas. (KEN STOMSKI PHOTO)

Conceptualized by Jay Pagluica from Gaslight Entertainment, the new series will spotlight local musical acts of all genres. Each episode will include both performances and interviews of one act — each act has its own show to be the star of.

Professional sound and lighting is engineered by Pagluica, who has been working sound and theatrical lighting since the 70’s, and the production is produced by Peter Cowles of WCPC-15. Each episode will be shown on the local community programming channel, the WCPC-15 Youtube page, shared to social media, and are available for sharing to other community cable access facilities.

Once an act has scheduled a time slot, they will be able to set up as they like and perform a sound check. Five to six selections will be recorded as one full set, and then Pagluica will interview them. During post-production, Cowles will put it all together “old school” music show style, with bits of the interview placed between songs. Acts are free to use any of the footage they want, and with the sound and lighting being in a controlled environment, acts will end up with a decent video to use for promotion. 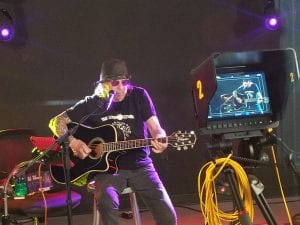 Local musicians and bands are sought for a new local music production to be aired on Westfield’s Community Programming Channel. (KEN STOMSKI PHOTO)

When asked if WCPC-15 is doing this during the COVID-19 crisis, “Yes!” said Cowles, “We take the safety of ourselves and others very seriously. Jay and myself are in isolated rooms, there is one camera operator in the studio, and everything is sterilized with a commercial product after anyone is inside of the studio.” Pagluica adds, “although we plan on having this as a continuing series, the intent right now is to provide another way for artists and musicians to share performances with people who are sheltering.”

Interested musicians or acts are encouraged to reach out to executive producer Peter Cowles via email at [email protected] Acts may also reach out to associate producer Ken Stomski via Facebook messenger.