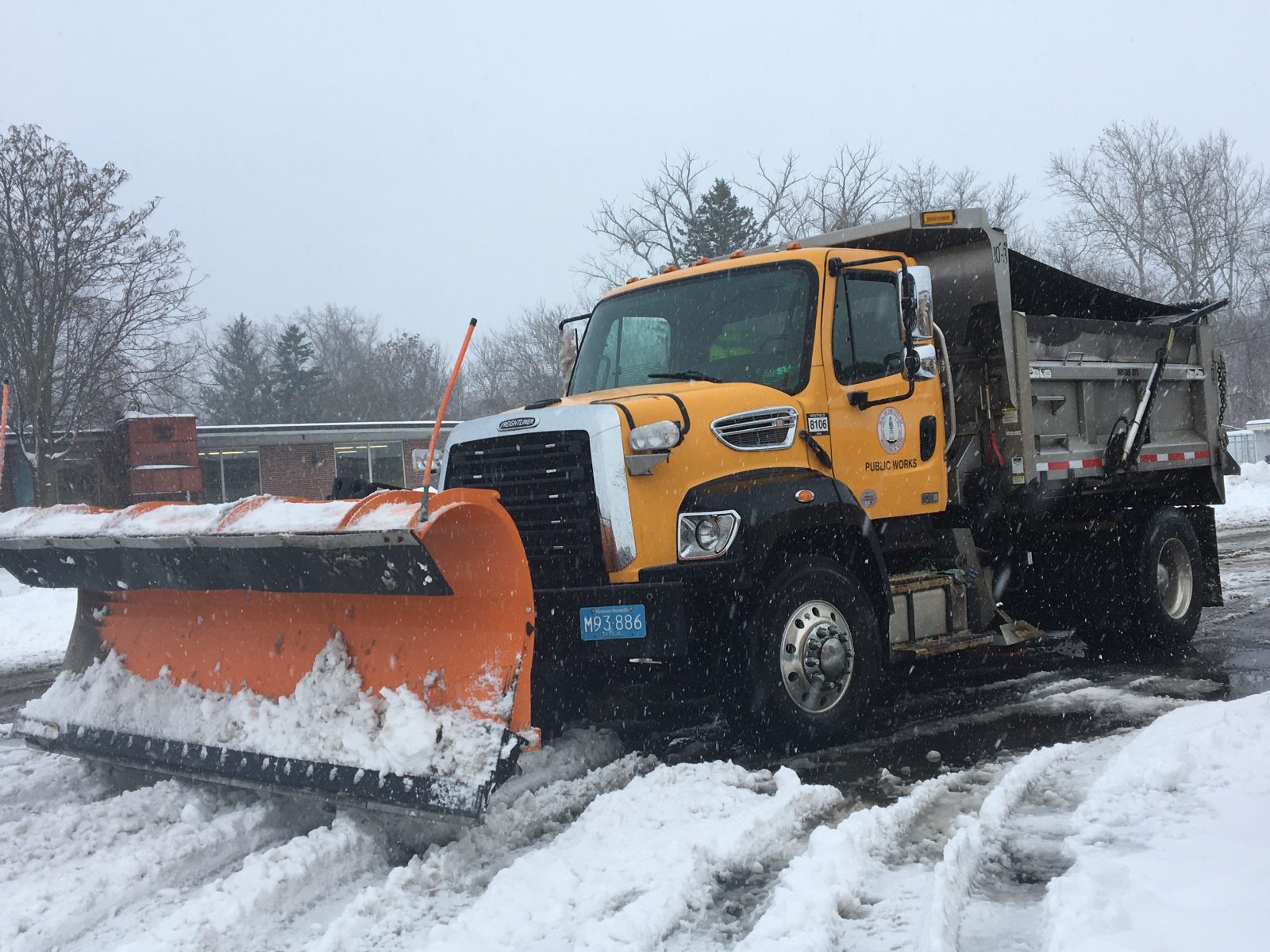 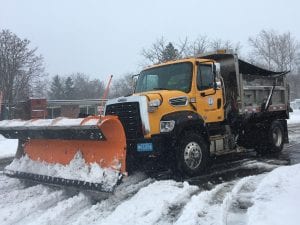 WESTFIELD – Public Works Deputy Superintendent Casey Berube discussed not one, but two rounds of snow cleanup with The Westfield News following the first storm of the season that began Dec. 1.

Berube said he had people working around the clock since the storm began, which by Monday had accumulated nine inches. “At this point, we’re managing it,” he said.

By Tuesday morning, an additional eight inches fell across the city.
Berube said when it snows,  the city typically uitilizes 15-20 pieces of equipment,; but a nine-inch snowstorm is more than they can handle by themselves, and contractors are called in to plow the side streets. The department has a total of 50 contractors they call on. With 38 different plow routes, they try to put two plows on each route, and even with all the contractors and all their own trucks, they’re a little short, he said. 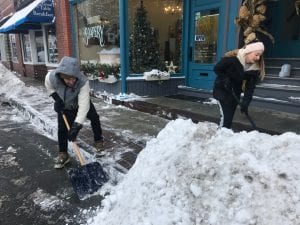 Joe and Amanda Caracciolo, owners of Budsuds Soapery on School Street, clear snow from the sidewalk in front of their store Dec. 3. (Photo by Hope E. Tremblay)

The highway crew also pulls from other public works divisions, such as Water Resources and Sewer, because they have to clear the city facilities and parking lots, in addition to the roads.
The plan for Monday night was originally to put out a skeleton crew, four trucks to spread material, and send the rest of the crew home for a rest period after working for 20 hours straight, before everyone came back early to start in the morning. He said there was a good chance they would be bringing in contractors again overnight on Monday.

“We have to be mindful of how we exhaust our labor force, to avoid burnout. The guys have been working really hard,” he said.
That plan changed as the temperature dropped and another eight inches fell Monday night, with more snow in the higher elevations. On Tuesday morning, Berube said they sent more trucks out overnight and more contractors were called in.
Berube said the storm was challenging, because it was right on the heels of a holiday and was the first one of the season, with some of the equipment being brought out for the first time. He also commented on the long duration of the storm, which he called “relentless.” In their favor was the temperature, which was relatively mild.
On Tuesday morning, Berube said having school called off helps, because the drivers don’t have to worry about buses getting stuck, or children standing at bus stops. He said the crews would be out all day, and then back out on Wednesday to finish the cleanup. The parking ban will still be in effect until all the side streets are done, he said.

“We’re responding the best we can with the resources we’ve got,” Berube said, adding that he would like to ask the residents to be patient. He said he knows they get upset when the plows go by, and the snow/slush ends up on driveways, partly because he’d been getting plenty of calls, and expected them to continue all day.
“The guys have been out there 24/7. Every one of the workers deserves a pat on the back for sticking this one out,” Berube said.