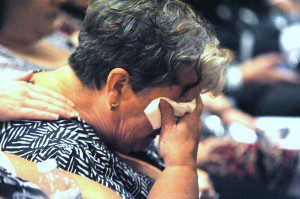 WESTFIELD – Mourners remembered fallen Westfield Police Officer Jose Torres as a family man who was the life of the party.
“He truly lived life to the fullest each and every day,” said his widow Kara Torres during a funeral service held this morning at Westfield State University.
Torres, 53, was killed last Thursday while working a traffic detail on Pontoosic Road. He was accidentally run over by a dump truck while directing traffic and ensuring the safety of others.
Thousands of police officers from around the state, as well as hundreds of community members, gathered to pay their respects today. Gov. Deval Patrick, Congressman Richard Neal, Secretary of Energy and Environmental Affairs Richard K. Sullivan, Hampden County Sheriff Michael Ashe and Mayor Daniel M. Knapik were among those in attendance.
Kara said her husband was her best friend and the love of her life.
“We went together like peanut butter and jelly,” she said.
She spoke about the person he was as a husband, father, police officer and friend, and said people knew him as Officer Torres, Mr. Torres, Coach, and even Jos-B.
“Everyone he met became his friend,” she said.
Torres’ cousin Hilda Colon said Torres was well-respected by all because he respected everyone.
“It did not matter who you were, where you were from, if you were a good person or bad person, you were a person, and that’s how he treated you,” she said. ‘That’s why there is this outpouring. It says something about a person that even people he arrested are showing up to pay their respects.”
Colon said she grew up with Torres and numerous cousins and said, surprisingly, he was not so outgoing back then.
“He was a very quiet kid,” she said. “As he got older, he was well-behaved when he needed to be, and when he was with his friends and cousins he was himself.”
Colon said she will miss his laugh the most.
“When I heard of his death, the first thing I thought of was his laugh,” said Colon. “He had this way of coming into a room and announcing himself with a ‘Hey, hey’.” 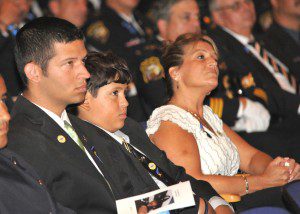 Kara Torres, wife of the late Jose Torres, sits with her two sons, Jay and Christopher, during a memorial service for her late husband yesterday. (Photo by chief photographer Frederick Gore)

Kara described Torres as “perfect” and said every day began the same way – “he greeted me with a kiss and hug followed by the words ‘I love you’,” she said.
Her many years of memories include their sons Jay and Christopher, who meant everything to Torres.
“As a father, he was there supporting our two sons,” said Kara, noting that Torres was on the sidelines for Christopher’s baseball games when he wasn’t coaching, and he was at every opening and closing night of Jay’s plays.
“He told everyone Jay’s acting talent came from him,” she joked.
Torres was an avid follower of the Red Sox, evident in the slideshow created by Jay featuring numerous photos of Torres in various Red Sox gear.
Kara said Jose was the life of the party and spent his time making sure everyone had a drink in their hand.
“He made sure music was playing and his hips were shaking and there was a cooler by his side,” she said.
Torres’ childhood friend and fellow police officer, Capt. Hipolito Nunez, recalled growing up with Torres and how his dance moves were taught to him by “the best – his mother.”
“His devotion to his family began in a red house on Montgomery Street,” said Nunez. “His family extended beyond blood.”
Nunez and Torres spent their days playing in Torres’ backyard or at the Boys and Girls Club or at Whitney Park where Nunez said Torres found the best hiding spots while playing Capture the Flag. However, looking back on more than 40 years of friendship, Nunez said there was one thing that stood out among all others – “the love he had for his wife and sons.”
“Those two loved each other very deeply,” said Nunez. “It’s a love that transcends the physical.”
Nunez said Torres lived by the motto “Live, Love, Laugh” every day.
“Young and old related to Jose,” he said.
Nunez spoke about Torres’ sense of humor, noting that last year he went Christmas caroling to the police chief’s home at 2 a.m.
“Truthfully, his jokes were not that funny, but he always made you laugh,” he said.
Torres had “a heart for all – man or dog” said Nunez, who told the crowd about the time Torres found a dog, took him home, and named him Champ.
“After a few days, the dog’s owner found him and when the owner called the dog, Champ kept going to Jose,” he said. “After a few times, the owner gave up and gave the dog to Jose.”
Nunez said in addition to his wife and sons, Torres was proud of his larger family, especially his mother, whom Kara said he visited nearly every morning before heading off to work. 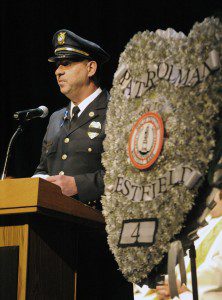 Westfield Police Sgt. Alex Baginski spoke during the service and he will miss his friend, who made work fun.
“It was a good day when you worked with Jose,” said Baginski.  Hampden County District Attorney Mark Mastroianni, a Westfield resident, said he knew Torres by reputation, and it was a good one.
“He was such an outstanding man and fantastic police officer,” Mastroianni said. “Everyone said when you worked with him it was a good day – his reputation was everywhere.”
Mayor Knapik was visibly shaken while speaking about Torres.
“Jose touched so many people,”  he said. “He had a big heart, a great smile, incredible kindness, heroism and pride in his family. It is said a person is judged by their character and kindness, and in that, Jose was the best.”
He spoke about Torres’ dedication to the community through his police work, for which he was recognized several times.
“Jose’s spirit will be forever on patrol on our streets,” Knapik said.
Citizens lined the streets as the funeral process traveled from Firtion-Adams Funeral Home past the Westfield Police station and up Court Street and Western Avenue to Westfield State. With hands over their hearts, people paid their respect, wiped away tears, and remembered Torres for the little ways he touched their lives.
“He was a hell of a nice guy,” said Allen Blohm Sr.  “I would go to the S&S Mart, and he’d go in there to play his numbers hoping to hit it big. I’d be in there checking tickets, and he’d give me two bucks for a coffee. He was a nice all-around guy. I’m gonna miss him. I’m gonna miss him very dearly. I feel sorry for his wife and kids, and I wish them the best.”
Kara said just a few weeks ago, she, Torres and Christopher were at the Burger King drive-thru when he ordered an extra hamburger.
“I just thought he was really hungry,” said Kara.
Then, after leaving the restaurant, they pulled up next to a homeless man sitting on the ground. Torres addressed him by name and offered him dinner.
“He said ‘Thank you, Jose’,” said Kara.
Colon said Torres always thought of others and often brought water, juice and donuts to construction workers when he was assigned a traffic detail.
“He used to come in (to the Dollar Tree store) and buy Gatorade and soda and stuff. He was a nice guy. He was very happy and always smiling. He always had a quick joke, like if you were upset he knew how to cheer you up. It’s a shame he’s gone,” said Matt Kielbania, Dollar Tree store clerk.
Torres was remembered by the families of his fellow brothers and sisters in blue.
“One of the greatest officers there was,” said  Judith Bard, aunt of Officer Kevin Bard. “He was never mean or nasty or anything. He did his job. If you did something wrong you got the ticket, but he was never mean or nasty or arrogant or anything. He just had a smile on his face at all times. I worked with him at the polls. Sometimes he worked the polls and I worked the polls, and the whole day he was just nice. Nothing ever got under his skin. He was a great, great guy. I’ll miss him.”
Barbara Dalton, wife of retired Westfield Police Officer Dennis Dalton, said she felt for the Torres family.
“I can’t imagine what they’re going through,” she sad. “You never know when they leave in the morning what they’re going to experience.”
The funeral service was co-celebrated by Fr. Brian McGrath, pastor of St. Mary Parish, Most Rev. Timothy McDonnell, Bishop of Springfield, State Police Chaplain Fr. William Hamilton, and St. Mary Associate Pastor Ryan Rooney. Altar servers included Drew Collins, Reid Hannan, and Matthew and Jack Masciadrelli, all of whom were affiliated with Torres through St. Mary’s and youth sports. 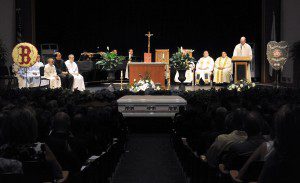 McGrath spoke about Torres’ commitment to his family.
“When you want to talk about a family man, you talk about Jose,” said McGrath.
The Massachusetts Senate, during formal session last night, adjourned in memory of Officer Jose Torres at the request of Sen. Michael R. Knapik.
Following funeral services, Torres was laid to rest at Pine Hill Cemetery where his Red Sox themed casket was lowered into his grave marked by a stone with pictures of Torres and his family. During the graveside cemetery, Torres was honored with a fly-by and a “lastcall” from Westfield Police dispatch.