WESTFIELD – The offseason for Westfield Babe Ruth Baseball typically involves rest and relaxation. Not going to happen this year.
With the World Series of Babe Ruth Baseball 14-Year-Olds expected to take over the Whip City some 360-odd days away, there is much to be done between now and then.

“Our top priority this offseason will be to develop a ‘true’ ace,” Westfield 13-Year-Old All-Stars manager Matt Avery said, moments after his team was bounced from the eastern regional semifinals.
Building a stronger contender is just one aspect of the puzzle that Westfield Babe Ruth will attempt to piece together over the next 12 months.
Renovations in and around Bullens Field are set to begin.
The upgrades and improvements will include: the relocation of exterior fencing, a new handicap accessible ramp, safety nets, additions to the backstop area, reinforcement to the concrete bleachers and the installation of additional seating, and new LED lights extending all the way into and around the football field.
“All of these improvements will not only support our World Series venture, but are good for all of the (city’s) teams – St. Mary, (Westfield) Voke, (Westfield) High School – and the good of the community for the next 25-30 years.” 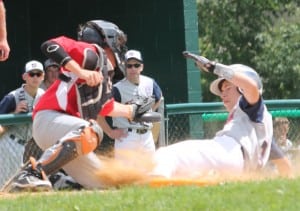 Matt Pelletier slides in safely for the Babe Ruth Baseball 13-Year-Old All-Stars in opening round play of the 2015 New England Regionals. Westfield bowed out of the Babe Ruth regionals recently, but will begin preparations for next year’s home World Series soon.

Westfield Babe Ruth Baseball, Inc., will officially enter into an agreement with Babe Ruth Baseball headquarters to host the 2016 World Series Sept. 3. A few days, thereafter, the local Babe Ruth league plans to launch its new website at WestfieldWorldSeries.com.
Fundraising efforts have already netted close to $120,000 – MassMutual just recently committed some $15,000 – and the league is just $30,000 or so away from its goal to help fund the World Series, and everything that comes with it.
“The World Series is like a regional on steroids,” Welch said. “There are more games, more teams, and more people in attendance. It will be a great community event.”
Westfield Babe Ruth has been working, or plans to work, in conjunction with Community Development, Westfield on Weekends, various other city officials, business and community leaders, and volunteers to make this a World Series to remember.
“It’s once in a lifetime,” Welch said. “We want to make it that way for the kids coming here next year.”
The 2016 Babe Ruth Baseball World Series will be held Aug. 11-18, 2016. Festivities will be planned for the days leading up to the first pitch.