WESTFIELD – A city man may have found breaking into a liquor store harder than breaking into a residence but, perseverance is rewarded and the man was probably able to drink most of the beer he allegedly stole before he was arrested.
City police responded to an alarm at Molt’s Discount Liquors received at 2:51 a.m. Dec. 10, 2012, and found that a security gate covering the door of the store had been bent up enough to allow access to the glass door which had been broken, apparently to gain access to the store.
A subsequent review of the store’s security video shows a man breaking his way into the store and emerging with a case of beer.
Later, store employees reported that a 30-pack of Milwaukee’s Best beer had been stolen.
The video also shows that, before he attempted the security gate, the suspect had tried to break in through a door at the store’s redemption area. The suspect is seen on the video running at full speed to ram the door with his shoulder.
Although he succeeded in damaging the door, no entry was gained and the suspect directed his attention to the main door.
Det. Todd Edwards reports that, a few days later while investigating an unrelated crime, he observed that the suspect seen on the video he was reviewing appeared to be the same person who had been seen on the Molt’s video.
When Edward’s suspect was identified as Nathan Bagley, 29, of 96 City View Road and formerly of 514 Southwick Road, Edwards interviewed the man and asked him about the events at Molt’s.
Bagley admitted to Edwards that he had broken into the store.
Edwards said that Bagley had apparently been drinking with friends and, when they ran out of alcohol, did not want to stop. But the liquor stores were closed.
Bagley apparently rose to the occasion and managed to get more beer anyway.
Bagley may have been well suited for the beer run as he apparently has experience dealing with locked doors.
He has admitted to breaking into at least three residences in Westfield and Agawam and is believed to be responsible for others.
Bagley came to the attention of city police in July when, together with another man named Nathan, he sold jewelry to an Elm Street merchant.
Det. Anthony Tsatsos, while investigating a theft from a Ponders Hollow Road residence, found some of the stolen items in the store and, when Bagley and the other man, Nathan King, 35, of 514 Southwick Road, returned to the store a few days later with more jewelry to sell, police were ready.
The two Nathans were interviewed by Det. Lt. David Ragazzini who reports the duo admitted responsibility for at least three house breaks in Westfield and Agawam but denied any larcenies in Southwick.
Ragazzini reports that he was told that Bagley would enter the target house while King, his driver and lookout, waited from him to return with loot which they sold and then split the proceeds.
A considerable amount of apparently stolen jewelry which the pair had attempted to sell was seized.
Not all of the recovered jewelry has been identified but a Southwick resident has claimed some items and the jewelry seized is believed to be related to ongoing investigations by Westfield, Southwick and Agawam police.
Tsatsos said that residents who have suffered losses due to thefts, especially between July 15-21, may recognize some of their items among the pieces seized by police.
Bagley has been arraigned on charges including breaking and entering in the nighttime with intent to commit a felony, larceny for a building, larceny of property valued more than $250, larceny of property valued less than $250, vandalizing property, receiving stolen property valued more than $250 and conspiracy.
Released on personal surety after his arraignment on the first of the charges brought against him, he was held in lieu of $1,000 cash bail after arraignment on the charges resulting from the break in at the liquor store and his previous conditions of release were revoked and he has been held without right to bail.
He will be returned to court on Feb. 28.
King, charged with receiving stolen property valued more than $250 and conspiracy, was released on his personal recognizance and will next appear in court on March 13. 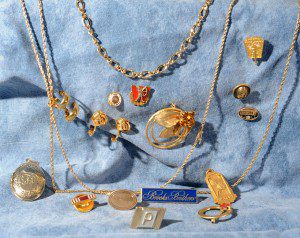 Jewelry (above) was surrendered by suspects believed to have broken into area houses between July 15-21 and residents who recognize any of their pieces are urged to contact the Detective Bureau of the Westfield Police Department at 572 6400. (Photo by Carl E. Hartdegen) 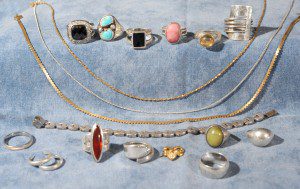 Jewelry (above) was surrendered by suspects believed to have broken into area houses and residents who recognize any of their pieces are urged to contact the Detective Bureau of the Westfield Police Department at 572 6400. (Photo by Carl E. Hartdegen) 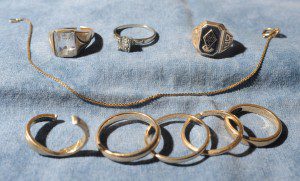 Rings surrendered by suspects arraigned for stealing from houses include gold bands with inscriptions such as “Love always and forever Scott”, “10-24-53″ and”Love M.L.F. P.R.V”. (Photo by Carl E. Hartdegen)