WESTFIELD – Yesterday, the city lost the man who was arguably Westfield’s greatest philanthropist and supporter of children when Albert F. Ferst passed away.
Ferst, 92, died yesterday morning at Reed’s Landing in Springfield. He and his wife Amelia “Millie” (Kousch) Ferst were two of Westfield’s best known citizens, known for all their contributions to the city, and especially to its children. After Millie died in 1997, Ferst continued what they had started in her name.
Ferst is remembered for his commitment to the city and its future.
“It’s a sad day in Westfield,” said former mayor Richard K. Sullivan, Jr. “It goes without saying he and Millie redefined philanthropy in Westfield. Al often quoted Millie and said ‘whatever we can do for the kids of Westfield, we should do.’ They touched generations.”
Ferst was a Westfield native who graduated from Westfield High School in 1937. He was an Army Veteran of WWII, serving in the Pacific Theater. He retired as president of Camfour, Inc. in 1998. Sullivan said Ferst was a religious man and he often said God had blessed him.
“Al used to talk about the wonderful life he had been given, and that included giving back,” said Sullivan. “He did that every day of his life.”
The Fersts’ gifts to the city include the Amelia Park Ice Arena and Skateboard Complex, Amelia Gardens, Westfield Boys and Girls Club Building Fund, the Greater Westfield Homeless Building, Westfield State Interfaith Center, several rooms at Noble Hospital, matching funds for the Westfield Children’s Museum, the Japanese Gardens at Stanley Park, and purchase of land at the Westfield Sportsman’s Club.
Sullivan said Ferst always had time to talk to a child and was known for giving gifts to Westfield’s youth.
“Al just really enjoyed people,” said Sullivan. “Lisa and I would take him to dinner and he would hold court. He appreciated his friends and family, and he appreciated the life he’d been given.”
Sullivan was also appreciative of Ferst.
“I was fortunate to call him a friend, but Westfield was fortunate to be the beneficiary of his philanthropy,” said Sullivan.
Ferst is remembered for his generosity, not only in the large ways, such as the buildings he built and trusts he established, but in the little ways. Almost every child in Westfield in the past 20 years can tell a story about Ferst and how he gave them a silver dollar or a Beanie Baby.
Katherine Kalill, 12, remembers Ferst as one of “the most kind and generous persons in the world.”
“He raised me up to be more than I could be,” said Kalill. “He always warmed the hearts of his surroundings. He was a beautiful person.”
Kalill said she loved Ferst.
“It is hard to think about life without Mr. Ferst,” she said. “but, I am happy to know that he is in peace and got everything he ever wanted – to be with his wife. I will always remember him and keep him in my heart. I will remember his happy smile and loving embrace.”
The night before Ferst died, members of Daisy Girl Scout Troop 11405 visited him at Reed’s Landing to sing Christmas Carols.
Troop co-leaders Sarah Corbett and Shannon White said the visit was planned months in advance.
“The girls asked specifically to visit Mr. Ferst,” said Corbett. “The girls thanked him for all he has done, sang songs, and visited with him and other residents.”
Corbett said she was shocked to hear he passed the next morning.
“It’s unbelievable,” she said. “He looked like he was in good health. He was in good spirits and complimented the girls on their dresses and their singing.”
Corbett said Ferst’s daughter and granddaughter were there and after hearing of his death, Corbett said it was even more special that they were able to see him and thank him one more time.
“It gives me chills when I think about the timing of it,” said Corbett. “He will be missed for sure. His altruism reaches far and wide. He left a legacy.”
One of those legacies is the Children’s Museum. Executive Director Karen Rubin said while she did not know Ferst very well personally, he is ever-present at the museum.
“He’s done a lot for the children of Westfield,” said Rubin. “He was a remarkable man, to have this vision and help create this museum.  I’m happy to be a part of.”
Another recipient of the Ferst’s generosity was Stanley Park. Park Managing Director Robert C McKean called Ferst a “kind and generous person.”
“This is a loss to the community and we are better off in this community because of Al Ferst,” said McKean. “He will be missed.”
Ferst also made generous donations to Noble Hospital, which provided the following statement:
“We sadly mourn the loss of our dear friend, Mr. Ferst. His generosity, commitment and support to Noble Hospital and our community will be forever appreciated. He touched the lives of so many in need and truly cared for and loved all children. To quote his favorite saying, ‘it’s for the children.’ His philanthropic ways were an inspiration to all.”
Mayor Daniel Knapik agreed.
“Al became like everybody’s grandfather,” Knapik said. “It’s sad that future generations will not see Al at the arena greeting children, handing out silver dollars or giving scholarships.”
The funeral will be Sunday, Dec. 18, 2011 at 2 p.m. in St. John’s Lutheran Church, 60 Broad St. with burial in St. John’s Cemetery in Westfield, which will be private. Calling hours are omitted. In lieu of flowers, donations in his memory may be made to the Albert and Amelia Ferst Charitable Foundation c/o Berkshire Bank, 31 Court St. Westfield, MA 01085 or the Amelia Park Ice Arena, 21 South Broad St. Westfield, MA 01085. 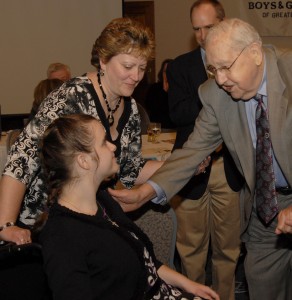 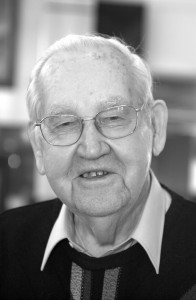 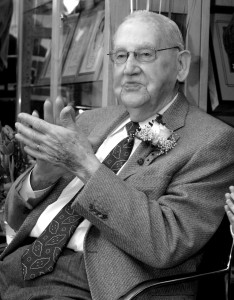 Al Ferst expresses his appreciation during one of the many free concerts at the Amelia Park Ice Arena. (Photo by chief photographer Frederick Gore)