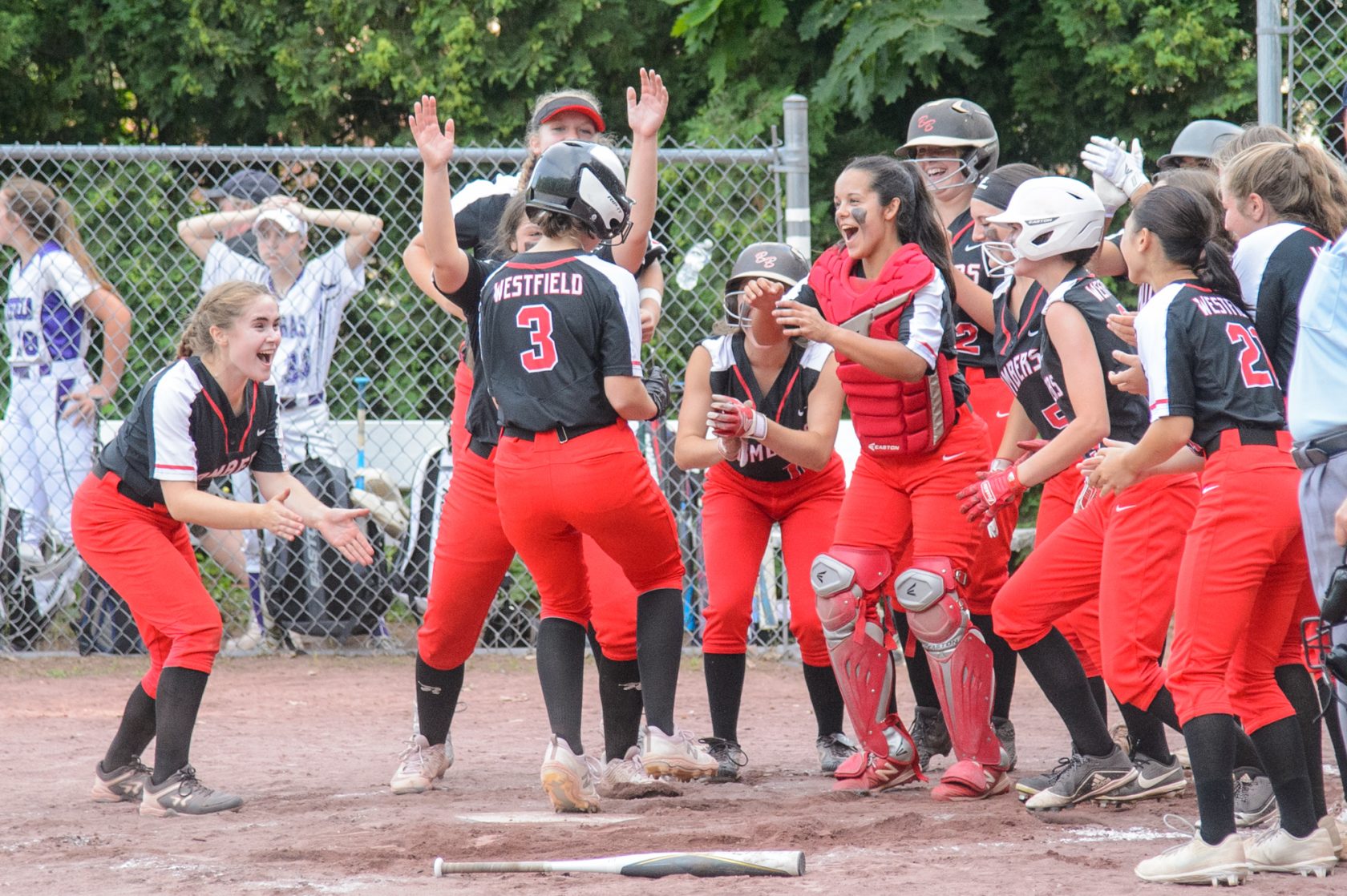 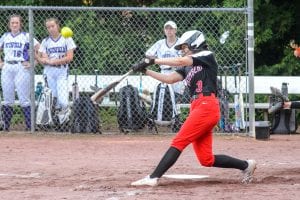 With two players on base, Westfield’s Allison Rehor (3) puts a charge into the ball and launches it over the left field fence for a three-run homer. (BILL DEREN PHOTO)

UPDATED 6/26
WESTFIELD – Westfield High School senior softball pitcher Erin Gour missed out on her junior season due to the pandemic so it really should come as no surprise that a win in the West Division 1 softball championship would not come easy.
Gour overcame a late home run barrage from Pittsfield as No. 3 Westfield held off the fourth-seeded Generals 14-10 in the West D1 title game Friday night at Westfield High School.
“We were put under pressure,” Gour said, “but we just did our thing and came back.”
Pittsfield (10-5) led early, scoring two runs in the top of the first inning. Mia Arponte and Mia Potash hit consecutive one-out singles to get things started. Mia Alfonso smacked a run-scoring single to left center field. A wild pitch made it 2-0.
The lead was short-lived. 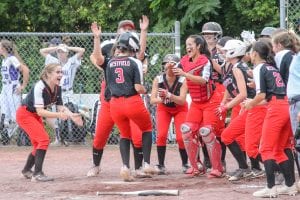 Westfield’s bats came alive in the third inning. Moija Premny hit a loud single to deep center field. Ava Cichonski walked. Allie Rehor followed with a booming three-run home run to left center field.
“I was just trying to keep my cool because I had two strikes on me and try to push through this anxiety to maybe get a run in,” Rehor said, “but it ended up being three runs.”
Westfield (12-3) was not yet finished in the inning. Tristan Macznik singled with one out and advanced a base when the outfielder misplayed the ball. An infield error made it 4-2. Carly James and Emma Lapoint singled to load the bases. Gour drove in a run with a single up the middle. With two outs, Cichonski knocked in a run with a single through the left side. A wild pitch resulted in the Bombers seizing a 7-2 advantage.
“Allie got it going with that first home run,” Gour said. “That definitely got things kicking.”
Pittsfield recaptured two runs in the third. Arponte and Potash singled to begin the inning. An Alfonso walk loaded the bases. Allyssa Mercier hit a sac-fly RBI. With two outs, Abby Lumus and Sophia Santos drew back-to-back walks, the latter of which forced in a run.
Westfield countered with four more runs in the bottom half of the third. Marlow Murphy led off the inning with a double, advanced on a wild pitch, and scored on a bunt single from Cici Toporowski. A fielder’s choice resulted in the team’s ninth run. Lapoint singled. Gour followed with a RBI double to right center field. The Bombers led 10-4.
In the fifth inning, Westfield blew the game wide open. Toporowski and James singled. Lapoint hit a RBI single. Gour belted a two-run single to left field. With two outs, Rehor hit a run-scoring double to left field. The Bombers led 14-4.
Pittsfield did not go quietly. Over the last two innings, the Generals clubbed four home runs – – two from Alfonso and one each from Potash (a two-run dinger) and Mercier – – but it was not enough. 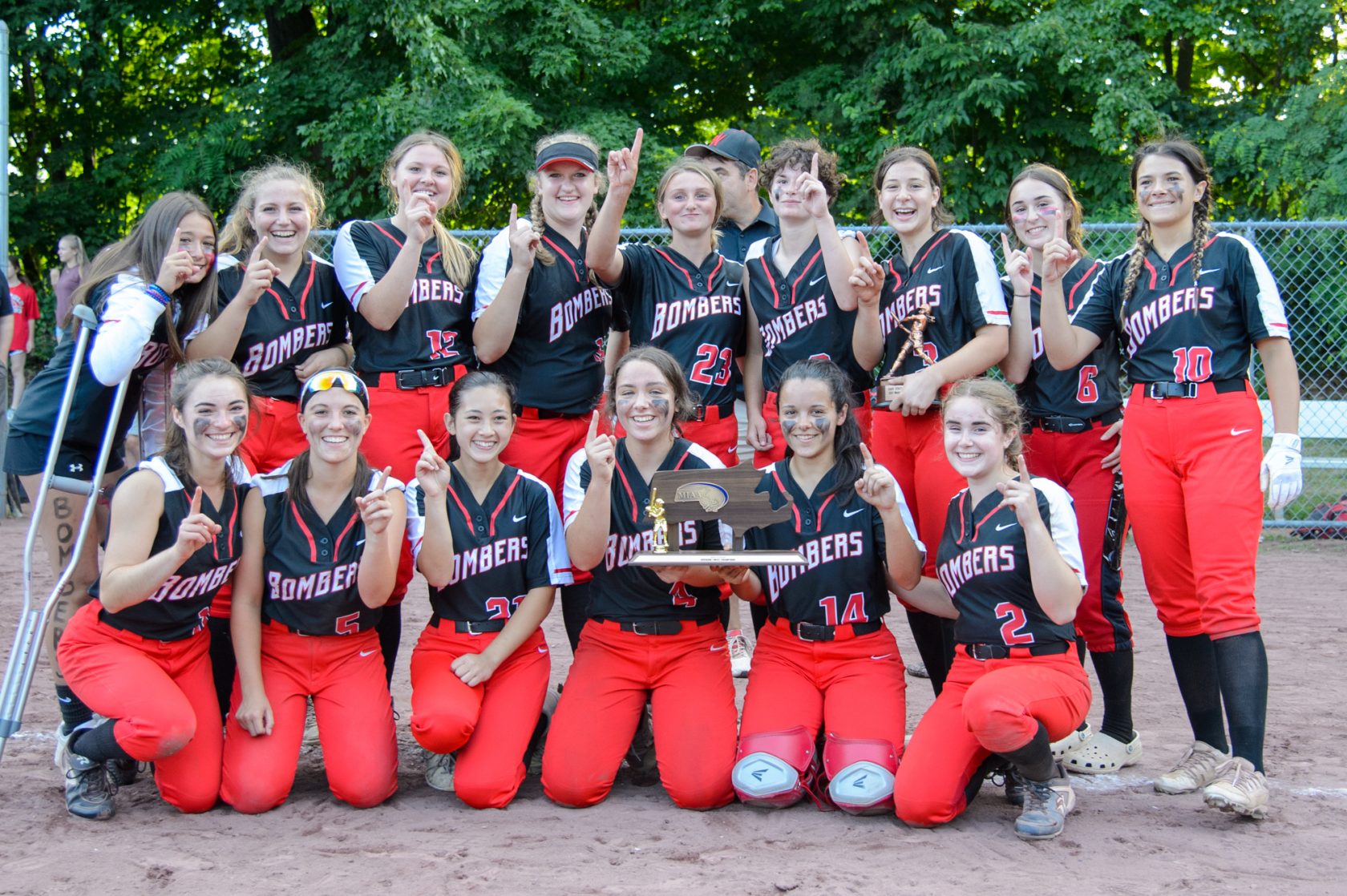