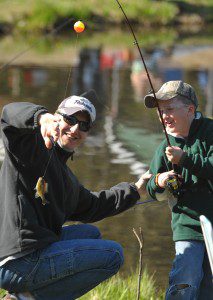 A father and son enjoy a day of fishing at the Westfield Sportsmen’s Club. (File photo)

WESTFIELD- The Westfield Sportsman’s Club will have a new president next month after current President Ray Frappier decided not to run for the position again.

Erin Harris will take over for Frappier on Oct. 21 after she was voted into the position earlier this week. Harris is currently a trustee on the Sportsman’s Club board and has been in that position for several years. She has been involved with the Westfield Sportsman’s Club for eight years.

The role of the president at the Sportsman’s Club is mostly to be in charge of the day-to-day operations of the club and make sure it works seamlessly for the guests.

Harris said that her main goal for the club under her tenure as president will be to modernize it.

She said that would include adding lights to the club’s trap field, add a new gate system, and computerize their records. As of now, all of the club’s members have to sign up in person, rather than being able to do so online.

“Most people have entered the computer age. We’re still a little rustic up here.” said Harris.

Frappier offered his congratulations to Harris. He had been in the position for nine years. He will still be involved with the club, but as a range officer instead of president. He noted that he was happy to see her in the position as there are so few female sportsman’s club presidents in the region.

The membership period for the Westfield Sportsman’s Club runs from Oct. 1 to Sept 30 the following year. It offers several types of shooting ranges, archery ranges, and fishing as well as other outdoor activities on the Furrowtown Road property.