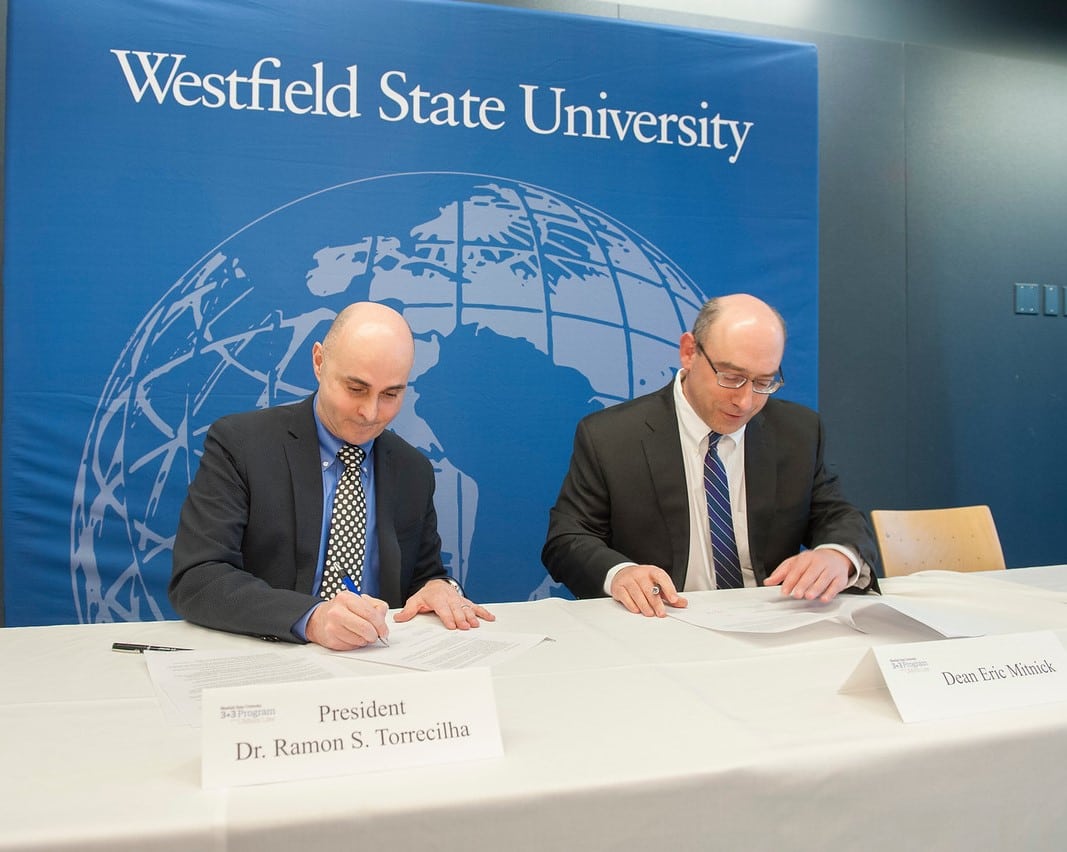 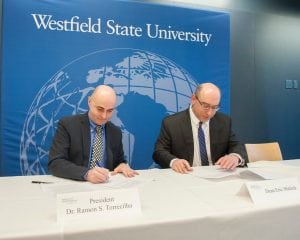 WESTFIELD – Westfield State University President Ramon S. Torrecilha and UMass Law Dean Eric J. Mitnick signed an agreement on Tuesday launching a new 3 + 3 program that will enable students interested in going to law school the opportunity to start after their junior year, saving students a year of tuition.
Following the completion of 90 credits at Westfield State, enrolled students may begin their first year at UMass Law in Dartmouth. Once their first 30 credits are completed, students will obtain their bachelor’s degree from Westfield State. Those 30 credits will dually serve as the first-year requisite toward their law degree from UMass Law.
Other requirements for admission into the program include a 3.0 grade point average (GPA), and a minimum score of 150 on the Law School Admission Test (LSAT).
“Not only is the match right between two public institutions, but UMass Law’s emphasis on using a law degree to promote service and social justice pairs nicely with the mission and values of Westfield State University,” said President Torrecilha.
Before signing the agreement, a panel of leaders from both schools talked about the need for public service attorneys in the country, and about UMass Law, the only public law school in Massachusetts.
Dean Mitnick said in Massachusetts family and probate courts, which rule on issues such as child custody, 86% of people go in without a lawyer; in housing courts, 92% of people facing eviction or foreclosure can’t afford a lawyer.
“This is what I mean by crisis,” Mitnick said. Instead of too many lawyers, he said there are insufficient affordable lawyers.
Mitnick said that UMass Law as a relatively new institution accredited in December, 2016, is ranked number one in Massachusetts and number three in the country for people going into full-time public law positions following graduation. He added though that while 31% of graduates go into public service work, a majority still go into private law.
UMass Law students also achieved fifth among nine American Bar Association (ABA) accredited law schools in Rhode Island and Massachusetts in their first-time bar pass rate. Tuition at UMass Law is also the lowest among the nine law schools, at $27,291 for residents, with grants and scholarships available.
Mitnick said that public service work gives the school its identity. In 2017, the school received the Public Service award from the Massachusetts Bar Association. In 2018, UMass Law also had the highest percentage of students of color of any law school in New England.
“We are thrilled to be partnering with other public institutions that share our values,” Dean Mitnick said.
“I am so excited. This is a joyous day for us, for our students especially. We’re going to send a lot of students your way, I think,” said Dr. Alice Perry, Westfield State Criminal Justice Associate Professor and former prosecuting attorney.
“I am a proponent of a law school education. I’m confident all of our majors are excited about this partnership,” Perry said, adding, “Going to law school is the best thing I ever did.” Perry said the law is the foundation for criminal justice, history, education, and political science. 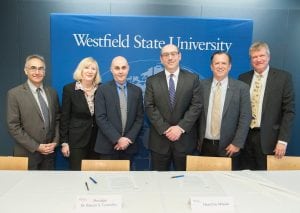 Dr. John Quinn, who leads the Public Interest Law Fellowship at UMass Law School, also spoke about his program, which is designed to help students accrue less debt. Up to 25 Fellowships are awarded to entering students each year in a highly competitive applications process. Students accepted into the Fellowship receive 50% off of tuition and fees in the program, leading to the possibility of a $40,000 law degree, Quinn said.
Requirements of students accepted into the Fellowship (“Fellows”) include 230 pro bono hours in public service. Quinn said since inception, students have provided 100,000 pro bono hours. Fellows also have a post-graduate requirement to go into public service law or public interest for four years. Quinn said to date, there are 70 Fellows out working, who also come back and give talks to new students.
Mitnick said every student at UMass Law is required to do 30 hours of pro bono work, and by graduation, most did five times that much.
Another program highlighted by speaker Attorney Len Zandrow is the Justice Bridge law practice incubator program, a post-graduate residency that nurtures and supports start-up attorneys, and provides access to justice in the community.
Zandrow said according to a survey conducted by the ABA, 49% of attorneys are in solo practices. “When you’re first starting out, you don’t have someone to show you the ropes; how to deal with difficult clients, and how to present issues in court. You’re scrambling,” he said.
Zandrow said the Justice Bridge law program is an incubator that nurtures new attorneys, with 60 mentors that help to provide support. The program offers discounts for different services, including free software, and free membership in the ABA.
Most importantly, he said, they provide work, adding that 70% of the time new lawyers spend is on hustling work. They target clients just above income eligibility for subsidized legal services, but the majority of clients do qualify for free legal services, and don’t get them, he said. “The system is overburdened, and understaffed,” Zandrow said, adding, “These folks are solo, too.”
Zandrow said they focus on high impact, limited scope cases, such as immigration Law, keeping “a roof over your head, right to see your kids,” job issues, employment law, and bankruptcies.
“Isn’t that what we’re celebrating here today – people who might serve modest income clients,” Zandrow said. He said the mentors in the incubator program have 30 years of law experience.
Following the panel discussion, President Torrecilha said he would like to see community college students have an opportunity to participate in the program. Mitnick said in the agreement signed with Westfield State, community college may transfer to WSU and get into the program, as long as they satisfy credits for the major. “We made sure of that,” Mitnick said.
Westfield State is the eighth school to sign a partnership with UMass Law, including Dartmouth, Boston, Lowell, Fitchburg, Worcester, Mass College Liberal Arts, and Becker College, the only private college to do so. Mitnick said UMass Law is also working on agreements with Framingham State, Salem State, UMass Amherst, and Bridgewater. “We are trying to have an impact in every zip code,” he said.
President Torrecilha said some of the agreements have taken two years to work out. “Here, the agreement took two months. We’re all working for the same people,” he said, emphasizing that the program is open not only for students in criminal justice and political science, but in English, ethnic studies, sociology, and history.
“It really opens up the possibilities for legal education for more students, and it’s an affordable program,” President Torrecilha said.