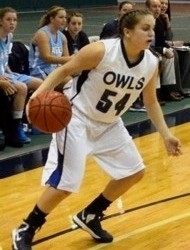 NORTHAMPTON – Sophomore guard Keri Doldoorian hit the go-ahead free throw and Westfield State University held Smith College scoreless in the final 2:05 in a 73-68 victory in non-conference women’s basketball action on Tuesday.
The Pioneers fall to 2-5 on the season, while Westfield State, which overcame a 40-32 halftime deficit, improves to 4-3.
Westfield State received a fine all around effort from junior guard Jen Ashton, who totaled 18 points, seven assists, six rebounds, and three steals. Doldoorian tossed in 16 points and junior center Gabby Felix posted a duplicate double-double with 15 points and 15 rebounds. Reserve forward Forbasaw Nkamebo chipped in 12 key point points and seven rebounds in 17 minutes.
Smith was led by a season high 18 points from Rosa Drummond, who pulled down nine rebounds. Paulina Solis added 12 points and six assists, while Marissa Munoz-Ruiz had eight points off the bench.
Smith struggled in the early going, connecting on just one of its first seven shots as the Owls raced to an early 13-2 lead. Alyssa Barrett, Solis, and Drummond each hit threes as part of an 11-4 run that pulled the Pioneers within four, but Ashton’s trey at the 11:27 mark and a free throw from Felix restored Westfield’s advantage to eight points (21-13).
Over the next nine minutes, Smith soared ahead, outscoring the Owls 27-9 to take a 40-32 halftime lead. Tia Karapoulios’ block on Felix set up the play that saw Solis hit a three at the other end, drawing Smith within two. Munoz-Ruiz’ layup at the 2:21 mark gave the Pioneers a 34-28 lead.
The second half began much like the first – the Pioneers missed the first four attempts of the half, while the Owls scored 12 straight points for a 44-40 lead. Consecutive baskets by Drummond tied the score at 44, and from there, the teams traded buckets, with neither going up by more than two until Mandy Castro’s three with 8:26 to play gave Smith a 57-54 lead.
Ashton’s layup with 5:55 to play tied the game at 59, and Alyssa Darling hit a three on Westfield State’s next possesion to put the Owls up 62-59. Drummond responded with a three of her own the next time down the court, and the teams again traded baskets before Solis’ basket with 2:05 to play put Smith up 68-67.
Doldoorian put Westfield State in front with a pair of foul shots at the 1:47 mark, and Felix sank a layup for a 71-68 advantage. Drummond missed a three from the top of the arc and Ashton sealed the win with two free throws in the final seconds.
Smith is off until Jan. 1, when the Pioneers travel to Middlebury College. Westfield State will play once more in 2013, hosting UMass-Boston on Dec. 12.