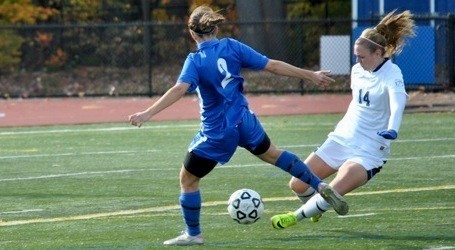 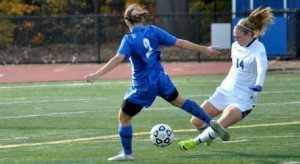 WESTFIELD – Junior forward Amanda Grant (Westfield/Westfield HS) scored both goals, including the game winner on a penalty kick in overtime, to lift Westfield State past Worcester State, 2-1, in MASCAC women’s soccer on Saturday afternoon, Oct. 26.
Westfield ups its record to 5-1 in the conference and 10-5 overall, while Worcester drops to 2-2-2 in conference and 7-6-2 overall.
Grant was taken down in the penalty box six minutes into the extra frame setting up the game winning goal. She calmly deposited the ball in the lower left corner lifting the Owls to their fifth consecutive win. Grant – a transfer from Holyoke Community College – is Westfield’s second leading scorer this season with 18 points (6 goals, 6 assists).
Worcester struck six minutes into the contest when Alyssa Sawyer gathered a misplaced Owls clear and fed Shelby Archer, who tucked away a shot from the top of the box.
Sawyer added a defensive save off a corner kick allowing the Lancers to take a 1-0 lead into intermission.
Grant tied the score early in the second stanza when she crossed a ball from the end line, hoping to set up a teammate but finding the far end of the goal instead.
Westfield outshot Worcester, 26-5.