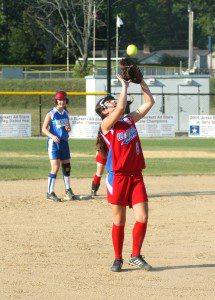 Westfield shortstop Vicky Camp settles under the ball for an infield fly in the third inning. A Winchendon player stands at second base. (Photo by Chris Putz)

WORCESTER – For the third straight time, the Westfield Little League Softball Senior All-Stars staved off elimination. Here’s hoping their fourth time has the same charm.
The Westfield Seniors avoided an exit from the state tournament with a resounding 9-2 victory over Winchendon Thursday night at Rockwood Field. They will return to Worcester to play in a best-of-three finals against Peabody-West on Saturday at 11 a.m. and 6 p.m. If necessary, a decisive third game will be played Sunday.
“The girls just have to keep relaxed and not too tense, but we have some leadership on this team,” manager Mark Reardon said, regarding his team’s chances.
This time though, both teams enter on equal footing with the records wiped away.
“Our catcher, Kaitlyn Puza, keeps the team focused,” Reardon added. “Players have stepped up into position. Everyone has contributed. We’re not a team with a bunch of superstars. We are one big bright shining star.”
Puza kept her batterymate, pitcher Jen Moller, on point. At times, Moller appeared to struggle with her control in the sweltering heat, but she remained poised and pitched out of nearly every jam from the mound.
Winchendon put runners on second and third in the second inning, but Moller forced a groundout to end the threat. In the third, Westfield’s pitcher walked two batters before forcing a groundout and two pop flies to escape a bases-loaded situation unscathed.
Meanwhile, the Westfield offense quickly roared to life.
Madison Brockney led off the bottom of the first with a single, got into scoring position on a passed ball, and scored on Carolyn Dufraine’s base hit.
Westfield exploded for five more runs in the third. Alyssa Clement led off with a bunt single, Brockney reached on a bloop single, and Puza blasted a two-run triple before she came home on a Vicky Camp hit. A little bit of wildness in the field for Winchendon and Taylor St. Jacques’ 2-run double made it 6-0.
Winchendon recorded its first run in the top of the fourth, courtesy of a single, walk, and ensuing infield error. But Westfield reclaimed a six-run lead in the bottom half of the frame with three straight singles from Puza, Camp, and Dufraine, the last of which resulted in the inning’s run.
Moller picked up steam on the mound over the fifth and sixth innings, retiring the side in the fifth – two batters via strikeout – before forcing three of the next four batters to ground out in the sixth.
Westfield took advantage of Winchendon’s wilting defense in the sixth, reaching twice by error, scoring on a passed ball and a Karly Mastello base hit.
Winchendon managed to score one run in the last inning, thanks to an infield and outfield error, and fielder’s choice. It was fitting that Moller had to get dirty on the game’s final play, going to the ground to field a weak hit ball and tossing to first base for the final out. A victory well-earned.