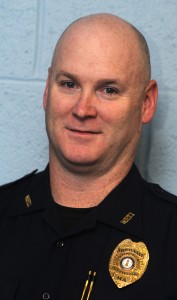 WESTFIELD – Last night, the Westfield Police Commission approved a plan proposed by Westfield Police Chief John Camerota to reorganize the department’s traffic bureau and increase the responsibilities of that bureau’s commander.
The bureau is currently commanded by a sergeant but Camerota said he plans to start filling that leadership slot with a lieutenant, who will not only serve as the department’s liaison with the Emergency Management Department, but also serve as incident commander during emergency situations.
The bureau is currently supervised by Sgt. Edward J. Murphy and Camerota said that he will become a shift supervisor, a duty he had performed before being chosen to lead the traffic bureau.
Camerota said that two lieutenants, Jerome Pitoniak and Michael Ugolik, expressed interest in the new position. He said that Pitoniak is the senior of the two lieutenants and said that he was chosen because he has had experience previously in the traffic bureau and is already trained in accident reconstruction.
Camerota said that Murphy has performed well, but said the decision to add to the position’s responsibility called for a more senior officer. “Ed stepped up when (Sgt. Brian) Boldini retired and he did an admirable job” Camerota said.
Pitoniak, currently the “split shift” lieutenant, has been supervising the patrol officers, while alternating two days working during the day shift and two days working the evening shift. He joined the Westfield Police Department in 1995 as a reserve officer and became a full-time officer in December, 1996. He was promoted sergeant in 2004 and became a lieutenant in 2008.
Pitoniak will take over command of the traffic bureau in the new year and will also serve as the department’s primary liaison with emergency departments, a duty currently performed by Sgt. Paul Beebe, in addition to his role as a patrol supervisor.
“We’re looking forward to moving forward, effective January one” Camerota said.
Pitoniak said that he is also looking forward to his new job.
“It puts me back to my roots” Pitoniak said. “I used to work in the traffic bureau when I was a patrolman.”
He said that, with his experience and training in the traffic bureau, he is confident about the traditional part of his new job and said that he does not foresee problems with the responsibilities which have been added to it.
Pitoniak said that he expects no problems working with the various emergency management agencies which have responsibilities in the city and said that he looks forward to becoming involved in emergency response planning.
“I’m looking forward to it” he said. “I’m very excited about it.”