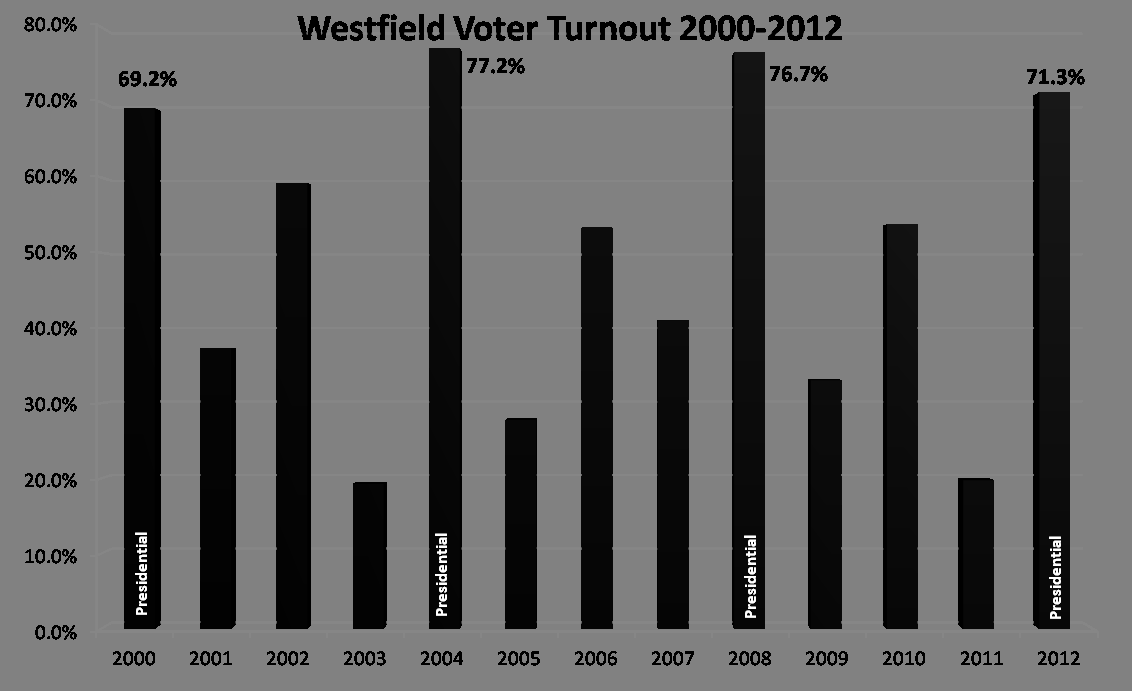 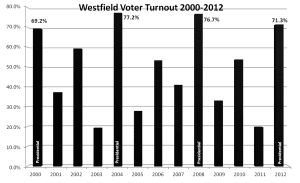 WESTFIELD – City voters, who stood in long lines at the city’s 12 precincts for the opportunity to cast ballots, bucked at least one statewide trend yesterday. Unofficial results show that 17,880 residents participated in the 2012 presidential election, 71.34 percent of the 25,062 registered city voters.
City residents appeared to set aside party affiliations and vote independently for candidates on both sides of the aisle.
City residents gave the Obama-Biden ticket a narrow majority, 51.6 percent over the ticket of Romney-Ryan which received 45.7 percent. former Governor Mitt Romney lost in his “home” state of Massachusetts, while U.S. Rep. Paul Ryan also failed to deliver his home state Wisconsin for the GOP ticket. Statewide, Barack Obama took 61 percent of the ballots, while Romney took only 37 percent of the votes cast yesterday.
However, local residents did buck the regional and statewide trend which sent Elizabeth Warren to the U.S. Senate in January. The Brown-Warren Senate race drew national attention and was a race that broke records in terms of campaign spending, with a combined $68 million spent by, or on the behalf of, the two candidates.
Statewide Warren received 1,603,045 (54%) to Sen. Scott Brown’s 1,372,086 (46%), but local voters were loyal to Brown, who as a Tea Party candidate won election in 2010 to complete the term of the late Ted Kennedy. Brown was the overwhelming favorite in this city, taking 56 percent of the ballots (10,031) compared to 42.9 percent for Warren (7,683 ballots).
Brown, in his concession speech to Warren, bolstered the spirits of his campaign workers by raising the possibility of a future run for public office.
“There are no obstacles you can’t overcome and defeat, defeat is only temporary”, Brown said last night to a packed house of supporters.
City voters gave former Springfield Mayor Michael J. Albano tempered support in his campaign to serve on the Governor’s Council. Albano received 8,767 ballots (49.25%) while Michael Franco, the GOP candidate garnered only 7,352 (41%) of the ballots cast.
Candidates running unopposed all easily won re-election to office.
Richard E. Neal, who survived a heated Democratic primary race, will return to the U.S. House of Representatives, although from a new district created as a result of population decline in the state as documented in the 2010 federal census.
State Senator Michael R. Knapik and state Representative Donald F. Humason Jr., both Republicans, will both return to Boston for another term.
Democrat Laura Gentile won a term as the Hampden Clerk of Courts and Democrat Donald E. Ashe will serve as Register of Deeds.
City voters heavily supported two of the three referendum questions yesterday as they cast ballots in the 2012 presidential election.
Question 1, which gave state voters the option of requiring car manufacturers to share technical information with independent repair shops, was supported by 74 percent of the 17,880 voters casting ballots Tuesday. Statewide that question was supported by 85 percent of voters. The ballot count in Westfield was 13,243 “yes” votes and 2,146 “no” votes.
Local residents also supported Question 3, voting by a 57 percent majority to allow the medical use of marijuana, with 10,176 “yes” ballots and 6,998 “no” ballots cast. The local result, again showing the city’s conservative trend, was slightly below the statewide vote of 63 percent in favor of that question.
However, city voters strongly rejected question 2 which would have legalized assisted suicide by allowing physicians to prescribe medication to end life, with 9,581 or 53.6 percent of voters casting “no” ballots on that question, with only a 42.8 percent casting a yes ballot. The local vote rejecting that proposal was substantially more stratified than the statewide vote defeating Question 2 by a 51 percent to 49 percent vote.