WESTFIELD – If there’s a buzz you are hearing, It’s probably because the B’s are heading back to the Whip City.
After a brief absence, the Bruins Legends are returning to Amelia Park. But this time there’s a bit of a twist. Instead of taking on the Westfield Firefighters Local Union 1111, this time the Boston Bruins Alumni will take on the Westfield Junior Bombers Youth Hockey Association.
On Sun., Jan. 12, the City of Westfield will play host to the legendary Bruins in a charity ice hockey game to benefit both organizations, sponsored by Westfield G&E. Event officials anticipate hundreds of fans from all over the Pioneer Valley are expected to attend. Tickets are affordably priced at $10.
The recent announcement to hold this fundraising event comes on the heels of Westfield Youth Hockey Association’s 50th anniversary and will go a long way to help ensure both organizations can continue to serve the local community and surrounding area. 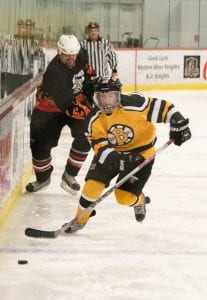 The Westfield Firefighters Local Union 1111 and Boston Bruins Alumni met in a benefit game in 2016. After a brief absence, the Bruins Legends will return to Amelia Park Jan.12 for another fundraising event when they take on the Westfield Youth Hockey Association. (Staff File Photo)

Westfield’s team will be comprised primarily of Westfield Youth Hockey coaches. Their sponsor for the game is Advance Manufacturing. The Boston Bruins Alumni team is a non-profit organization made up of past players of the B’s, such as former captains Rick Middleton, Terry O’Reilly and Raymond Bourque.
“Why wouldn’t I want to play in this game,” said Westfield Youth Hockey Mite B coach Mike Saltmarsh, who is one of several coaches expected to participate. “I grew up watching them on TV. This is a once-in-a-lifetime opportunity.”
Hockey fans are in for quite a treat. The best part about the game is that the portion of the proceeds should go a long way in helping further the continued growth of the Westfield Youth Hockey program, which ultimately keeps kids off the streets; builds character, team bonding, and leadership skills; and creates highly competitive high school teams.
Westfield has been a hotbed, of sorts, for a good part of the last two decades when it comes to ice hockey with the Bombers high school hockey team always in the mix for a championship, and with the city being home to Olympic gold medalist Kacey Bellamy, a US hockey defenseman.
The Boston Bruins Alumni team plays a half dozen or so games a month to help charities and various organizations. The legendary squad is comprised of Middleton, O’Reilly, Bourque, Rejean “Reggie” Lemelin, Andrew Raycroft, Glen “Feather” Featherstone, Ken Hodge, Jr., Bill O’Dwyer, Guy Larose, Joe Mullen, Ken Linseman, Tom Songin, Mark Mowers, Bob Sweeney, Frank Simonetti, Bill Bennett, Andy Brickley, Hal Gill, Steve Leach, Dan LaCouture, Jay Miller, John Carter, Bruce Crowder, Bob Beers, David Shaw, Cleon Daskalakis, Bruce Shoebottom, Andrew Alberts, Tim Sweeney, Al Iafrate, David A. Jensen, Fred Ahern, Graeme Townshend, Rich Brennan, and Terry Virtue.
More details regarding the Jan. 12 benefit game will be announced as they become available.