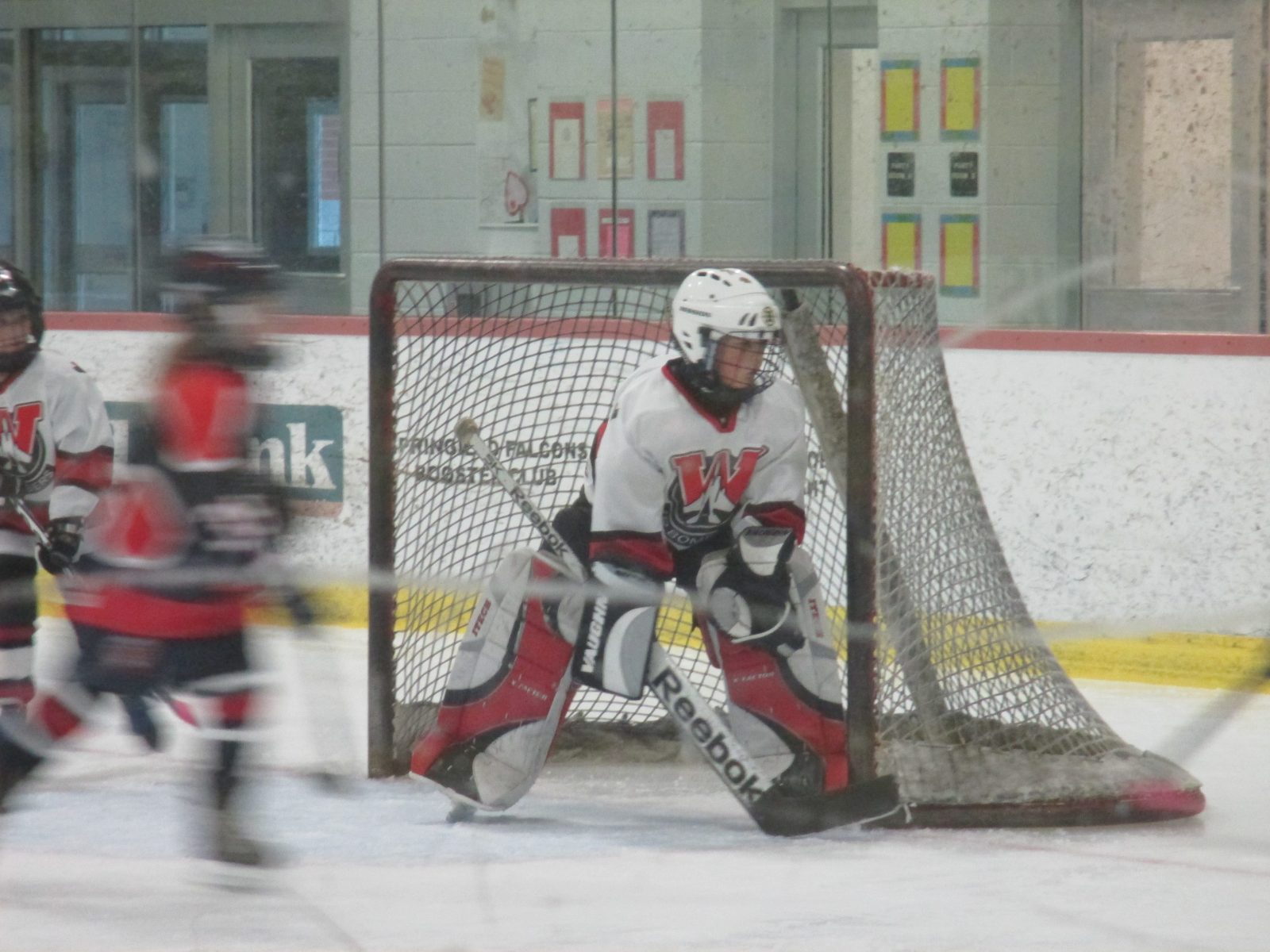 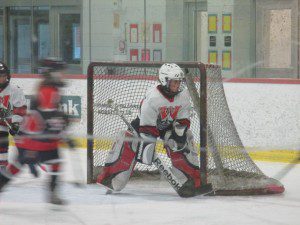 Ludlow Wildcats 8, Westfield Jr. Bombers 2
Saturday, October 25, 2014 at Smead Arena Springfield, MA
Division: Squirt 3
The 1st official game of the2014-2015 season for the Jr. Bombers Squirt 3 team was underway today. The Jr. Bombers played hard against the Ludlow wildcats with a score of 8 to 2 Ludlow.
Reid Imbriglio did a great job in the net today, with an average of 1.05 shots per minute, saving 22 of the 30 shots against him. J.J. Fox would be the player to score for Westfield with 1 unassisted goal in the 1st, as well as 1 unassisted goal in the 2nd. In the 1st period Jack Cashman made 1 attempt at goal, and 2 attempts in the 2nd. Michael Miller had a breakaway in the 1st with attempts at goal in the 1st, 2nd and 3rd periods. Bryce Alconis had a breakaway in the 1st period and an attempt at goal in the 2nd, as well as excellent stick handling and passing to his teammates. Nolan Lafayette had a dramatic breakaway in the 1st period while the crowd went wild! Sean Rodgers made an attempt at goal in the 1st 2nd and 3rd periods, as did Ryan Rodgers with an attempt in the 3rd as well. Spencer Roy made 2 attempts at goal with breakaways during the 2nd period and 2 breakaways in the 3rd. Mason Garrity also made an excellent attempt at goal during the 2nd. Ryan Delfalco and his fellow defense battled the Wildcats for control of the puck in the 1st period. John Lacey, Bryce Alconis, Sara McMahon and Spencer Roy were a force to be reckoned with, as they kept up the pressure and disrupted the Wildcat’s offensive line in the 3rd period. Case Viamari and Garrette Ondrick both played an excellent game today, great job everyone.

West Springfield Holy Name 9, Westfield Jr. Bombers 4
Sunday, October 26, 2014 at Amelia Park Ice Arena, Westfield, MA
Division: Squirt 3
In the 2nd game of the 2014-2015 season, the Westfield Jr. bombers went stick to stick with Westside’s Holy Name. Bryce Alconis did a terrific job-tending goal, with an average of 1.29 shots per minute, saving 32 of the 41 shots against him. Garrette Ondrick brought in the 1st goal of the game after a dramatic breakaway, this is Garrette’s first goal ever, and he will be a player to keep an eye on for sure!
J.J. Fox scored unassisted in the 2nd with a hat trick and again in the 3rd with a dramatic break away. Jack Cashman made 3 unassisted attempts at goal in the 3rd with 2 breakaways. Sarah McMahon played center today, made 2 attempts at goal in the 2nd both with breakaways. Sean and Ryan Rodgers played left and right wings to Sara McMahon and brought their “A” game with them, excellent job today! Michael Miller successfully disrupted 2 attempts at goal by Holy Name in the 2nd and had a dramatic breakaway with attempt at goal in the 3rd. Nolan Lafayette played a great game with 2 breakaways in the 2nd and 1 attempt at goal, he later disrupted Holy Name’s offensive line in the 3rd. Mason Garrity made 2 unassisted attempts at goal in the3rd period as well. Sean Rodgers brought his defense skills to the ice during the 1st period with excellent stick handling and strategy. Reid Imbriglio had 2 breakaways in the 1st with 1 attempt at goal, 2 attempts at goal in the 2nd and 3 breakaways in the 3rd with 1 attempt, wow, great job today Reid! Spencer Roy, Ryan Delfalco and John Lacey all played an excellent game today. Great job everyone!

Connecticut Capitols 6, Westfield Jr. Bombers 2
Saturday, October 11, 2014 at Amelia Park Ice Arena, Westfield, MA
Division: Squirt 3
A first official game for the Squirt 3 Jr. Bomber team. Everyone played hard against the Connecticut Capitols who have been playing together for the last 4 years; the Jr. Bombers were relentless from start to finish. Bryce Alconis, in his first ever goal tending experience; had his hands full in net with an average of 1.18 shots per minute, saving 32 of the 38 shots against him. J.J. Fox would be the player to score for Westfield, with Mason Garrity making an assist. Sarah “The Enforcer” McMahon kept the Capitols on their toes with great teamwork from Michael Miller, Garrette Ondrick and Case Viamari. Reid Imbriglio disrupted the Capitols offense line at every opportunity, and switched gears for a dramatic break away in the 3rd. Ryan Rodgers, Nolan Lafayette, Jack Cashman, Spencer Roy, Ryan DeFalco and John Lacey all played a great game today, everyone should be proud!

Westfield Jr. Bombers 11, Ludlow 5
Sunday, October 26, 2014, Smead Arena
Division: Mite 1
The Jr. Bombers brought their ‘A’ game against Ludlow in this early morning game. Ludlow started things off with their first goal just under two minutes into the game. That was the wake-up call for Westfield as they came back scoring five of their own during the next twenty-one minute stretch – Joey Roselli from Francis Powers, Evan Michelucci from Evan Grant, Darrin Schnopp from Powers, Jesse Spear from Jacob Jarrell and Jarrell from Roselli. Ludlow followed up with a goal of their own twenty-nine minutes in, only to have Westfield come back with another two; Katie Collins from Sean McMahon and Powers, unassisted. The remaining goals for Westfield were netted by Michelucci from Schnopp, two more by Powers, both unassisted and Jarrell from Spear. Ludlow would make a late game rally, scoring their final three goals of the game, but it was too little, too late. 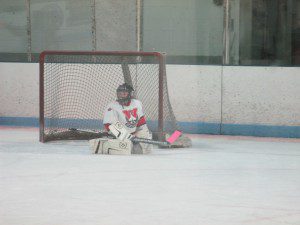 Amherst 8, Westfield Jr. Bombers 1
October 26, 2014 at Amelia Park
Division – Squirt 2
The Westfield Jr. Bombers Youth Hockey Squirt 2 team squared off against Ludlow on Sunday, October 26th at Amelia Park. Ludlow won this game 8-1.
The team skated out to a faster start than the day before in Amherst, but trailed 1-0 after the first period. In the second period, Ludlow took control and added more goals to go up 6-0 after two. Westfield had several breakaway chances, but the Ludlow goalkeeper came up with some big saves.
Westfield had many chances with their strong offensive lines of Brody Fitzgerald, Ian Bacon, Brannon Miele, Nicholas Paul, Aiden Lakin, Tyler Kutt, Michael Pelletier, George Kimball and David Forest. Westfield had its best opportunity when Tyler Kutt centered the puck to David Forest who tried to net it past the Ludlow goalie, but was denied the goal. The Westfield Jr. Bomber’s defensive line of Liam McKellick, Nathan Sarabaez, Elyse Eidinger and Zachary Kimball, along with goalie Joshua Lecrenski definitely gave their all in this game, but Ludlow would respond again with their strong offensive line with posting two more goals. The Westfield Jr. Bombers George Kimball closed out the scoring with his first goal of this season with about two minutes remaining in the game.

Amherst 4, Westfield Jr. Bombers 3
October 25, 2014 at Mullins Center
Division – Squirt 2
The Westfield Jr. Bombers Youth Hockey Squirt 2 team opened its GSL regular season with a match against Amherst, at the Mullins Center. In a back and forth game, Amherst came out on top with a 4 – 3 victory.
After a slow start, Westfield opened the scoring when Liam McKellick fed the puck to Ian Bacon on a breakaway. Bacon then drew the goalie out, went left, and slid the puck into the net. Amherst tallied twice to take a 2-1 lead at the close of the first period.
Westfield’s David Forest opened the scoring in the second period when his long shot found the back of the net, to knot the score at two. Amherst retook the lead when it capitalized on a broken attempt by Westfield to clear the puck out of its defensive zone. Westfield answered back when Aiden Lakin split two defenders and punched in the breakaway goal. When the buzzer sounded the second period, the scoreboard read 3-3.
Both teams played really hard in the third period. When it seemed as though the game would end in a tie, due to the great goal tending by Joshua Lecrenski, and the Westfield Jr. Bombers defensive line. Amherst would take the lead for good when they took advantage of a line change and scored the game winner with less than one minute remaining. The two teams will meet again on November 8th. – Courtesy of Westfield Youth Hockey