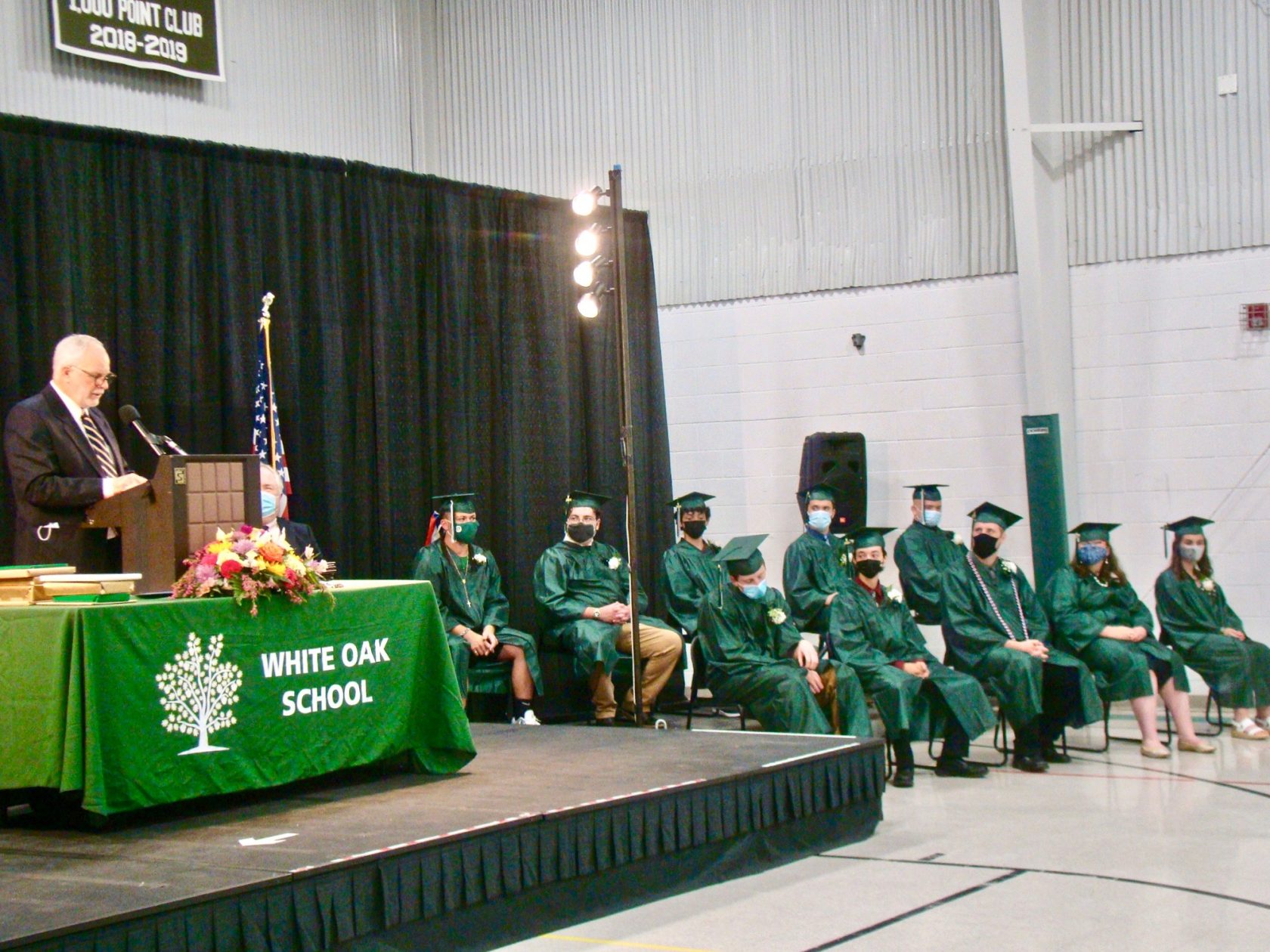 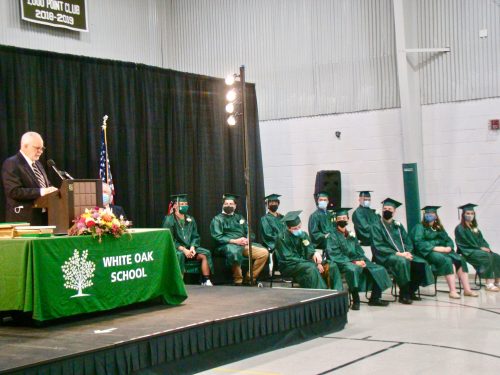 White Oak Dean of Students Gerard McGovern speaks about the accomplishments of the Class of 2021.

WESTFIELD – Ten students graduated from White Oak School on the afternoon of June 7 in a touching ceremony that was moved indoors due to excessive heat.
Families were seated in sections in the gymnasium and applauded as the seniors took their seats at the front, welcomed by Headmaster David Drake, Student Dean Gerard McGovern and Academic Dean Jody Michalski.

McGovern said everyone was gathered to celebrate the extraordinary accomplishments of the seniors, and quoted Charles Dickens, “It was the best of times, it was the worst of times…” to describe the pandemic year. He said despite the chaos and orientation, and despite the fear of disease, for each student the goal of completing their senior year was worth whatever effort it took. “You all have the right to be proud of yourselves,” he said. 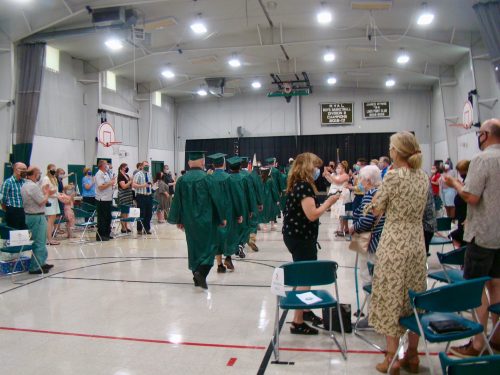 McGovern and Michalski listed the accomplishments of each student, and wished them all the best for their future and in achieving their goals. The seniors then spoke about their experiences at White Oak, many referring to the struggles they had in other schools.

Nicholas Anciello, who had attended White Oak since eighth grade, talked about trips to Washington, D.C. and Boston and Drama Club, and said all the teachers at the school had helped him to learn. Anciello will be attending Westfield State University to study business management and sports medicine.

Dean Argiro, one of the newer students to attend White Oak, will be attending Asnuntuck Community College to become a welder. He said school used to be hard for him, but thanks to his parents’ devotion and hard work, he was able to go to White Oak and work on a curriculum that was built for him. “We made it; even a global pandemic couldn’t stand in our way,” Argiro said. 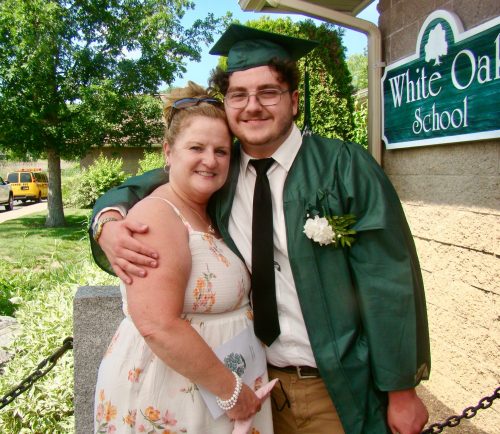 “I thought my life as a student was impossible and getting a job out of reach. I finally made it to the finish line,” said Thomas Mercier at the start of his speech. He thanked his friends and family who believed in him, and to those who didn’t, he said, “Look at me now.” He also listed all of his teachers by name, and thanked them for putting up with this “nonsense.” “Six years flew by,” he said.

Mercier especially thanked his parents. “The biggest reason I’m here is because of my parents. I know my father isn’t physically here, but he is looking down and getting a kick out of it. Love you, Pops – love you, Mother,’ Mercier said.

Christian St. Sauveur called his school experience “bumpy from the start,” which made him feel that he wasn’t good enough. He said in tenth grade he was diagnosed with a disability, and was thankful to come to White Oak for his senior year. He said the smaller classes, slower pace and one-on-one tutorial maintained his attention for “the first time in a long time.” St. Sauveur, who received a school award for outstanding character, has a goal to become a Naval officer. “I know with support I can make this dream a reality,” he said. 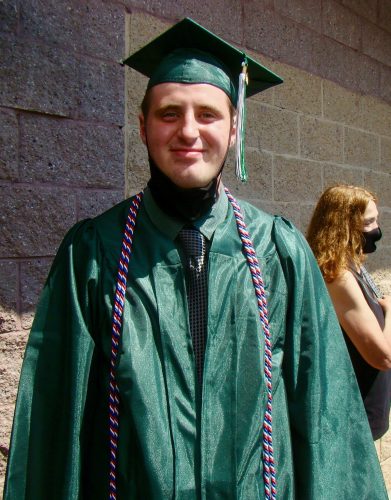 Stephanie Leo, who will be attending Berkshire Music Academy in the fall, also said her path to graduation had not been easy, especially the MCAS tests. “White Oak helped me to learn how to learn,” Leo said, adding that she was proud to have passed all of the MCAS tests.
“Each of us is creative and smart in different ways,” she said.

John Gorman, a six-year student at White Oak, will be attending Springfield Technical Community College to study computers. Gorman said the school helped him with his organizational skills, reading and writing, without which it would have been difficult to become an Eagle Scout. He was also thankful that in the past year he was able to give back to White Oak with his IT skills, something mentioned earlier by Michalski, who said, “I don’t know what we would have done without you.”

Ashley Haislip-Hansberry said her previous schools didn’t think she was smart enough to read. “I believed in myself and advocated for myself in IEP meetings,” she said, adding that her parents found White Oak School for her, which turned out to be a community and a family. “During my time here, I did things I would have never dreamed of doing before,” she said, thanking all of her teachers, her two dads and her grandparents. 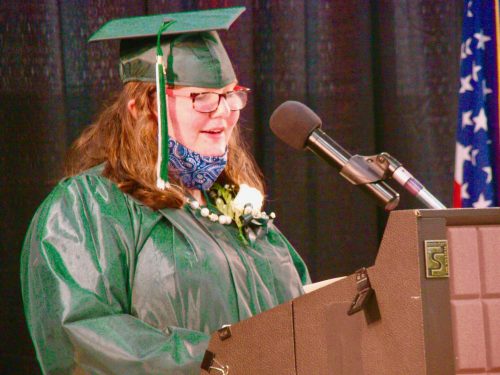 She also thanked Michalski for sticking with her for five years, even when she was “a hot mess express.” She said not having a mom in her life, Michalski was like a mom to her. Then Haislip-Hansberry, who plans to help children with disabilities, quoted from her inspiration, Malala Yousafzai, in saying, “One child, one teacher, one book can change the world.”

Also graduating were Davon Nowak, who plans to attend Greenfield Community College and become an EMT firefighter; Kaizer Maximus Lopez, who works for the Boys & Girls Club of Greater Holyoke and is their 2021 Youth of the Year, and Nickolas Swinicki, who will be going into job training to enter the workforce.