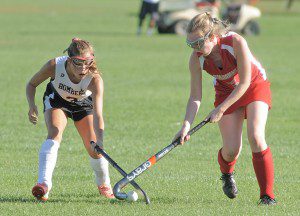 WESTFIELD – Although it is just midseason throughout the landscape of high school sports, the Westfield High School field hockey team is quickly racing toward potential postseason success.
Westfield sophomore Desiree Otero scored two goals – and Leighanne Sullivan and Lexi Minicucci each had one – as the Bombers shut out East Longmeadow 4-0 Monday at home.
“Westfield played great,” Bombers coach Karen Gomez said. “(Our players) turned up the heat in the second half.”
Westfield, now at 7-4, is just two victories away from already qualifying for the Western Massachusetts tournament with still four weeks remaining.
“We have two more games to secure,” said Gomez, whose Bombers face the visiting West Springfield Terriers Friday at 4 p.m.
Westfield opened Monday’s game with a 1-0 lead, thanks to Otero. The Bombers tallied three second-half goals. Sullivan made it 2-0, Minicucci tacked on the team’s third on a pass from Ashlee Owen, and Otero netted her second goal with five ticks left on the clock. Paige Templeton assisted on the play.
Templeton and Christina Onyski helped anchor the back and midfield areas for Westfield.
“We are happy with the way things are going,” Gomez said. “We are going to work our way into the second half of the season.”
Note: On Friday, Westfield recorded its first road victory, defeating South Hadley 2-1 with two goals from Owen. Karly Mastello (10 saves) was solid in net for the Bombers. Mastello earned a shutout Monday.