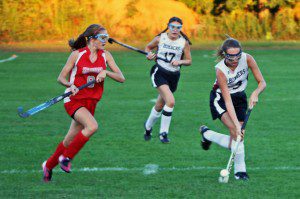 The Westfield High JV field hockey team gets out in front of East Longmeadow Monday in the Whip City. (Submitted photo)

WESTFIELD – The WHS JV Field Hockey remained unbeaten at home with Monday’s 6-1 victory over the visiting Spartans.
Six different Lady Bombers scored en route to the victory. Less than three minutes into the game, Shayna Buchanan started the scoring with an unassisted goal at 27:39. At 9:43, Julia Rowbotham passed off the ball to Brooke Keeney who immediately drove it into the cage. Westfield was up 2-0 at the half.
The Lady Bombers’ second half scoring started off even faster than it did in the first when Kali Fantakis scored her first goal of the season, unassisted at 28:45. Teammate Jordan Bower quickly added another unassisted goal at 27:16. The Lady Spartans started to make some noise at 12:12 when Jasmine Sabadosa scored the only East Longmeadow goal of the game.
Westfield’s offense stepped it up a notch at 10:52 when Liz Poteat passed off to Alexis Shia who scored the fifth goal of the game. Poteat then scored a goal of her own at 5:04 to seal the Lady Bombers 6-1 win. Goalkeeper Alexis Corcoran made one save in goal.
JV’s overall record is now 9-1-1.