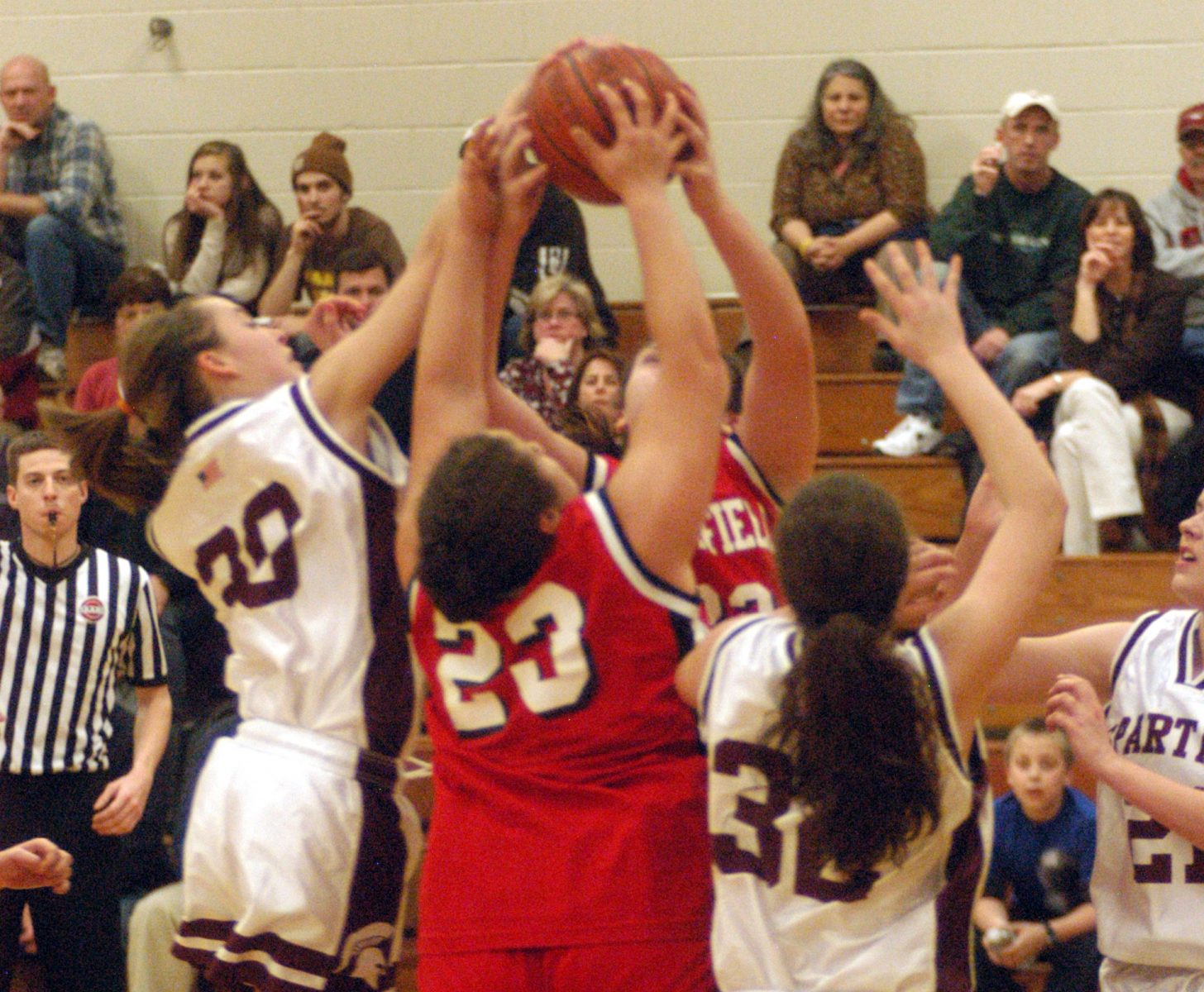 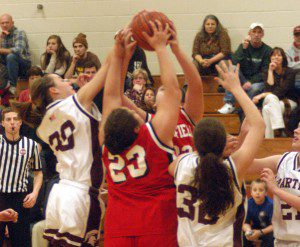 Westfield’s Kayleigh Kennedy converges on a rebound with a host of players Tuesday night at Monument Mountain High School. (Photo by Chris Putz)

GREAT BARRINGTON – The Westfield High School girls’ basketball team experienced a bit of growth since its opening night drubbing, and it resulted in a big victory on the road.
Westfield junior-center Keri Paton returned after a one-game absence, chipping in eight points – all in the paint in the second half – and three others reached double digits to help the Bombers net a bounce-back victory over Monument Mountain, 53-45, Tuesday night.
Sydney Ezold (12 points), Alyssa Clark (10), and Lexi Minicucci (10) led Westfield (1-1) in scoring.
“I thought we certainly handled the press better,” said first-year head coach Ralph Loos. “We played better defense throughout, more as a team, and it was nice having Keri back.”
Paton missed the opener at Northampton due to an undisclosed excused absence. She did not miss a beat in the second half, scoring two quick baskets in the low post. It paved the way for a 9-0 run, which included the first of two 3s from Clark midway through the third quarter.
Clark’s second 3-pointer preceded another interior basket from Paton late in the quarter. Cloutier took advantage of the mismatch in the post, scoring consecutive short-range buckets to give Westfield a 15-point lead, 41-26, in the final minute.
Monument Mountain pulled within six points three times in the fourth quarter, but Westfield’s quick, aggressive guard Lexi Minicucci had an answer each time. Minicucci hit a pair of deuces as their opponent upped its intensity. She then sank two free throws to salt away the game late.
While coach Loos noted the importance of Paton’s contributions in the second half, he was also quick to point out another warrior in the paint, Kayleigh Kennedy.
“I thought Kayleigh Kennedy set the tone for us early,” Loos said.
Kennedy scored five of her seven points in the first half, ripping down offensive and defensive rebounds and establishing a presence in the paint.
“We showed progress,” said Loos, whose team struggled to contain the Blue Devils in Northampton in the season opener. “I think their next gear is starting to come.”
Monday’s Results
BOYS’ BASKETBALL
Southwick 46, Holyoke Catholic 34
Pat King scored a team-high 10 points, and Derek Haskell had nine to lead Southwick. Rams’ John Collins finished with seven.