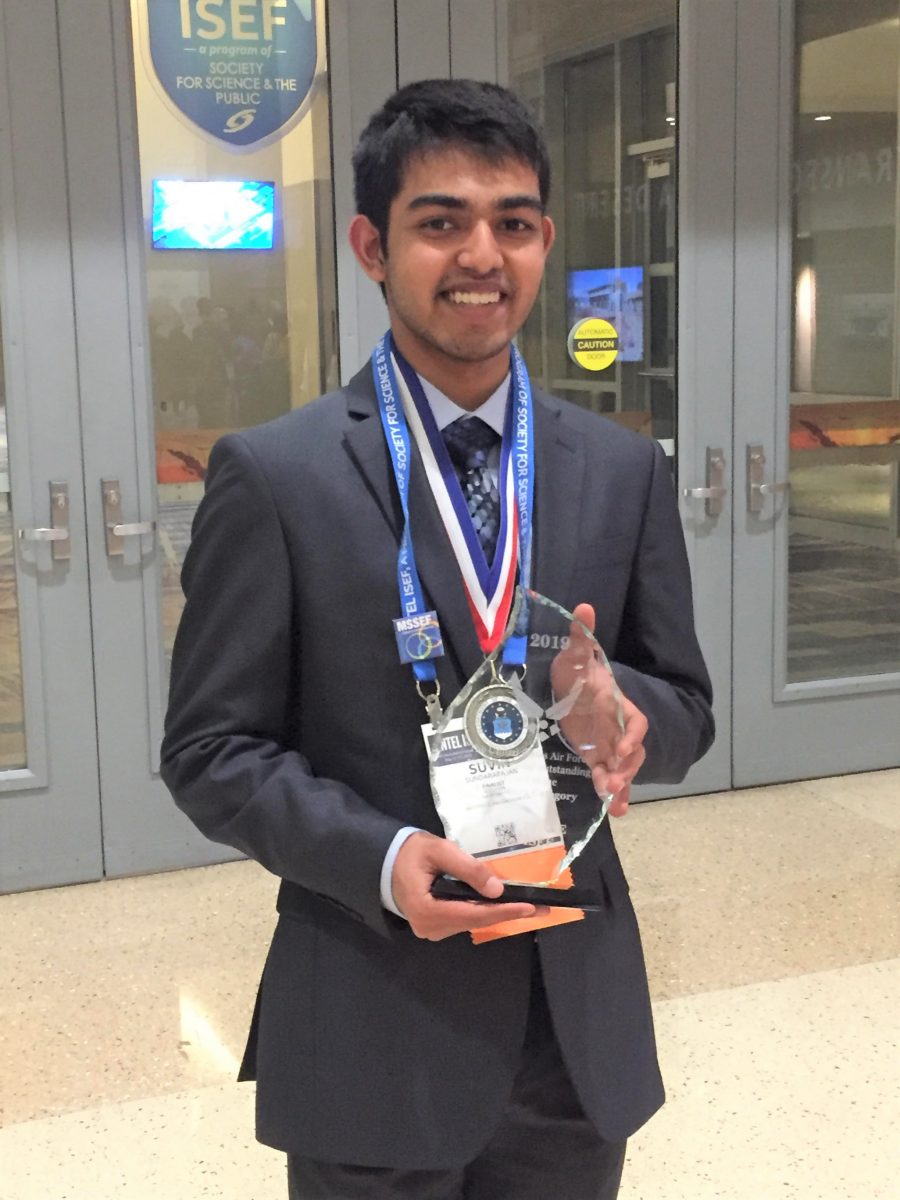 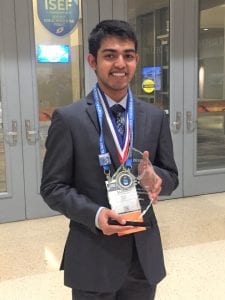 WHS sophomore Suvin Sundararajan displaying some of the awards he received at the Intel International Science and Engineering Fair in Phoenix, AZ. (Photo submitted)

WESTFIELD – Westfield High School sophomore Suvin Sundararajan received several top awards at the Intel International Science & Engineering Fair (ISEF) that he and WHS senior Abigail Goyette attended last week in Phoenix, Arizona.
Sundararajan, a sophomore, received first place in chemistry from the Air Force Research Laboratory on behalf of the United States Air Force for his project “Analysis of Manufacturing Process of D-Glucose-Based Thermoformed-Polymers.” Along with the award, Sundararajan received a $750 cash prize.
He also received second place and $1,500 in his chemistry category from ISEF. Sundararajan said he was at the top in Massachusetts out of five winners.
ISEF is the world’s largest pre-college science competition where over 1,850 high school students from more than 80 countries, regions, and territories present their independent research each year, according to WHS Chemistry teacher Jon Tyler, who accompanied his students to ISEF this year.
“Abby’s research expanded on work done in her AP Chemistry class with me where she analyzed concentrations of food dyes in sports drinks. Suvin continued work he began last year on a biodegradable polymer designed for mass production,” Tyler said, calling Sundararajan’s awards a “significant accomplishment.”
“Abby and Suvin had a great time in Phoenix for Intel ISEF. They were able to make many new friends with similar interests in science and engineering from around the country and the world…connections that may last a lifetime. As their teacher and mentor, I am extremely proud of both students and their hard work. They put in many hours above and beyond their normal school workload. They have been outstanding representatives of Westfield at every step,” Tyler added.
“We’re so proud of Abby and Suvin,” agreed Lauren Figy, science, technology and engineering supervisor for Westfield Public Schools. 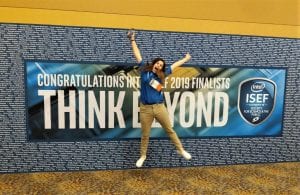 Senior Abigail Goyette in front of the wall of names at the Intel International Science & Engineering Fair in Phoenix, AZ. (Photo submitted)

Tyler said Goyette will be graduating from Westfield High School (WHS) this year and plans to attend Union College to pursue a degree in biomedical engineering. He said Sundararajan plans to continue his work next year on developing a mass-producible biodegradable polymer, and is hoping his research will afford him the opportunity to present his work at ISEF 2020 in Anaheim, CA.

“I’m pretty excited. I had a fun time. We went out to the Diamondbacks game, which they lost to the Pirates,” Sundararajan said after returning to Westfield. He said he definitely plans to continue working on his biodegradable plastic.
“My main goal is to help people and the environment, and there’s a lot more I can do with it. A lot of the judges were really nice, and they gave me more inspiration,” he said.
In his junior year, Sundararajan said he plans to focus on the new engineering pathway at WHS, or the chemistry pathway, he’s not certain. He said he has been doubling up on science courses, and wants to encourage a lot more people to take them. “We don’t have a lot of resources, but even without all of these, we are able to do well,” he said. “The Science Fair project helps me grow as a person, because I get a lot of experience,” he added.
“I want to thank a lot of people for helping me get this far, as this wouldn’t have been possible without them. My family, my mentor Mr. Tyler, my guidance counselor Mrs. Puleo, department of science head Ms. Figy, my teachers and so many others I couldn’t possibly fit in here,” Sundararajan said.