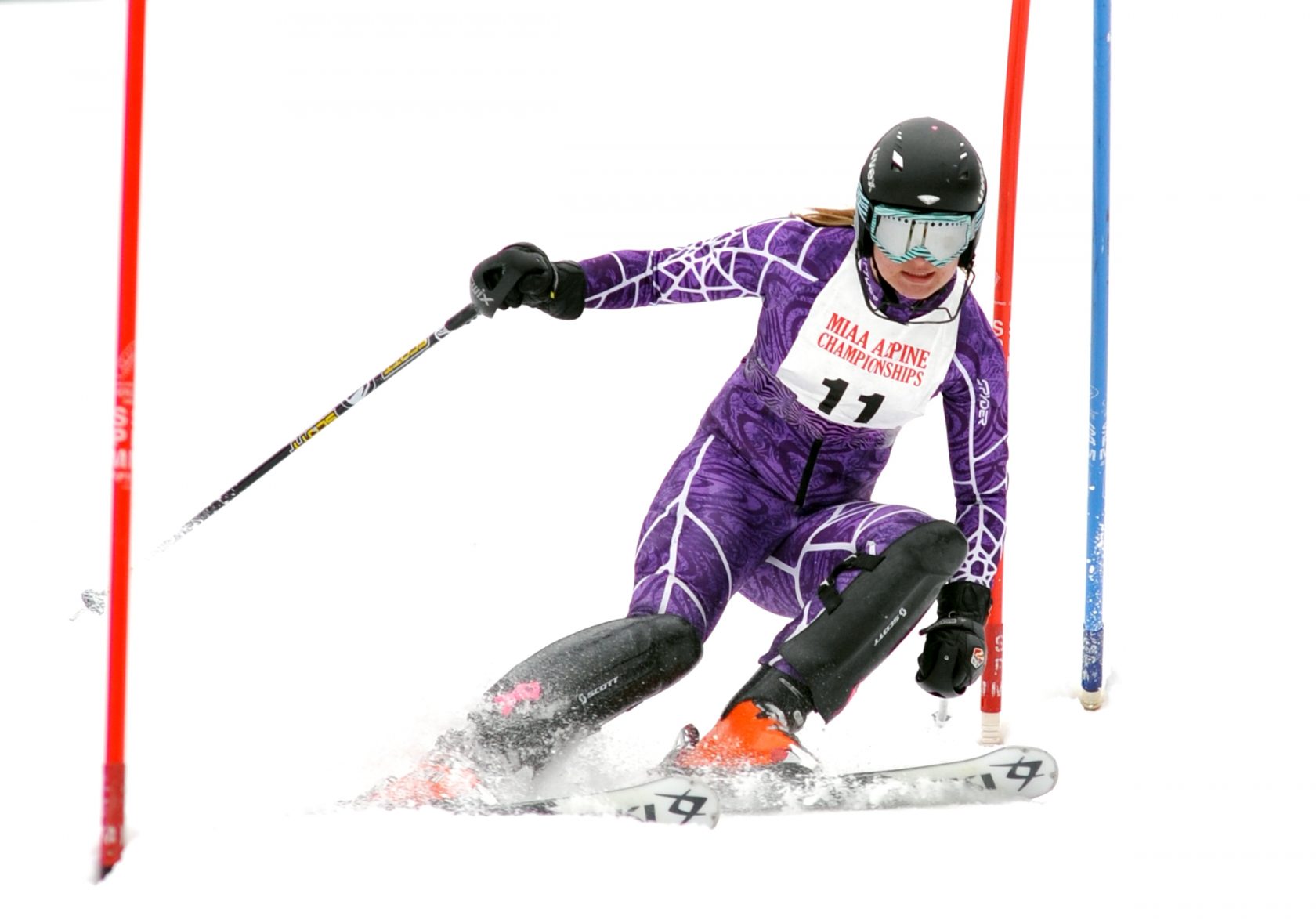 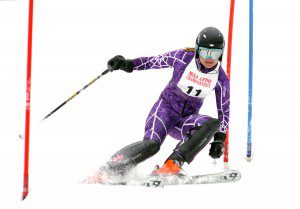 Westfield’s Jenna Rothermel passes through the final gates of the slalom course during the 2013 state ski championships in Charlemont. Rothermel is off to another fine start this season. (File photo by chief photographer Frederick Gore)

CHARLEMONT – Mother Nature sent a winter blast of (wicked) cold Arctic air up the slopes of Berkshire East in Charlemont Thursday, but several local high school skiers warmed up to the final results (not necessarily the times).
Westfield skiers Neil Sheehan and Jenna Rothermel led the school’s boys’ and girls’ teams, respectively, helping achieve a positive net result.
“It was a pretty cold one up there,” Westfield coach Monique Piotte said. “It was a good night on both sides (boys and girls), but rough going for everybody. Nobody was really too agile.”
Rothermel finished second overall on the slopes with a time of 38.61, just a hair short of first-place finisher, Jillian Scherpa (Agawam). Scherpa won in 38.38.
Rebecca Stephens was eighth overall, recording Westfield’s second best time of 43.87. Stephens was followed by fellow Bombers’ Hannah Giffune (team 3rd) and Allie Helliwell (team 4th).
Caitlyn Bodoh 47.72 was 12th overall and first for Gateway in 47.72.
BOYS’ RESULTS
Neil Sheehan placed first overall for Westfield and sixth overall in the North Division with a time of 26.3. Minnechaug’s Paul Leckey was first in 25.09.
The Bombers finished fourth among division leaders with a 112.76. Longmeadow placed first in 104.5.
Gateway was tops in the South Division with 111.12. The Gators were led by Austin Herman, who finished second in the division with a 25.67.
Piotte said the most intriguing story involved her team’s third-best skier Thursday night, Matt Walsh, who was stuck in the box at the top of the slope for nearly 10 minutes as the race track was shut down for timing issues.
“He came down really frozen, but he came down with a really good time,” said Piotte.
“All in all it was a good night for Westfield,” she said. “We had 25 racers in, and 25 racers with times. I couldn’t ask for anything better as a coach.”
Westfield and Gateway will hit the slopes again next week Tuesday and Thursday at 5 p.m.