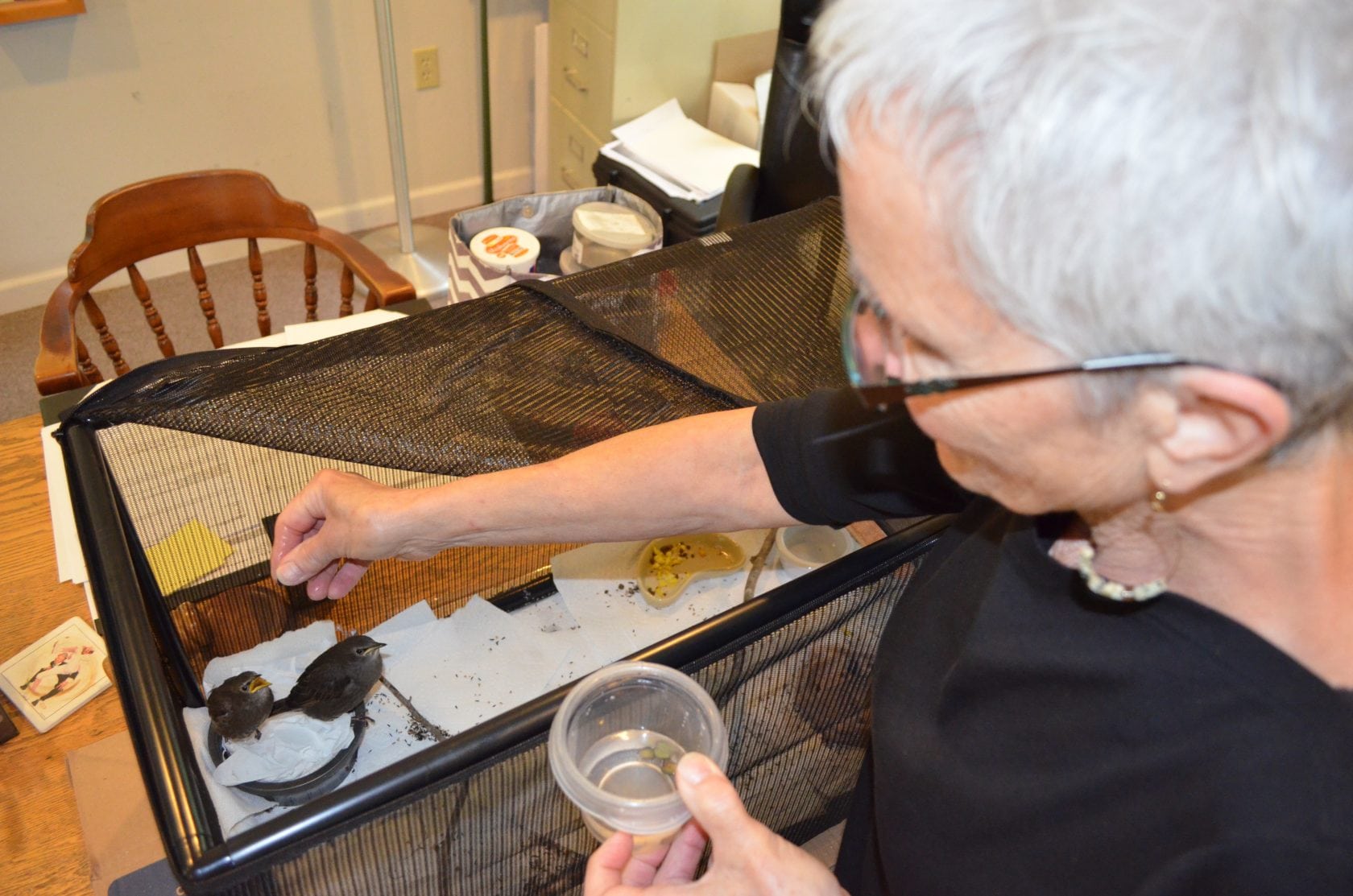 WORTHINGTON-Peggy O’Neal has a lot of patience which comes in handy when she is working with birds who require a lot of time and attention during their rehabilitation process.

On a recent morning at the Worthington Town Hall, O’Neal arrived early before she started work as the executive assistant to the selectboard to tweezer feed the two European Starlings currently in her care. 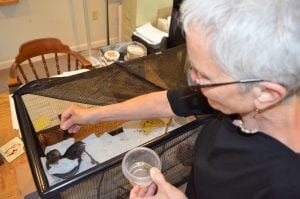 Peggy O’Neal has been feeding these European Starlings several times a day during their rehabilitation process.

“The birds have to come with me wherever I go,” said O’Neal, noting that when she first started working with them about a week ago she was feeding them every 45 minutes. Currently, the feeding time is now every 60 to 90 minutes during daylight hours. From dusk to approximately 5:15 a.m., the birds sleep – which means O’Neal too gets a break.

“They grow so fast and now their growing spurt is over,” said O’Neal. “They squawk like crazy when they see me because of the food.”

O’Neal has had a passion for helping injured, ill or orphaned birds since her youth.

“When I was a kid my mother got us started helping robins, pigeons and blue jays and then releasing them at a bird sanctuary in Lenox,” said O’Neal who grew up in Pittsfield. “Mom put us all to work caring for them.”

O’Neal’s “rehabilitation mentor” is Judith Pasko of Cummington, a wildlife rehabilitator who specializes in working with small mammals and native birds.

“There is a shortage of wildlife rehabilitators in the state,” said O’Neal. “This is my fourth year working with Judy and she alerts me when she has a small bird that I can care for.”

Since O’Neal already has a dog, cat and a horse, she only accepts one or two birds at a time that need tender loving care.

“Two is perfect for me at this time,” said O’Neal.

When O’Neal accepted the starlings she first created what she calls the “magic mixture,” consisting of one cup of high protein kitten kibble that she puts in a bowl with some warm water for softening purposes. She uses a pastry cutter to mash the mixture, then adds a hard boiled egg, 1 teaspoon of canola oil, 1/2 teaspoon yogurt, 1/2 teaspoon calcium carbonate (for their bones), and 1/4 teaspoon of bird vitamin. 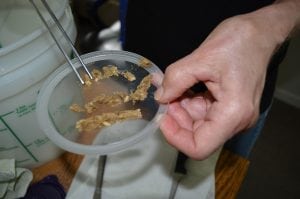 The “magic mixture” that helped the starlings put on weight.

“They had diarrhea when I first had them,” said O’Neal, hoping her magic mixture would do the trick.

The “Fons Diet” she concocted worked.

“It’s important to track their weight when they have diarrhea,” said O’Neal, adding “It’s all about the poop with the birds.”

Since O’Neal has a gram scale, she first weighed the birds on their arrival and the weights were 5.6 grams and 5.3 grams. Currently, their weights are 7.8 grams and 7.4 grams.

“The birds have had a huge jump in their weight,” said O’Neal, noting their current favorite treat is blueberries.

O’Neal stressed that if area residents find birds alone to first monitor the situation because the parents may be nearby.

“Parents will dive on you if you get too close,” said O’Neal, adding, “If any animal is not in imminent danger, leave it alone, unless it is orphaned, ill or injured.” 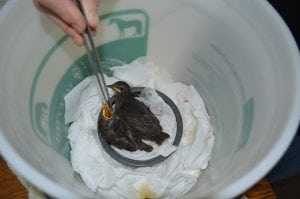 As O’Neal slowly helps the starlings with their transition to the wild, she will soon be releasing them from their cage to fly around her screened porch during the day.

“I will have saplings on the corners of the porch so the starlings can fly back and forth,” said O’Neal, noting at night they will be brought inside for safe keeping due to the cool temperatures and nature’s wild animals prowling her back yard.

Within the next week, O’Neal expects to release them near a “big beautiful farm with hundreds of acres of land and tons of birds.”

O’Neal noted the area she has chosen is a “perfect place for birds.”

For these two European Starlings, life is good but soon they will have to learn from other birds how to survive in the wild. For O’Neal, she will have done her best to give them a great head start.

“I’m trying to make a better place for wildlife,” said O’Neal, as she wrapped up their morning feeding and started her day job.