Editor’s note: Throughout the year, members of the WhipCity Wordsmiths share their insights as part of an ongoing writers’ series in The Westfield News. The latest topic we asked area writers to explore was their thoughts on the graduation season. Today’s submission is by Susan Buffum.

WESTFIELD-Susan Buffum is a local author and artist residing in Westfield. She is the cofounder, with daughter Kelly Buffum, of the WhipCity Wordsmiths authors/writers social and support group. She is also a director of Artworks of Westfield. 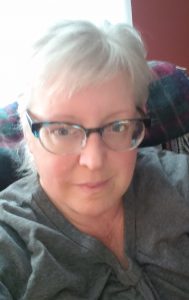 Susan Buffum is the cofounder of the WhipCity Wordsmiths with her daughter, Kelly Buffum. (SUBMITTED PHOTO)

Buffum has numerous novels, story anthologies, and novellas to her credit, and is known for her pen and ink/colored pencil wildlife, black squirrel, cat and dog drawings. Her books are available on Amazon and Kindle. Prints of her artwork are available in her etsy shop BicycleCityArtworks.

The title of her submission is “A Memorable Graduation.”

In 2009 our daughter, Kelly Buffum, recently graduated from Westfield High School 8th in her class, went off to college at Worcester Polytechnic Institute. She had chosen to major in mechanical engineering as her strengths were math and science. However, she had demonstrated throughout her secondary education that not only had she inherited her father’s logical, analytical brain but also her mother’s creative brain (with a talent for writing and drawing). Worcester Polytechnic Institute (WPI) had an intensive agenda for its’ students that was stressful to many students, but Kelly accepted the challenge and dug right into her studies.

The first three years flew by. At the beginning of her senior year John and I sent her back to WPI thinking that we’d be celebrating her earning her bachelor’s degree in mechanical engineering (with a concentration in materials science) in May of 2013. That all changed early in the first half of senior year when Kelly met with the head of her department to discuss the 5-year program since we had okayed her attending WPI one additional year so she could obtain her master’s degree. With the master’s degree she would have more leverage in obtaining a good job upon graduation.

When she and the head of the department looked over the courses she had already taken and her accumulated credits they discovered that due to her having taken all high level courses she was only a few credits shy of obtaining her bachelor’s and her master’s degree at the end of her senior year! They talked things over and she agreed to do a self-directed, non-thesis project in materials science in order to graduate with both degrees in 2013. John and I were stunned but also thrilled for her, although we worried about her having to do the self-directed project on top of her regular course load, but she assured us that she could handle it. She wanted to do it so we wouldn’t have to pay for a fifth year of college.

In the spring of 2013 we drove to Worcester for her graduation ceremony. She shared a senior on campus apartment with three friends so when we arrived there was a lot of activity as her best friend Bethany Almeida’s mom, Isabel Almeida, was helping her daughter don all her graduation regalia. They were also still packing the rest of Bethany’s belongings. John and I helped Kelly don her robe, stoles, and cords, plus her mortarboard so we could get pictures of the girls prior to them crossing campus to join the processional. The sad part was Kelly would be seated with the postgraduate students as she was receiving her bachelor’s and her master’s degrees while Bethany would be with the graduating seniors receiving their bachelor’s degrees. (Bethany went on to Brown University and earned her Ph.D. in bioengineering and will be an assistant professor at Clark University in Potsdam, N.Y. this fall.) 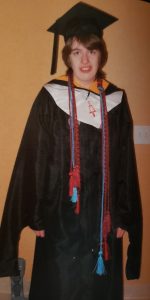 Kelly Buffum in robe, stoles, and cords ready to receive her bachelor’s and master’s degrees in four years from Worcester Polytechnic Institute in May of 2013. (SUBMITTED PHOTO)

Due to an RA flare-up I could not walk on uneven ground or climb the stairs up to the quad where the graduation ceremony was taking place. Kelly set up her laptop on the kitchen counter and I sat by myself watching the ceremony on her computer while John took photos on the quad. It was a blustery day and there was some rain near the end of the ceremony, but the proudest moment of my life was hearing my daughter’s name called and watching her cross the stage to shake hands with the college president and received her two degrees – her bachelor’s in mechanical engineering and her master’s in materials science and engineering. She was the first member of our immediate family to earn a master’s degree. It certainly was a memorable graduation day!