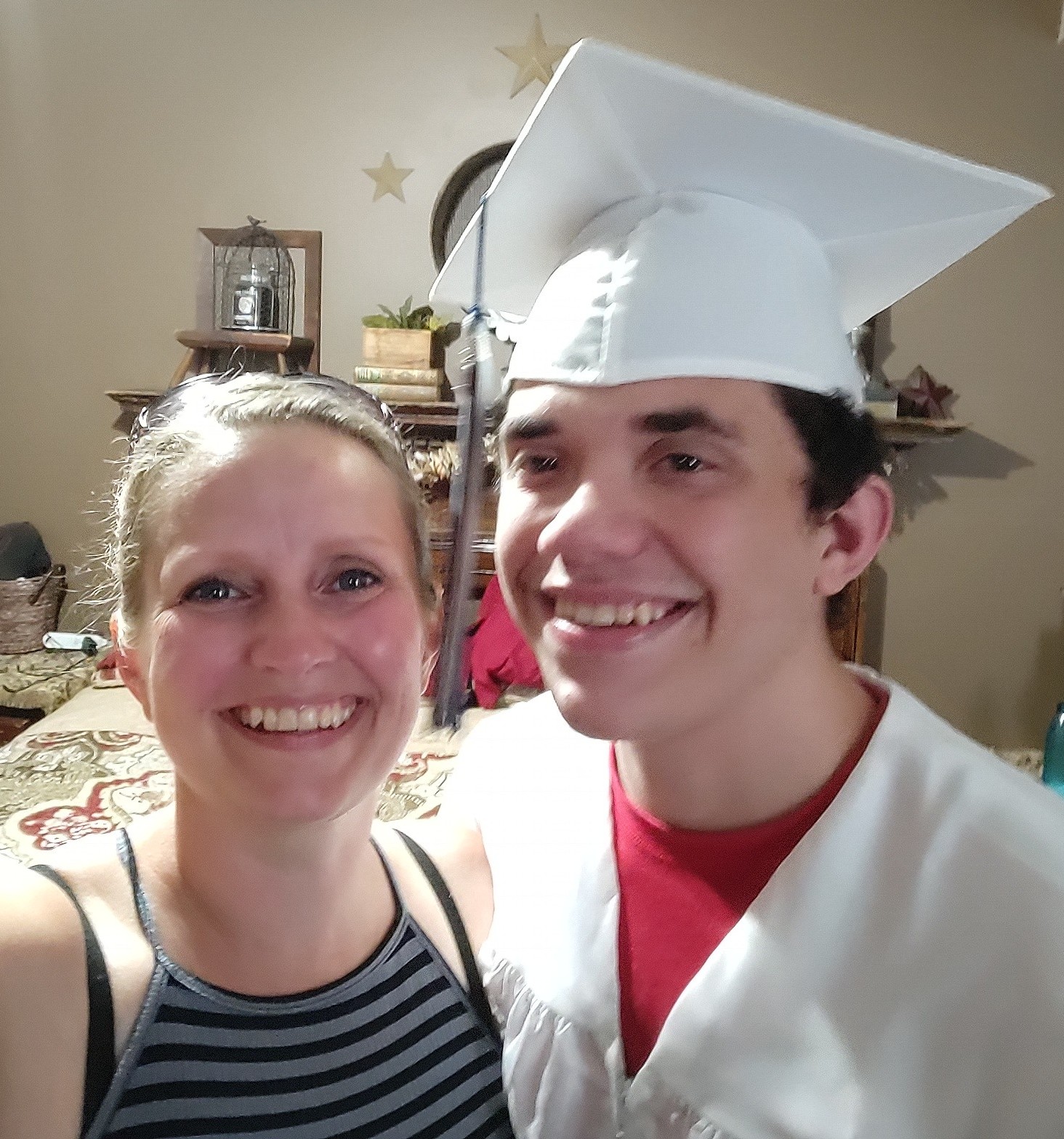 Editor’s note: Throughout the year, members of the WhipCity Wordsmiths share their insights as part of an ongoing writers’ series in The Westfield News. The latest topic we asked area writers to explore was their thoughts on the graduation season. Today’s submission is by Tanya Rogalski.

WESTFIELD-Tanya Rogalski is a resident of Westfield and a member of the WhipCity Wordsmiths. She is the mother of the writer group’s youngest author, Ayden Rogalski.

Rogalski owns Country View Homestead, where along with her family, she grows organic vegetables and raises various animals. She also hand makes a variety of items for the home, such as natural soy candles and wreaths. She home schools her children and believes that children learn best when they are able to experience the world around them by being hands-on.

Her submission is titled “Tragedy to Triumph – A Graduation is Celebrated.”

Tragedy to Triumph – A Graduation is Celebrated

We all dream of the day our kids will graduate high school. All those times you said “I love you and have a great day” when you dropped them off. The field trips you loved to chaperone because it was a day off for you too. School projects that they waited until the last minute to tell you about. Cheers when their team won a game or they aced that test they studied so hard for and tears when their heart was broken because it broke yours too.

Yes, I was dreaming about that day. I was already planning it, and then I got the call. The call that no parent should ever have to get.

Ma’am, this is officer — from the Westfield Police Department. Your son, Aaron, has been in an accident and is being taken to Baystate Medical Center. 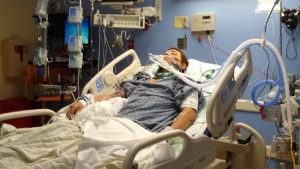 He fell and hit his head so they are taking him to the hospital. Why don’t you head on over there.

The way the officer talked was so calm. I thought I was going to walk in the hospital to find my son with a concussion. “Watch him for the next couple of days,” is what I expected the doctors to say. Instead, I heard the words … life-threatening, brain hemorrhaging, surgery and strokes as doctors, nurses and the EMT’s were rushing all around me to get him to surgery.

I could not have possibly prepared myself for what had really happened and how hard the road ahead was going to be. Instead of planning my 17-year-old son’s graduation, I found myself having to think about the real possibility of having to plan his funeral. “How could this be happening?” I must have asked myself that question a hundred times. Aaron is so full of life. He is such an amazing kid. Why is he fighting for his life right now? It still wasn’t clear what had happened yet but I can tell you, Aaron did not just “fall down.” That, I knew immediately. 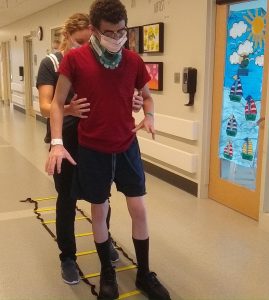 Finally, the phone rings in the waiting room. A nurse comes out and yells “THAT’S FOR YOU!” I got up and ran over to the desk. I was trembling with a fear I have never felt before. It’s too soon, I thought to myself. I was told it could take four hours to stop the hemorrhaging in his brain and drain the blood from inside his skull but it had been less than two. I was so scared to hear what the nurse on the other end was going to say.

Aaron is done and doing ok. They are buttoning him up and he’ll be brought up to the PICU. The doctor will be up soon to talk to you.

OH MY GOD! Thank you so much! That’s what squeaked out with my shaking voice. I hung up the phone, dropped my head on the desk and just started sobbing. Although I knew he wasn’t out of the woods yet, at least he’d made it through the first victory and I was very happy for that moment.

After Aaron was brought upstairs and they got him situated, I sat there and stared at my son. He had tubes down his throat to breathe for him and wires everywhere to keep track of his vital signs. I wondered how different his life would be now. If he recovered from the accident, would he be the same person we all knew? I tried not to think ahead too far. I wanted to concentrate on being in the moment with him and helping him get better.

At one point a doctor came in. She started asking me questions. That gave me no choice but to have to think about the future.

What is Aaron’s baseline personality? she asked.

Funny, that’s the first thing that came to mind because it’s such a big part of who he was. I used to tell him he should be a comedian when he was little.

Where does he go to school?

This is the question that really hit me because my answer was “this would have been his senior year.” When I said that in the context of past tense, it was like I was getting that phone call all over again. The uncertainty flooded in again and I started to cry. After that, the doctor was nice enough to give me a few minutes to regain my composure. I have always been what I call a “silver lining” kind of person. I like to be positive and when bad things happen … look for the silver lining so I was able to get it together pretty quickly. 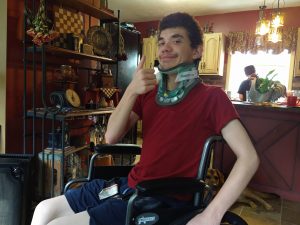 Aaron Costa is seen the day after returning home from his rehabilitation stay. (TANYA ROGALSKI PHOTO)

After a few days, Aaron started to wake up. I was both overjoyed and nervous. I didn’t know if he would even know who I was. He couldn’t talk and was barely coherent but my baby was alive and healing so I started to plan for a possible future of him needing to always be with me. I didn’t know if this would be the case but I wanted to be prepared just in case.

As the days went by, Aaron showed a ton of improvement, so much so that even the doctors were surprised. They said that his age is what saved his life because if he was an older man, the accident would have killed him. After two weeks in the PICU, Aaron was transferred to Boston for physical therapy. That is where we could really start to see where his cognitive skills were. To my and everyone else’s surprise, Aaron did remarkably well. This is when I started thinking about school and graduation.

Aaron started talking about going back to school. He couldn’t even walk yet but he was determined to go back. Unfortunately, the doctors and I agreed that Aaron could not attend school in the traditional way and that it wasn’t even something that we needed to be worrying about yet, but Aaron was so upset that he couldn’t go back to school that if there was a way to let him stay home and heal while still earning the credits he needed to graduate on time, I was going to find it.

I contacted the school for help but it didn’t get very far. It was a very complicated situation. Aaron would have needed a full-time caretaker at school with him when it wasn’t remote and would have to sit for hours in front of a computer screen when it was. It just wasn’t feasible.

Enter homeschooling. I already homeschool my two youngest children so this would be a cinch, right?

Well, it wasn’t terrible but homeschooling a 17-year-old senior with a traumatic brain injury definitely wasn’t the easiest thing in the world to do. We took it slow and built up the curriculum until he was back to the same level he had been at before the accident.

Finally, Aaron was ready to graduate!

We started planning his graduation. I found him a cap and gown. Ordered a tassel and his diploma. It was a great feeling to be planning this event when a few months earlier he was fighting for his life. What we didn’t account for was the graduations going on all around us. Aaron went to his school’s graduation and sat there in the bleachers while his classmates all walked up to get their diplomas. He was being supportive but I could tell it hurt him not to be up there with them. Nevertheless, we continued to plan his big day.

It’s graduation day! The food was prepared, the music was ready and Aaron was nervous. Only two people came to celebrate with us but we made the best of it. I put a post on Facebook explaining Aaron’s journey and I asked if people driving by would honk their horns for him. All day long we would hear horns blaring as people drove by our house. It was heartwarming to see so much support from total strangers. 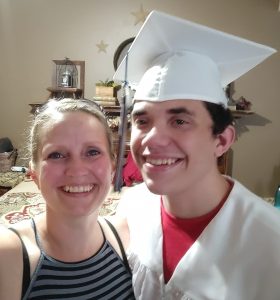 Tanya Rogalski is seen with her son, Aaron Costa, before he graduated. (TANYA ROGALSKI PHOTO)

It was time. We played the graduation song as Aaron walked into the back yard. As he approached me, I started to feel it. I knew I wasn’t going to be able to hold back the tears. I stood there holding his diploma and I just started to cry. There was my son. The child I almost lost only 11 months earlier, walking towards me in his cap and gown and his favorite red shoes.

His balance was a little shaky, as it always is now and I was brought back to when he was just learning to walk as a toddler. I thought about how I held his hand then and now I had to let it go. I handed the diploma to Aaron and gave him the tightest hug. I told him how much I love him and how proud I am of him.

Aaron’s graduation was, by no means, traditional but we had a graduation … that’s what matters. 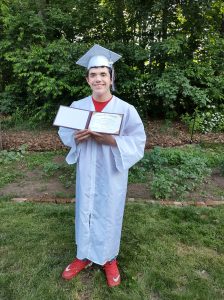 Aaron is 18 now. He is a grown man and although he will always have challenges ahead of him in his life, I know he can get through anything and will be just fine because …