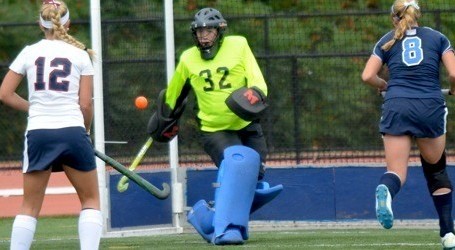 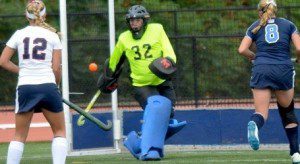 FITCHBURG – The Westfield State field hockey team scored four second-half goals in defeating Fitchburg State, 4-0, in Little East Conference (LEC) action late Tuesday at Elliot Field.
Westfield State broke the 0-0 deadlock in the 45th minute of play when freshman forward Holly Brouillette (Burlington, Mass.) received a feed from Sarah Pliszka and tucked the ball inside the far post for her team leading ninth tally of the season.
The Owls doubled their lead in at the 49:14 mark as Pliszka notched her fourth marker of the year off an assist from junior Kelsey Carpenter (Barre, Mass.) and deposited the ball into the back of the cage for the 2-0 advantage.
The visitors upped their lead (3-0) with just under 12 minutes remaining in the match as newcomer Meg Doherty (Mansfield, Mass.) one timed a shot inside the right post for her third score of the season of a feed from senior Courtney Araujo (Somerset, Mass.).
Senior Danielle Grenon (Somerset, Mass.) closed out the game’s scoring for the Owls with her second tally of the season at the 67:15 mark, resulting in the 4-0 final.
In the first frame, Westfield State nearly grabbed the lead at the 17:31 mark as junior forward Kelly Kenney (Suffield, Conn.) fired a shot from the top of the circle that appeared to be heading into the cage but Falcon back Kelly Finn (Fitchburg, Mass.) cleared the ball away at the last second to keep the score 0-0.
Fitchburg State’s best opportunity of the stanza came in the 24th minute of play when senior midfielder Rebecca Bush (Littleton, Mass.) blasted a shot that Owls keeper Megan Fountaine (Scituate, Mass.) turned aside to preserve the 0-0 stalemate going into the break.
Westfield State outshot Fitchburg State 22-11, while also holding a 12-0 margin in penalty corners. In the cage, sophomore Judith Valentin (Brockton, Mass.) posted 13 saves in the complete game effort for the Falcons, while Fountaine made five stops enroute to her first collegiate shutout for the Owls.
Fitchburg State (4-7, 0-6 LEC) will be back in action on Saturday as it travels to Plymouth State for a contest starting at 12 p.m. Westfield State (5-5, 2-4 LEC) will visit Framingham State University on Saturday at 11 a.m.

Lasell climbed to 9-2 on the season while the Owls slid to 3-8 for the year.
Mike Skelton (Conway, N.H.) scored a pair of goals pushing his season total to nine, while Nery Guerra (Guatemala City, Guatemala) added his first goal of the year and Nick Liquori (Westfield, Mass.) collected his second tally of the year for the Lasers.
Westfield scored their lone goal of the match when a service from Dan Brady (Wilbraham, Mass.) set up Dylan Rizzo‘s (Milford, Mass.) header for his first goal in the 2013 season.
Lasell opened the scoring in the third minute of play when Jose Cabrera (Queretaro, Mexico) held up a ball just inside the top of the box before slipping a tidy ball to Guerra who slotted home to give the hosts a 1-0 lead.
The Lasers tacked on their second goal of the match in the 14th minute when sophomore back Taylor Witherbee (E. Bridgewater, Mass.) got forward into the attack and drove the endline before hitting a perfect cross that found Skelton unmarked on the back post. Skelton tapped the service home making it 2-0 in favor of Lasell.
Westfield State created some dangerous chances on the counter attack, but they were unable to get a foot on a series of crosses into the Lasell box. The Lasers’ Skelton added his second of the match in the 37th minute when he tallied from the penalty spot, sending Lasell into the half with a 3-0 lead.
The Owls pulled a goal back in the 70th minute when Rizzo’s powerful header back across the goal on the service by Brady beat Lasell keeper Miguel Colmenares (Caracas, Venezuela).
Lasell pushed its advantage back to three goals in the 81st minute when a deflected ball in the box fell to Nick Liquori. The sophomore feinted the Owls keeper out of position before tapping the ball into the open net for the final 4-1 margin.
Miguel Colmenares earned the victory in goal for Lasell, recording one save on the afternoon. Kris Carrington (Agawam, Mass.) made five saves in the net for Westfield, taking the loss.
Westfield State will return to action when its hosts Salem State in MASCAC play on Saturday October 12th at 6:00 p.m., while Lasell will travel to Johnson and Wales University as its looks to remain undefeated in GNAC play in a 1:00 p.m. match.