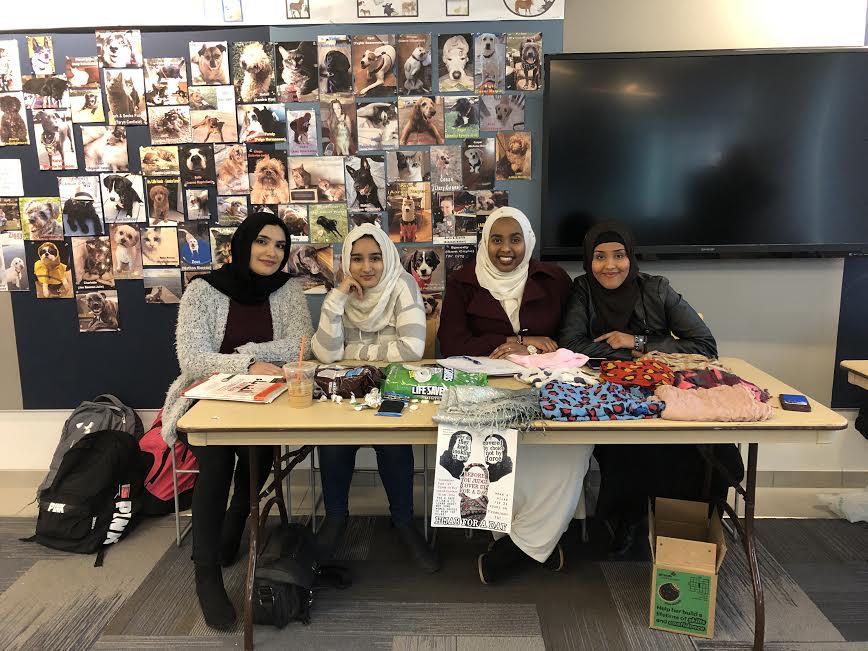 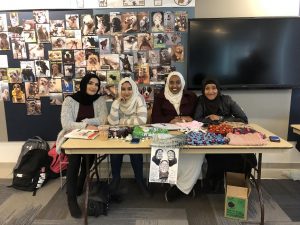 The Westfield State University Muslim Student Organization put on a Hijab for a Day. Pictured are from right to left Nadia Mohamad, Faiqa Ashraf, Asma Muse, and Hivo Hussein (Photo by Taylor Choqette)

On Thursday February 1st, the Muslim Student Organization (MSO) at Westfield State University put on a Hijab for a Day event. From 10 a.m. to 7 p.m., members of the MSO manned a booth in the Ely Campus Center, and encouraged their fellow female students to wear a hijab for a day.

A hijab is a type of veil or headdress that covers a woman’s head and chest and is considered a symbol of modesty and privacy. It is worn by Muslim women usually outside of the home when they will be around men who are not immediate family.

Hijab for a Day is an international event that the MSO has been bringing to WSU for several years. “It’s World Hijab Day, so that’s why we’re doing it today,” MSO Vice President Faiqa Ashraf said. The club tries to bring the event to campus every semester, and after the racist incidents that happened during the fall semester, they thought it was important to educate the campus on what it means to wear a hijab.

“We want the campus to know that there’s a Muslim presence,” said MSO Secretary Idil Hussein, “and we need more people to be educated about what the hijab means.” A Muslim woman chooses to wear a hijab as a sign of modesty. The MSO also handed out pledges to participating students that further explained a woman’s choice to wear a hijab. “It allows them to showcase their abilities as equal,” the pledge explains.

The MSO’s hope for this event, as explained in their pledge cards, is threefold, “(1) to take a walk in their shoes, (2) to educate others and (3) address Islamophobia not only on the WSU campus but also in public/this country.”

The organization, which is open to all students, hopes to bring more cultural events to campus to increase education on campus.