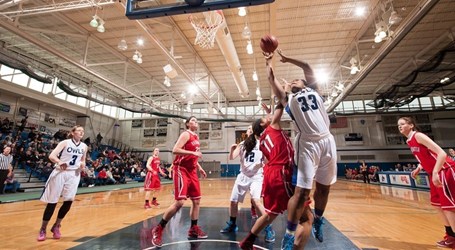 WESTFIELD – Westfield State women’s basketball is the number-one seed in the 2015 ECAC Division III New England tournament.
Westfield will host a first round game on Wednesday against #8 Western New England University at 7:00 p.m. the Woodward Center.
The full tournament field includes 1. Westfield State 2. Emmanuel College, 3. Roger Williams University, 4. Norwich University, 5. Keene State, 6. Brandeis, 7. Curry College and 8. Western New England.
The owls make their ninth appearance in the ECAC Tournament. Westfield advanced to the ECAC Championship game in 1993, and last appeared in the ECAC’s in 2013.
The Owls will have plenty to play for with an ECAC title on the line, one which the program has never won. Additionally, the Owls will have a chance to tie the school record for wins in a season (23) with a win over Western New England in the opening round.
The game will be a rematch of a regular season tilt that Westfield won, 59-48, on February 5. Westfield got 17 points each from senior guard Jen Ashton and junior forward Forbasaw Nkamebo. Dorothy O’Neil and Sammie Olson each scored 11 for the Golden Bears.
The top seed in the ECAC tournament offers some salve for Westfield as the Owls were not selected for the NCAA tournament, as the lone bid from the Massachusetts State Collegiate Athletic Conference went to Bridgewater State, which upset the Owls, 60-57, in the conference tournament championship game on Saturday.
Westfield was certainly a near miss for that field with a 22-5 overall record and a 3-1 mark against teams that received bids to the tournament. The D3Hoops.com website, which provides comprehensive coverage of division III college basketball called Westfield State the first team out of the bracket in their bracket projections on Sunday. (See that story at: http://www.d3hoops.com/playoffs/women/2015/projected-womens-bracket).