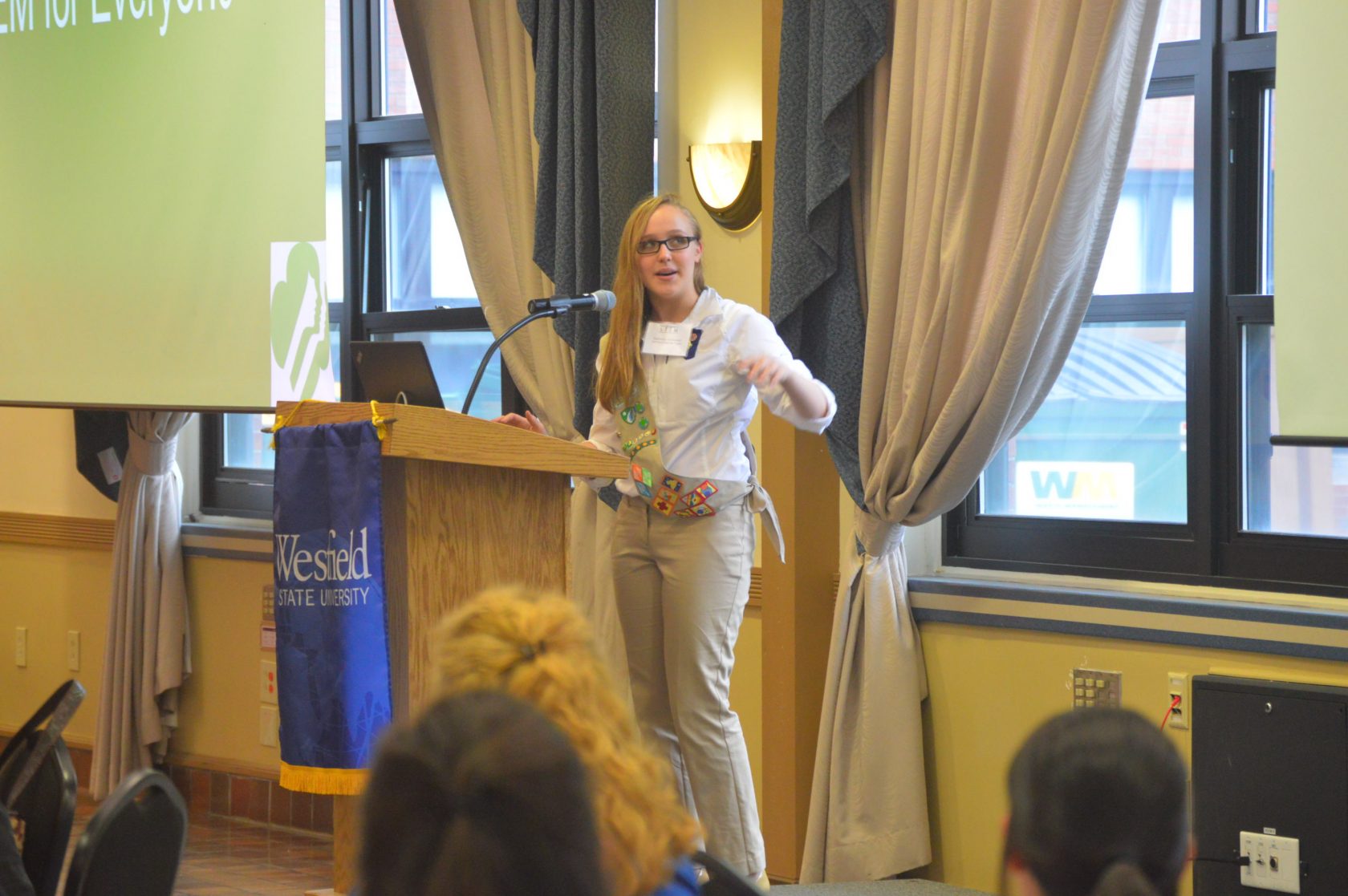 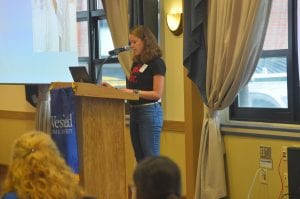 Evelyn Humphries, 15, talked about her desire to become a pediatrician and her time with the Eureka! program. (Photo by Peter Currier)

The network had been inactive for several years before being relaunched in an event attended by educators and young STEM (Science, Technology, Engineering, and Mathematics) students.

The network re-launch is intended to get more students to pursue STEM education and careers while raising the number of educators qualified to teach STEM related classes.

“Across the room we have educators from across the Pioneer Valley in three counties in both formal and informal settings,” said Dr. Jennifer Hanselman, the dean of WSU’s College of Math and Science and the regional manager of the Pioneer Valley STEM Network, “We have administrators, students, program developers. The one thing we have in common: We have a mission of STEM literacy.”

Hanselman was followed by WSU President Dr. Ramon S. Torrecilha and Massachusetts Assistant Secretary for Career Education Bob LePage. Torrecilha called for more diversity in the STEM field, and encouraged more women and minorities to pursue such careers, as he believes they are underrepresented in the field.

“This call to diversify in the STEM field, sits squarely with the Department of Higher Education’s mandate for equity,” said Torrecilha, “This mandate also aligns with our values at Westfield State University.”

The relaunch event precedes WSU’s STEM week, which takes place from Oct. 21-25. Hanselman said that STEM week is a week in which WSU students, faculty, and staff emphasize outreach into the community to promote STEM education. During STEM week last year, students did activities involving programming and biology with kids at the Greater Westfield Boys and Girls Club.

Students may also do more STEM related activities in their classrooms during that week.

Following LePage and Torrecilha were several students in the Pioneer Valley who spoke about their experiences thus far in STEM fields and what others can do to encourage further interest.

The first student was Evelyn Humphries, a  junior at Longmeadow High School. Humphries spoke about her involvement with Eureka! Girls Inc., a five-year program for teenage girls that helps to prepare them for future STEM careers.

“From a very young age, I was very into fashion and dressing up. I used to strut around my house and my town in my princess dress, my mom’s high heels, some fancy sunglasses, a tiara, and, most importantly, my mom’s white lab coat,” said Humphries, who added that it is her goal to become a pediatrician.

Other speakers included Catherine Morrisey and Elizabeth Rainier, both  juniors at Westfield High School. Morrisey spoke about her goal to become a pediatric oncology nurse. Morrisey and Rainier spoke about their two science projects that involved research into global warming and resulting climate change.

One of their projects was to determine if extreme hot or cold temperatures introduced by climate change would suppress the reproduction rate of some animals. Their experiments in a lab at WSU helped them determine that yes, non-optimal temperatures do affect reproduction rates. Their other project was to test the affect of rapid temperature increases on coral bleaching, a phenomenon caused by climate change that essentially starves coral, killing entire ecosystems.

The pair, with help from Hanselman, determined that there was an increase in coral bleaching associated with rising temperatures.

Other organizations promoting STEM education at the event included the Springfield Thunderbirds and LEGO Education.