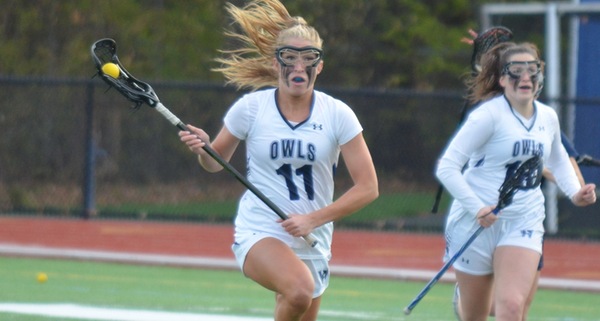 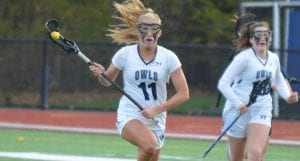 WESTFIELD – Westfield State got three goals each from three different players and senior goalie Maria Woodall stood tall in net as third-seeded Westfield State posted a 14-8 win over second-seeded Bridgewater State in the semifinals of the MASCAC women’s lacrosse tournament at Swenson Field in Bridgewater on Thursday evening.
The Owls advance to play top-seeded Framingham State on Saturday at Framingham at 1:00 p.m., with the winner of that game earning the conference title and the league’s automatic bid in the NCAA Championship.
Westfield State won its fifth straight game and their eighth in their last 10 to improve to 10-9 overall, while Bridgewater’s season comes to a close with a 12-5 mark.
Westfield jumped on top early as Sydney Lambert got the Owls on the board first just 1:12 into the game, then Lucy Barrett faked left and drove right for 2-0 Owls lead.
The game tightened up in the middle stages, as the Bears tied the game at 4-4 with 5:53 left in the first half, but the Owls grabbed a 6-4 lead at the half, scoring with nine seconds left in the opening stanza as Barrett fed Alexa Tonelli for the goal.
Goals from Elizabeth Navoni and Rachel Gelina extended the Owls to 9-5 less than six minutes into the second half, but Bridgewater again responded, netting back to back goals and Elizabeth Ettridge’s marker with 23:31 left forced an Owls timeout.
From there, the Owls gradually extended their lead, and the lead ballooned to five goals, with a fast break goal as Caroline Arket carried the ball up field, found Haley Mate’ with a pass, and Mate’ served Gelina crashing the net from the right side for a 12-7 Owls lead and forced the Bears into a time out of their own with 12:57 left in the game.
The Owls held the Bears at bay with strong defensive play, and Woodall was credited with nine saves as the lead was never seriously threatened in the final 10 minutes of play.
Gelina, Tonelli and Lambert each scored three goals for the Owls. Lambert moves into fourth on the Owls all-time scoring list with 210 career points. Sam Donohoe added two goals and Barrett a goal and two assists. Westfield had a 23-17 advantage in shots on goal and forced 22 turnovers while committing just 10 themselves.
Victoria McDonough netted four goals and an assist for Bridgewater, with Ettridge adding three goals. Bears goalkeeper Hayley Varner made nine saves.
The Bears offense came in averaging more than 13 goals per game, and had defeated the Owls 13-12 on March 30 in the conference opener for both teams.
Westfield will be making its fifth straight appearance in the MASCAC Championship game under head coach Jeff Pechulis. The Owls are 2-2 in those title tilts, winning the 2017 and 2018 titles.­­­
Westfield fell to Framingham, 10-9 in overtime in the only meeting between the two schools this year, at Framingham on April 16. The Owls and Rams met in the 2018 MASCAC championship game at Westfield, with the Owls emerging a 17-10 winner to claim their second straight MASCAC title. – Courtesy of Westfield State University Sports