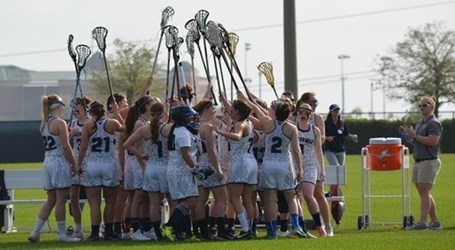 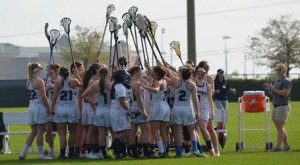 WESTFIELD – The Westfield State women’s lacrosse team is the top seed in the upcoming Massachusetts State Collegiate Athletic Conference tournament and earned a first round bye.
Westfield, 12-4 this season and 7-0 in the MASCAC, has won a school-record 12 consecutive games since dropping their first four games of the season. The MASCAC title is the first for the school, and the schools only outright conference title (Westfield shared the NEWLA championship in 2009) in the nine-year history of the Owls’ varsity program.
The Owls will play at home at Alumni Field throughout the tournament. Westfield will host a semifinal game on Thursday at 7 p.m., facing the winner of #4 seed Worcester State and #5 seed Framingham State, who will play a quarterfinal game on Tuesday.
Westfield leads the league in scoring offense with 15 goals per game. The Owls have a well-rounded attack with junior Meg Griffin leading the way with 54 goals. Blair Smith (37 goals), Samantha Lungarini (36) and Stephanie Lenhardt (29) add scoring punch for the Owls. Lenhardt leads the team with 31 assists and is the school’s career record holder in that category.
Defensively, junior Mimi Khampaeng has backstopped the Owls all year, and holds a 10.00 GAA and a .488 save percentage.
The Owls veteran defensive corps, anchored by senior captain Ashley Spindel, and juniors Jordan Daniels, and Jen White have helped the Owls pull away from their opponents in many games this season.
The winner of the MASCAC tournament gets an automatic bid to the NCAA Division III national tournament. Bridgewater State won the last two MASCAC titles.
Full details on the tournament and brackets are available online on the MASCAC conference website.