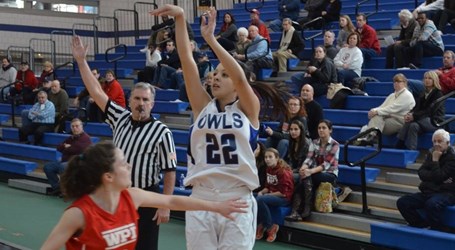 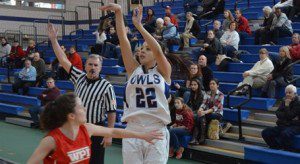 WESTFIELD – Senior guard Jen Ashton scored 18 points, grabbed nine rebounds, handed out eight assists and came up with seven steals to lead Westfield State to a 68-56 over Framingham State in a MASCAC women’s basketball game at the Woodward Center on Saturday afternoon.
The Owls stay unbeaten in conference play at 7-0, and improve to 15-4 on the season. Framingham drops to 11-7 overall and 3-4 in league play.
Westfield jumped out to a 27-11 lead in the first 10 minutes of the game and forced the rams to try and play catch up for the rest of the afternoon.
The Owls led 39-26 at halftime.
Framingham opened the second half with a 15-6 scoring burst that cut Westfield’s lead down to four, 45-41 on a layup by Sarah Palace with 12:43 to play.
After a Westfield timeout, the Owls pounded the ball inside to junior center Forbasaw Nkamebo for an easy bucket, but Framingham answered with a three pointer from Lauren Donohue that trimmed the Owls lead to three points, 47-44.
Westfield ratcheted up the defensive pressure, and quickly extended the lead back to eight points after four free throws from Ashton and a layup from Rebecca Sapocukey gave Westfield a 53-45 lead with 8:44 left in the game. Westfield’s lead would never be less than six points the rest of the way.
Nkamebo added 14 points and eight rebounds, and senior center Gabby Felix chipped in with 14 points on 7-10 shooting an grabbed seven rebounds.
Framingham was led by 16 points and 11 rebounds from Nicole Bostic. Alyssa Rackliffe added 15 points and 11 rebounds, while Sarah Palace added 14.
Both teams had great ball movement.. Westfield finished with 23 assists on 28 buckets, while Framingham had 16 helpers on their 20 field goals.
Westfield will be back in action on Tuesday at Bridgewater, while Framingham will travel to Fitchburg State.