WESTFIELD – Freshman Caroline Smart scored a game-high four goals and junior Stephanie Lenhardt had two goals and a game-high four assists to lead Westfield State University to a 14-7 victory over Salem State University in the Massachusetts State Collegiate Athletic Conference (MASCAC) women’s lacrosse opener on Saturday afternoon.
The Owls improve to 3-4 overall after erasing an early 4-2 deficit in winning their home opener. The Vikings drop to Salem jumped out to 2-0 lead in the opening five minutes, forcing Westfield first-year head coach Jeff Pechulis to call a timeout.
Trailing 4-2 at the midway point of the first half, the Owls outscored the visitors, 8-0, over the next 27 minutes to take a commanding 10-4 lead with 17:29 remaining in the game. 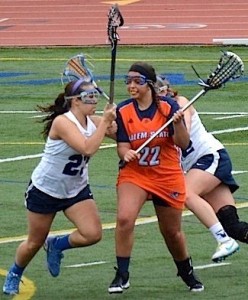