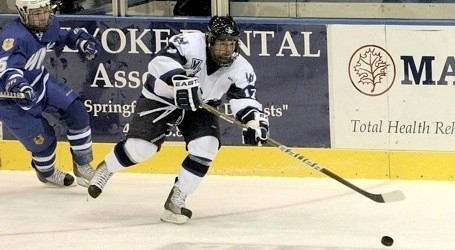 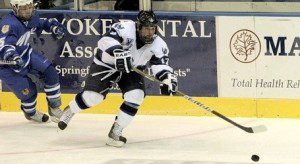 WESTFIELD, Mass. – Sophomore forward Frank Zuccaro scored with 1:23 remaining in overtime to lift Westfield State University to a 3-2 victory over Plymouth State University in the Massachusetts State Collegiate Athletic Conference (MASCAC) ice hockey opener late Tuesday.
The surprising Owls improved to 4-0 in defeating the defending MASCAC champions. Plymouth, receiving votes in this week’s USCHO national poll, is 1-1.
Zuccaro scored near the faceoff circle after Plymouth had attempted a clear out on an Owls’ power play. Zuccaro’s game-winning shot was directed just inside the left post.
Just prior to the game winner, Westfield had fought off a Plymouth 5-on-3 power play for nearly two minutes. Both teams played well defensively and Plymouth fought off a Westfield 5-3 power play late in the third period.
Westfield opened the scoring in the eighth minute of the first period on a goal by freshman Mike Puddifant, with the puck fluttering over the goalie’s shoulder into the net.
Plymouth got power play goals from Travis Stevens midway through the first period and Kyle Greco in the second period to take a 2-1 lead.
Westfield knotted the score on Brad Norkum’s power play goal from inside the blue line with 5:57 remaining in the second period.
Westfield goalie Ian Perrier, a sophomore transfer from Northland College in Wisconsin, was outstanding between the pipes in his season debut with 47 saves, including 17 in the third period and six in overtime. Plymouth goalie Jack Astedt made 36 saves.