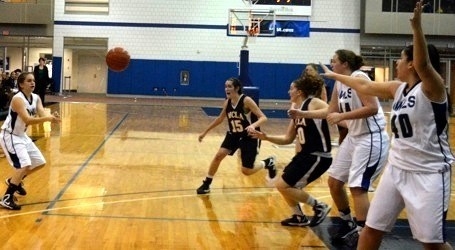 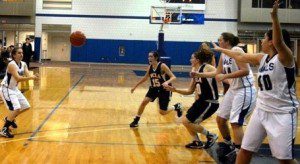 WESTFIELD – Sophomore center Gabby Felix notched another double-double with 18 points and 12 rebounds, and sophomore guard Jen Ashton had 18 points, seven assists and three steals to power Westfield State University to a 71-44 victory over MCLA in Massachusetts State Collegiate Athletic Conference (MASCAC) women’s basketball action Tuesday.
The Owls evened their MASCAC mark at 2-2 and improved to 10-7 overall. MCLA is 0-3 and 8-8.
MCLA’s Alyson Stolz (20) and Tashari Rainwater, and Westfield’s Tania Ortiz do the basketball shuffle as they chase down a missed shot. Photo by Mickey Curtis
Also scoring in double figures was freshman point guard Keri Doldoorian (14 points, 8 rebounds) as the three underclassmen combined for 50 of the Owls’ 71 points. 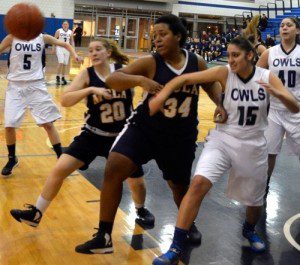 MCLA’s Alyson Stolz (20) and Tashari Rainwater, and Westfield’s Tania Ortiz do the basketball shuffle as they chase down a missed shot. (Photo by Mickey Curtis)

The Owls took control early as a traditional 3-point play from Ashton gave them an 18-9 lead at the 13-minute mark. Westfield led by as many at 14 points in the first half but MCLA closed to with 10, 35-25, at halftime.
An 8-0 scoring spurt on two layups from both Felix and senior Briana Kelly boosted the lead to 18 points, 51-33, with 14:07 remaining.
The Owls continued their scoring onslaught and led by as many as 31 points, 69-38, with 4:01 remaining.
Both teams committed 23 turnovers but Westfield shot a sizzling 55 percent from the field and dominated the boards, 40-23. Ashton and Felix both made 8 of 11 field goal attempts.
MCLA, meanwhile, shot 30 percent from the field, including a 4 for 10 effort from 3-point range in the first half.
Lucy Tremblay led the Trailblazers with 12 points, five rebounds, seven assists and four steals.