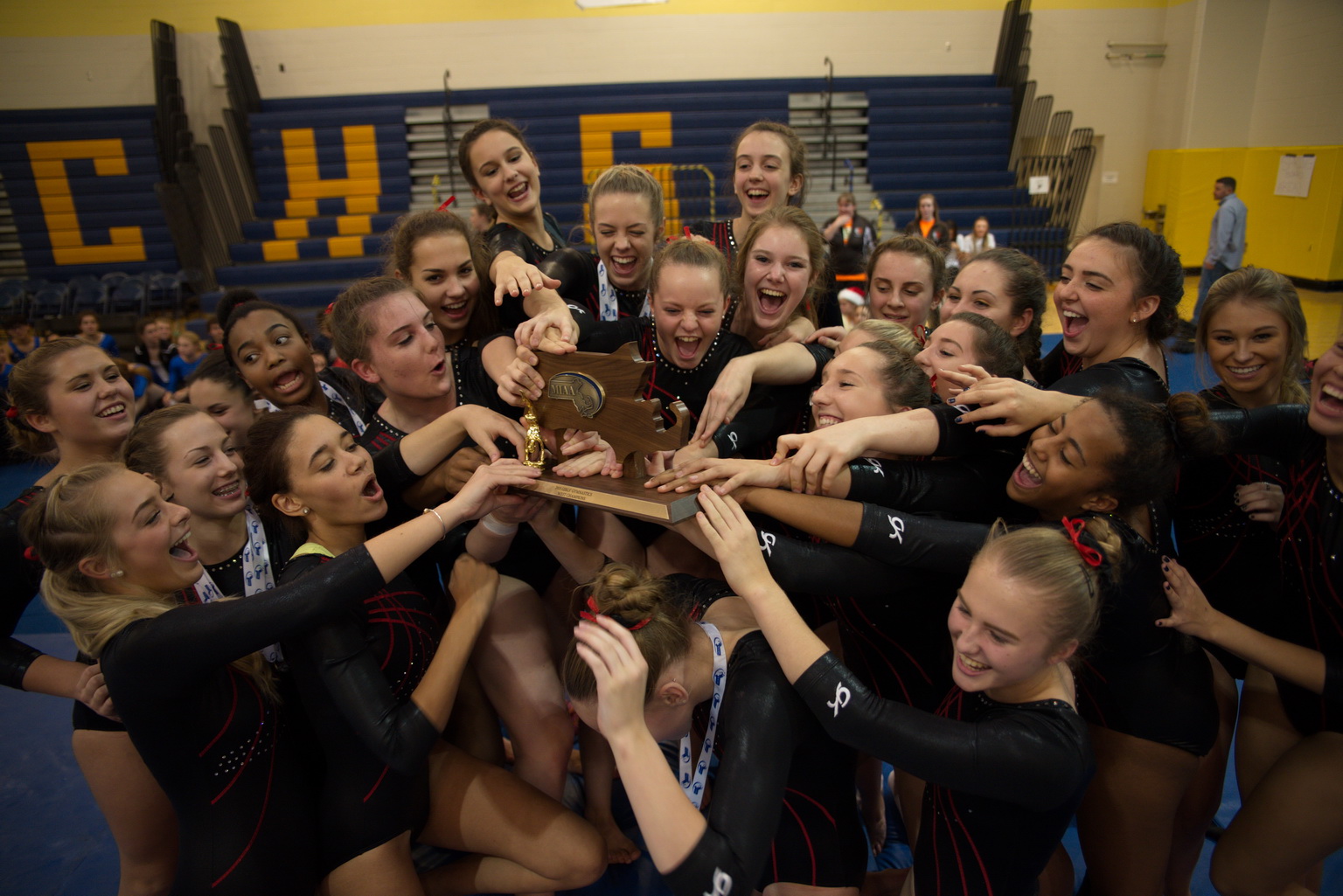 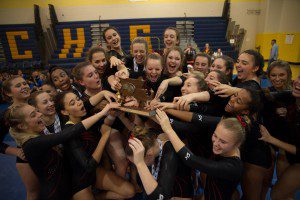 Fall 2015 offered a mix of excitement and sadness in the local sports world.
It was a time for celebration as the Westfield High School gymnastics team rang in its new season with yet another championship, extending its winning streak to infinity and beyond. Diehards and traditionalists wept when the Westfield and Cathedral high school football teams met on Thanksgiving Day for the final time in school history. The Whip City jumped for joy when it landed the 2016 Babe Ruth Baseball 14-Year-Old World Series, inking that deal this past fall.
Westfield High School proved to be a gymnastics factory once again, churning out another winner and elite gymnasts. 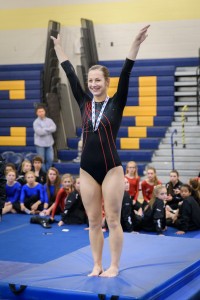 Westfield junior Liz Walker shook off any lingering effects of a concussion that sidelined her for three straight meets to emerge as the top All-Around gymnast at the West Sectionals. As for the Bombers as a whole? Oh, all they did was extend their record decade-long win streak to 157-0, winning their ninth straight championship.

St. Mary senior goalie Francesca DePergola holds the ball after recording her 1000th career save for the Saints this past ball. (Photo by Chris Putz)

St. Mary senior goalie Francesca DePergola enjoyed a remarkable feat of her own this past fall. DePergola made her 1000th save during a regular season game against Renaissance at Marshall Roy Field in Springfield. The senior keeper, in fact, went all out using her feet, arms, legs, hands, and head to try and keep the Saints in ball games all throughout the season.
Another player who earned MVP honors for his play on the field was junior quarterback Austin St. Pierre.
St. Pierre battled injuries nearly all season, limping on and off the field, all the while, leading his team on successful offensive drives. The junior QB, junior running back Wilton Royal, senior Dylan Wainscott, and a host of others ended the season a high note, trouncing Cathedral in an epic Thanksgiving Day rout, 50-0, for the final meeting between the two teams.
St. Pierre ran for three touchdowns and tossed another – a 71-yarder – in the blowout victory. 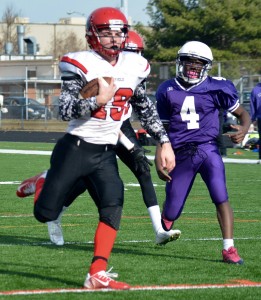 Westfield junior quarterback Austin St. Pierre rushes past Cathedral in the final game of the series on Thanksgiving Day 2015. (Photo by Chris Putz)

“We will be remembered for going out on a good note (in this series),” St. Pierre said. “We will go down in history.”
It was the final time the two teams would meet, following the merger between Cathedral and Holyoke Catholic to become Pope Francis late this year. A handful of alumni were on hand to witness the final meeting.
Westfield closed out the series by winning each of the last nine meetings, 14 of the last 15, and end with an all-time mark of 44-28. The Bombers opened the season 0-8, but finished on a three-game winning streak, and hope to build on that in 2016.
Two high-profile signings had the Whip City abuzz this fall.
Two-time Olympic women’s ice hockey silver medalist Kacey Bellamy continued her rise to glory, signing with the Boston Pride, of the National Women’s Hockey League.
It has been a journey like no other for the local sports hero, who grew up playing Westfield Youth Hockey, played for Berkshire School in Sheffield, and the University of New Hampshire, before starring on Team USA, the Canadian Women’s Hockey League’s Boston Blades, and now, the Pride.
Bellamy did not waste time making her mark in the NWHL as she became the first blueliner in league history to record a multi-point game with two assists in the Pride’s 4-1 win over Buffalo.
“It is an absolute privilege to (play) with the Boston Pride,” Bellamy told The Westfield News. “The NWHL is making history by the day and has been so supportive … To be able to play with my best friends in my favorite city, I couldn’t ask for anything better.”
Look for Bellamy to make yet another historic leap with another run at the Olympics in 2018.
While DeflateGate dominated the news all year, news of the dismissal of New England Patriots quarterback Tom Brady’s four-game suspension took a backseat to a more pressing local matter – signing a contract to host the Babe Ruth Baseball 14-Year-Old World Series in 2016. 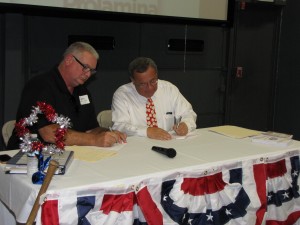 It’s official! A World Series is coming to town. The City of Westfield enters into an agreement to host the Babe Ruth Baseball 14-Year-Old World Series in summer 2016. (Photo by Lynn F. Boscher)

The city’s mayor, state and local officials, area business owners, Vice President and Commissioner for Babe Ruth League, Inc.’s International Headquarters Robert P. Faherty, Jr., Westfield Babe Ruth President Dan Welch, and residents and coaches with ties to local baseball met at the Shortstop Bar & Grill to witness the official signing late this year.
One of the most memorable quotes originated from the commish.
“This community is totally dedicated to hosting a World Series,” Faherty told everyone in attendance. “I was blown away.”
Several upgrades have been planned to Bullens Field as a result of the World Series, including the relocation of exterior fencing, the installation of a new handicap accessible ramp, reinforcement to the concrete bleachers, an improved backstop, additional seats, and new LED lights.
Westfield Babe Ruth will also seek out volunteers and vendors leading up the event late next summer. The league also launched a web site at westfieldworldseries.com.